Fun things to do in Chelsea

So what unique venues and experiences will help to give visitors a sense of the Royal Borough’s distinctive atmosphere and history? Here’s our guide of the most fun things to do in Chelsea.

by Ben Williams
in Travel 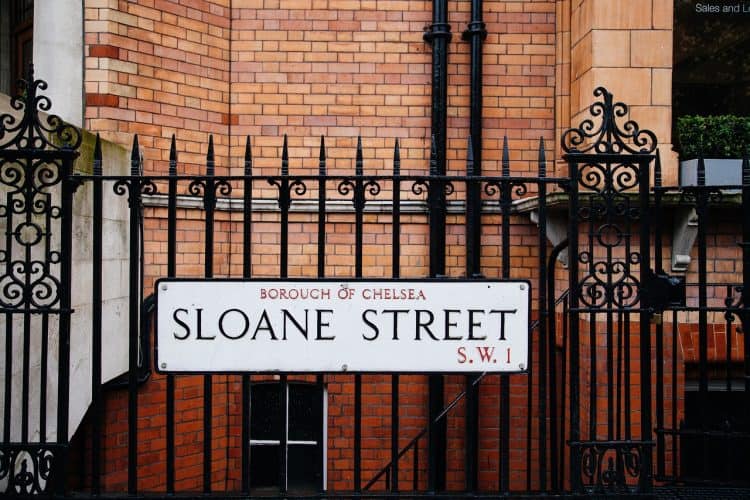 Chelsea has been one of London’s most fashionable and iconic areas for centuries, bridging the worlds of high society, the arts, fashion and bohemian café culture – and it’s got a globally famous football club too.

Shop ‘til you drop

The King’s Road was at the heart of the Swinging Sixties, when Chelsea boots became the must-have for every ‘dedicated follower of fashion’ and it remains a magnet for savvy shoppers, as do the glittering retail palaces around Sloane Street. This exclusive thoroughfare is dotted with exquisite boutiques from designer Emilia Wickstead, Dolce and Gabbana, and Jo Malone scents to Gucci and Giorgio Armani.

Most of the major names, like Cartier, Tiffany and Boodle’s have stores within a stonesthrow of Sloane Square. Whatever your budget, it’s a joy to window-shop and fantasise about owning this emerald tiara or that diamond pendant half the size of the Koh-i-Noor.

One Sloane Ranger favourite is Kiki McDonough’s store (12 Symons St, London SW3 2TJ.) Having made her name in the mid-1980s with striking but affordable pieces using paste and semi-precious stones, often adapted from Victorian and Edwardian settings, McDonough is now more mainstream and the brand now majors on rather pricier fine jewellery but her wearable and funkily modern pieces still reflect her impish personality.

Anyone is search of antiques and designer items including Victoriana, Art Deco and contemporary classics, often at bargain prices, should head for the Lot’s Road Auction Room. With its auctions also now staged online it has a worldwide clientele and many West Londoners still furnish entire houses from their ‘finds’ in the saleroom.

For quirky artisan stores and cafes, check out the achingly hip Pavilion Road, a picturesque paved  mews street.which has become a magnet for foodies since it was redeveloped in 2016. If you’re in search of a sourdough loaf, breakfast bagel or mid-morning donut, try the mouth-watering takeaway pastries at Bread Ahead – 249 Pavilion Road, Chelsea, London SW1X 0BP  This is both bakery and  baking school where you can take a half-day course and learn to create everything from flatbreads and Japanese melon pan to cinnamon-laden Victorian bakes.

Just down the street you can also pick up outstanding grass-fed free-range meat at Provenance Village Butchers (247 Pavilion Road, London, SW1X OBP) – and brush up your knowledge of the different cuts of beef, lamb and pork with a masterclass in choosing and cooking meat.

It’s not just about food either. For the ‘stationery village’ obsessive colleague or the writer in your life, Papersmiths – 170 Pavilion Road, Chelsea, London SW1X 0AW – a specialist stationers, boasts a fascinating variety of off-beat papers, cards and writing materials. They also stock an eclectic mix of travel guides, magazines and coffee table books, faintly reminiscent of Hugh Grant’s bookshop workplace in ‘Notting Hill’.

Among the scores of inviting bars and restaurants, the gastropub Surprise, run by Jack Greenall in Christchurch Terrace  has become one of Chelsea’s hotspots after a recent chic makeover. It retains its grand Victorian fireplaces and traditional charm but is now a perfect cosy pub that serves classic locally-sourced British food with a twist – though without being too pompous about it.

The Harwood Arms, London’s only Michelin-starred pub is also worth a detour, with its country house vibe, ostrich feathered lampshades and seasonal, sustainable menu. Among the highlights: its eco-conscious wild game and the meltingly delicious slow-cooked lamb shoulder, with gentleman’s relish, shallot cream and beans.

Locals swear by one of the area’s best-kept secrets, the authentic Italian restaurant La Delizia tucked away in Chelsea Manor Street –  Founded in 1986. It’s your classic small local joint, family-run and with a charmingly buzzy atmosphere.

Among the area’s more historic attractions is the Chelsea Physic Garden – four acres of glorious grounds sheltered by high walls on the Thames Embankment. Founded in 1673 by the Worshipful Society of Apothecaries, it is the only botanic garden collection focused on medicinal, herbal and useful plants and is a wonderful green space of calm and beauty.

The nearby Royal Hospital, an architectural gem designed by Sir Christopher Ween provides a fascinating slice of London history. It is home to 300 Chelsea Pensioners, all army veterans. It offers daily walking tours led by one of the residents in their time-honoured red livery.

For centuries, hundreds of historical figures, politicians and celebrities have made Chelsea their home, among them Thomas More whose manor house stood near what is now 381 King’s RoadChelsea, SW10 0LP. Its old orchard is now the site of the Moravian Church, the non-conformist chapel set up in 1742 by a Protestant missionary sect from Moravia and Bohemia, (the modern-day Czech Republic). It welcomes visitors and is a fascinating place with the early graves of its community set into the burial ground known as God’s Acre.

The blue plaques dotted around Chelsea are a boon to serious celeb-spotters and include many famous artists, writers and bohemians like Oscar Wilde  who lived at 34 Tite Street where he wrote The Importance of Being Earnest and The Picture of Dorian Gray. Wilde  was famously arrested for ‘gross indecency with other male persons’, in the Cadogan Hotel at 21 Pont Street. Lillie Langtry, the actress nicknamed the Jersey Lillie and mistress of Edward VII when he was Prince of Wales, also lived there before it became a hotel.

Others commemorated in the area include Winnie the Pooh’s creator AA Milne, Dante Gabriel Rosetti and his occasional lodger Algernon Swinburne, JM Whistler, George Eliot, the scientist Rosalind Franklin, Scott of the Antarctic and even Bob Marley. Margaret Thatcher, Britain’s first female Prime Minister, lived at 19, Flood Street but this does not yet sport a blue plaque.

Naturally the place is bursting with art and culture. The Saatchi Gallery in Duke of York’s Square, a short walk from Sloane Square and founded in 1985 by Charles Saatchi, is a must-see, showcasing the work of contemporary and emerging artists and photographers.

Admission is free for many exhibitions, whilst others charge a small entrance fee.

If you’re feeling ‘cultured out’ and you’re a football enthusiast, whether or not you’re Chelsea fan, why not round off the day with a guided tour of Stamford Bridge stadium, a treasure house of football memorabilia and the stories of this great club. The basic 1-hour tour costs £28 for an adult, £18 for a child – but if you fancy hearing the tales ‘from the horse’s mouth’, choose the authentic legends tour with former Blues greats Kerry Dixon or Ron Harris as your guide. It’s not cheap at £90 a head but for many, meeting their childhood heroes provides memories that last a lifetime.

Something for every interest and every budget

As you can see, there is more to Chelsea than privileged youths dramatising daily life in fine eateries, as depicted by the hit TV show, Made in Chelsea.

There is something here to suit every interest and every budget. Although, if you have made a special effort to get here, there’s no harm in treating yourself, just this once!