Wine-themed holidays are taken to the next level at The Vines, a global explorers' club. We join them in Priorat, Spain. 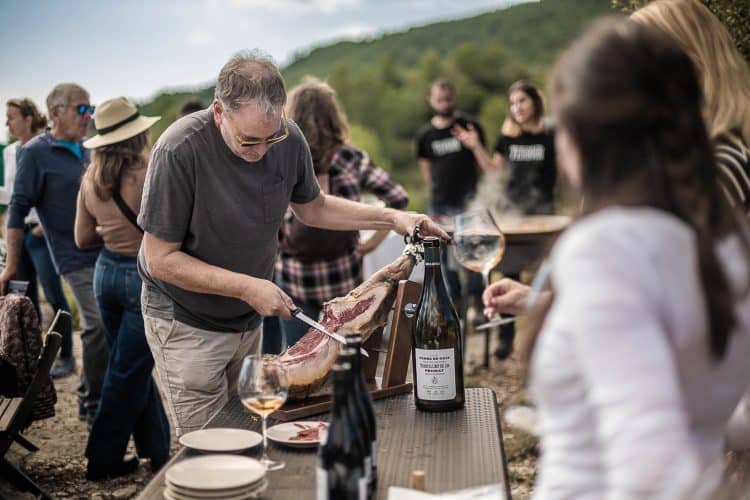 A wine trip to Priorat

It sounds like the stuff of dreams for wine-lovers: join a globe-trotting wine club that gets you access to a postcard-perfect luxury vineyard base in Mendoza, Argentina (whose owner, rumour has it, had to turn down a request to stay from Bono as they were at capacity).

But better still, it buys you a place on far-flung trips with once-in-a-lifetime experiences like a seat at a gala in Champagne where each house presents their new wines of the year, or being the first to try out small-batch wines straight from a globally prestigious winemaker’s cellar – all in a close-knit group of like-minded wine lovers.

It’s a no-brainer if you’ve got the spare $100,000 membership fee, and the time to roam around the world to indulge your passion.

It’s what’s brought a group of a dozen members to Priorat in Catalonia, Spain, an area famed for its robust reds. It’s the third destination in a The-Vines-do-Europe trip that visited the aforementioned Champagne region first, then Mosel in Germany for their famous white wines.

For the next few days, resident winemaker-in-the-know Dominik Huber of Terroir Al Límit is our man on the ground. His award-winning winemaking operation and his connections form the basis of our trip, while the Vines’ resident wine expert Marie Von Ahm is on hand to steer us along. It’s a heartening start that at our orientation tasting session – which takes place at sunset in our luxury boutique hotel Terra Dominicata, cradled in the valley of the Monstrat mountains – she promises not to be prescriptive and liken wines to things like pepper and cinnamon.

“We all have different tastes,” she says, with not a jot of pretentiousness. “So the only thing we can comment on is the mouth feel.” And so follows three days of wine tasting sessions (over 50 wines are served over the course of the trip) where you’ll never see an empty glass unless it’s at the behest of its owner.

The visit culminates in a wine-blending session in which each member gets to blend their own perfect Priorat wine – and perhaps buy a barrel of it for $16,000 for the ultimate memento of their trip. As the group meet outside the hotel for this finale, we realise it’s not our first morning tasting session.

“It’s because your palette is supposed to be at its sharpest first thing,” Michael Evans, the founder of the club, chit-chats to the group under the shade of a neat row of Cypress trees. “I don’t know about that,” replies Joel with a grin. “It depends what you’ve been doing the night before.”

As it happened, the night before was a big one. It was Evans’ birthday, which was celebrated at Celler de l’Aspic. The refined restaurant specialises in locally-produced wines, but that didn’t stop the waiters from pouring bottles of Champagnes like Emmanuel Brochet and Bollinger for toasts alongside an ever-appearing run of divine sharing plates.

It all sounds impossibly decadent, but the best bit is how low-key it is, if you can imagine privately hiring exquisite restaurants and popping open double magnums of rare wines as low key. Delightful conversations take place within the group at all times, yet there’s not a humblebrag in sight, and only light work chat – which is restrained considering how much of a valuable networking opportunity this is for a group of current or former CEOs and senior executives from the worlds of tech, business, finance and law.

Truly, guests are as comfortable in the luxury of the Hotel Dominica’s in-house restaurant being served rare wines by heavyweight Priorat winemakers Sara Pérez And René Barbier from their own collection, as they are in La Cooperativa, a rustic, family-fun restaurant in the unspoiled village of Perrora. In fact, on a culinary-heavy trip, La Cooperativa is the highlight of the gastronomic offerings, thanks to the dishes made with love and age-old recipes. Even now, at home on indulgent days, their dessert of melt-in-mouth chocolate chunks topped with flaked sea salt then drizzled with olive oil is now a regular occurrence, though I can’t say I bought the olive oil down the road at Siurana.

“It’s about the experiences money can’t buy,” says Marcelo, a top lawyer in Brazil and a member and investor in The Vines. We speak in a fitting situation. We’re being served freshly-cooked paella after sampling Terrior Al Limit’s wines atop the vineyard mountains of Serra de Montsant, where even the chilled water is served in stylish insulated glasses that we’re later gifted. “In Mosel, we took a boat trip along the Mosel River drinking the wines from each vineyard as we passed by them,” he explains. “You couldn’t have planned that yourself. And in Champagne, because we were hosted by a Champagne-making family, we were invited to the region’s black-tie gala where each house would offer that year’s Champagne with a course at dinner, as fireworks went off.”

This Spanish trip is the seventh travel experience for The Vines, and there are plans to expand it to total 12 wine-making destinations in the coming years, with sake-brewing in Japan and mezcal-making in Mexico also mooted. It’s a remarkable idea. As understood by anyone who’s tried an unlabelled bottle homemade wine in a trattoria in Italy, bought a bottle, and found it doesn’t taste the same at home, the drink is only part of the draw. In truth, it’s the whole experience that’s the most intoxicating thing of all.

Shilpa was a guest of The Vines.