By Joey Tyson The smell of a volcano is impossible to forget. Something between rotten eggs and a dodgy car exhaust, the stench of sulphur gags, clogging your throat for a second until the breeze blows over you. In short, it stinks. “Don’t spend too long down wind of the smoke,” our guide Jose sagely […] 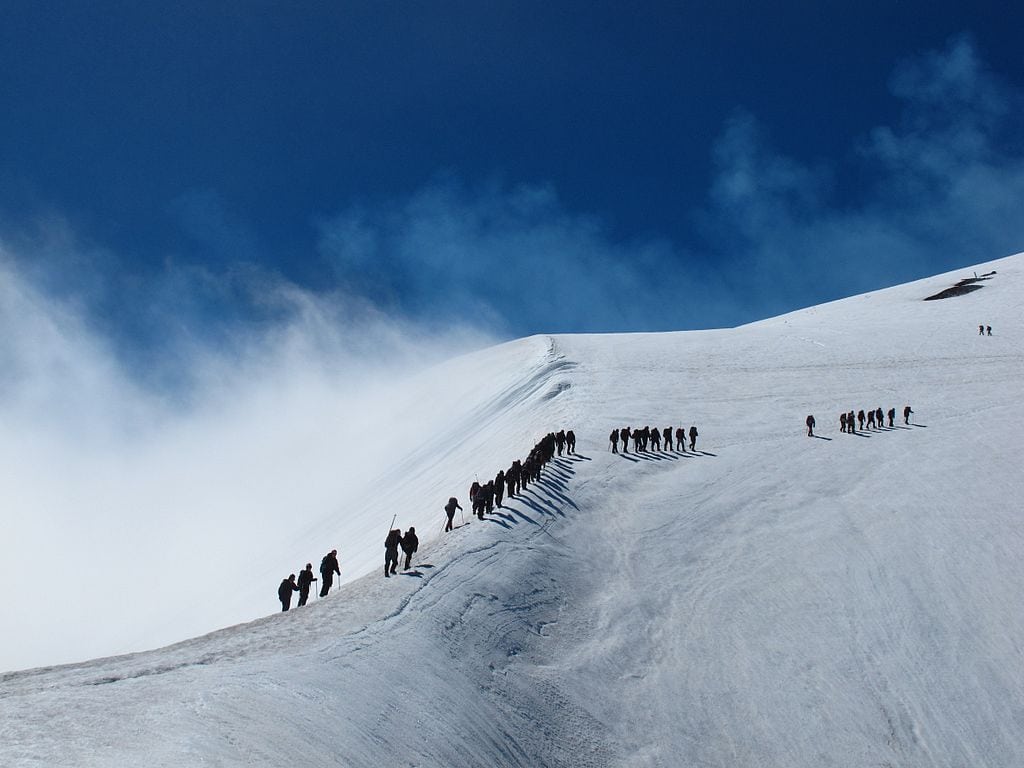 The smell of a volcano is impossible to forget. Something between rotten eggs and a dodgy car exhaust, the stench of sulphur gags, clogging your throat for a second until the breeze blows over you. In short, it stinks.

“Don’t spend too long down wind of the smoke,” our guide Jose sagely advises.

Stepping out of the smog to catch my breath, I take in the view for the first time.

From that height, everything looks blueish. The gleam of placid lakes mixes with miles of mountainous foliage, and the endless South American sky wavers on the horizon. Such a vista can make you complacent – it’s easy to forget you’re standing at the summit of an active volcano.

Not just an active volcano; the most volatile in Chile. Villarrica volcano stands over Pucón, a small town in the heart of Chile’s Lake District, known for serene volcanic lakes, hot springs and one, gigantic volcano. Pucón is calm and placid, more like its lakes than its volcano. Villarrica has a bit of a temper; erupting some seven times in the last 25 years, it’s one of the few constantly active stratovolcanoes in the world.

It’s from Pucón that the expedition to climb the 2840m-high volcano begins, bright and early at 6.00am. Probably because the volcano is still shrouded in darkness.

A squat guide in hiking gear runs through the paper work, noting our passport numbers and personal details, checking that we have insurance. Once the boxes are ticked, we’re assigned our equiptment: a jacket, pick axe, crampons, small plastic sled and a helmet.

Each helmet has a name fixed on with scotch tape so we know which is ours. Incorrect names have been a running joke among our group so far in South America and Chile doesn’t disappoint. I find mine, “Joey”. Easy enough to spell. My friend Kieran isn’t so lucky: he’ll be climbing the mountain as “Kigran”.

For what is in part a technical climb, the guides seem bizarrely relaxed, asking very few questions about our fitness or ability. Just another day at work for them, I tell myself. Still, I’ve never had an office that could explode beneath me.

Once we have our gear we pile into an old, rusty 4×4 and head on to the base of the idling giant.

Driving along, the volcano never stops staring. It hangs over Pucón, its monstrous presence lingering ominously out of the car window. A constant plume of thick grey smog billows from its open mouth and as daylight spreads across the sky, like a rapidly healing bruise, somehow it grows, daring you closer.

A voice from the back asks the inevitable question, the one we’re all thinking: “what are the chances of an eruption?”

Jose laughs. Trust me, he says, we wouldn’t be going anywhere near Villarrica if there was a chance of eruption. His ease seems to calm the car. We joke among ourselves: as if anyone would climb a volcano that could potentially explode. How well can they predict these things, really though, I wonder? By the time we reach the volcano, it’s fully light. The ski lift that takes hikers half way hangs silently in the bright Andean sunlight and a lone condor circles lazily above us. We’re here out of season so the lift is not an option. This adds over 500m to our climb, but the guide thinks we’re fit enough to handle the full hike.

“We better get going”, he says and just like that we set off. No shortcut for us.

Tracing a route through the ashy rubble, Jose leads us upwards. We clambering over loose stones, each step taking us closer to the smoke.

After two hours of hard walking over black volcanic rock, we reach the first snow. The guide points up to the smoking summit, as if to say: “now it’s time for the hard bit”. Hundreds of feet above us, tiny black figures are zig-zagging their way up the snow in single file, like ants marching back to the nest.

The group pauses to strap on our crampons and Jose sees this as a good opportunity to casually slip in some safety advice (the first of the climb).

“If you slip and fall, use your ice pick to slow yourself down”, he says, taking out his ice pick and demonstrating by laying on the ice, holding the pick at hip level, shifting his weigh onto the make-shift hand break. It’s hard to tell whether he’s joking or not, so nonchalant is the delivery. Quickly, I remember that health and safety hasn’t been a huge concern in South America so far and practice breaking for myself, just in case.

Walking at altitude on deep snow is not easy. Each step is a thigh burner, your foot crunching down into the ice. I snatch a glance upwards in-between steps, brilliant sunlight bounces off the white surface, dazzling me for a second. It’s hard going and it turns out Jose is pushing us more than usual because he thinks we can handle it.

An hour and a half of tough slogging later we reach the summit. The crater, gaping and smoking, slopes down into the heart of the volcano in an ominously steady way. It’s not a sheer drop, but a slip would see you tumble down the loose rock into the caldera just the same.

I pick my way around the crater carefully, a heady cocktail of altitude, adrenaline and sulphur making the moment more surreal, more vividly brilliant. If it blows now, we’re fucked, I think to myself. I see a land of mountains in all directions. Chile’s famous spiny backbone stretches out into the distance and Jose points to Argentina in the east: it really does feel like we’re on top of everything. I notice that Pucón isn’t that far away; they must have a cracking escape plan.

Jose flashes me a manic grin and points to the small plastic sleds we’ve been carrying.

“This is how we get down,” he says, pointing at the sled and a series of grooves in the snow. “We slide down.”

I should be surprised, but I’m not. Why wouldn’t you sledge down a volcano on a piece of plastic?

Jose, ever the safety guru, gives us one last demo with the pick axe break and we’re off, slaloming rapidly down the crudely cut course, crashing into the sides and one another. It’s quite laughable how dangerous this is, but it’s also really, really fun.

Finally, the snow runs out and we walk the rest of the way back down. A few years after my climb, Villarrica volcano exploded. No one was on the volcano.