By Phil Norris Pulling up outside Zadar’s Old Town at dusk after a brief jaunt up the Adriatic Highway, I was acutely aware that this imposingly beautiful setting would be best accompanied by a frosty pivo. Over the next two days, I fulfilled this (admittedly very achievable) goal many times over, as I explored an offbeat […] 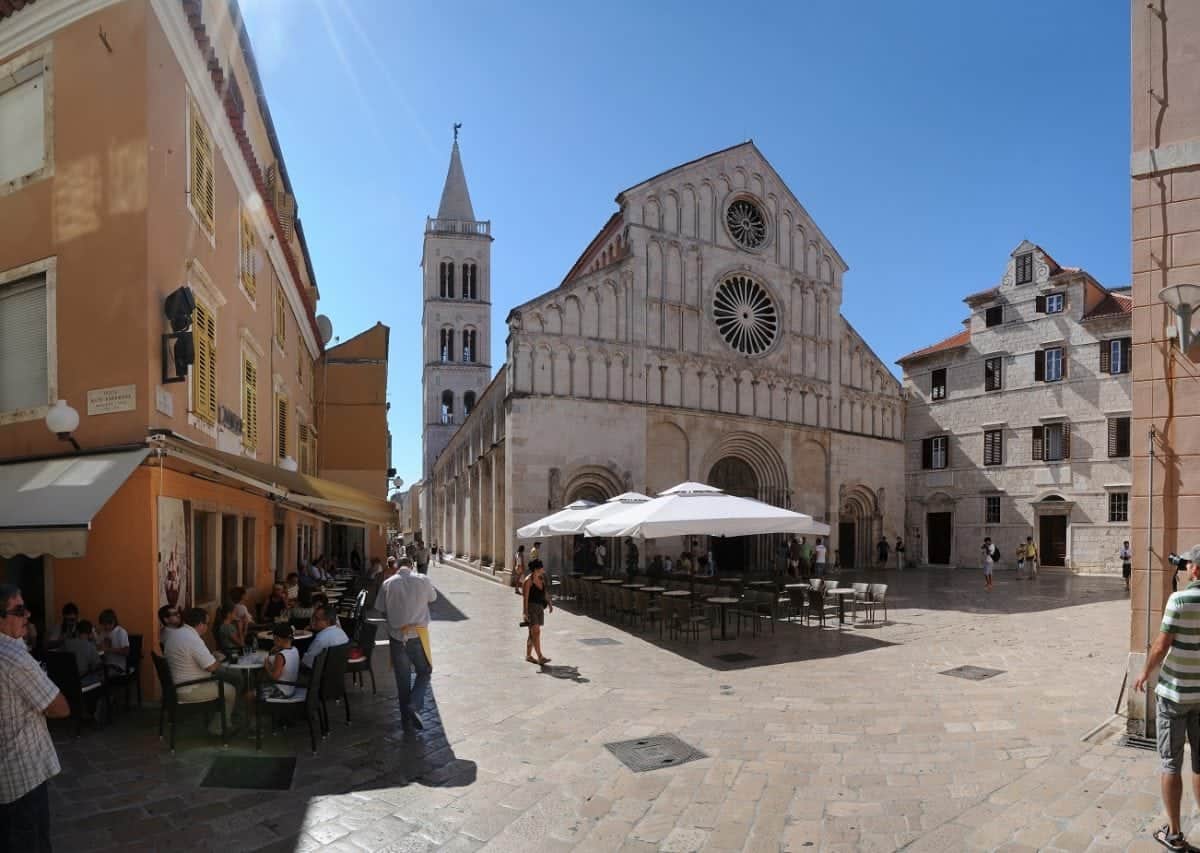 Pulling up outside Zadar’s Old Town at dusk after a brief jaunt up the Adriatic Highway, I was acutely aware that this imposingly beautiful setting would be best accompanied by a frosty pivo. Over the next two days, I fulfilled this (admittedly very achievable) goal many times over, as I explored an offbeat city made up of brutal socialist-era architecture, winding Dubrovnik-esque alleys, Roman ruins, tourist-filled squares and tiny, dimly-lit watering holes.

On the face of it, Zadar is far harder to love than the glittering Dalmatian jewel of Dubrovnik and its pristine, marble-clad Old Town. Yet while it’s often a little rough around the edges, Zadar has never been short on tourist appeal. Half a century ago, Alfred Hitchcock declared the sunset from Zadar to be unparalleled anywhere on Earth, and in 2016 it was named Best European Destination, seeing off competition from the likes of Athens, Paris and Rome. I was eager to find out why this city of just 75,000 people has long caused such a stir, and I wanted to do it the only way I know how: through beer.

After locating our diminutive apartment on the studenty Stomorica ulica, right in the heart of the Old Town, my girlfriend and I headed out in search of a hard-earned half-litre of Ožujsko – the flagship lager of Croatia’s biggest brewery, Zagrebačka pivovara. Named after the month of March, when the best beer was traditionally brewed, it’s a pleasantly refreshing – if somewhat thin – lager that’s pretty much indistinguishable from its main competitors, Karlovačko and Pan. Served chilled and with a smooth, creamy head, it definitely quenches the thirst. Croatians – who lovingly call it Žuja (pronounced jew-ee) – certainly seem to agree, consuming an average of ten bottles every second. We didn’t have to venture far for our first taste of Zadar’s drinking scene: Providenca, a lively alleyway bar with a hearty menu and a surprisingly warm welcome (by Croatian standards), was located just around the corner on Varoška ulica. If anything, the food was a little too hearty: the burgers we ordered were a solid eight inches in diameter, leaving us feeling like we’d unwittingly entered an extreme eating contest. Our “prize” for finishing the coronary-inducing meal was a shot of what our waiter misleadingly described as “Croatian schnapps”: travarica rakija, a herbal brandy that tastes exactly like being karate chopped in the windpipe. However, I shouldn’t speak so churlishly of Providenca. The staff were fun (our waiter later told us that particularly low-quality rakija is used as cleaning fluid) and the prices were low, with a half-litre of pivo costing a mere 18 kuna (around £2) – a far cry from the sky-high prices of Dubrovnik.

Next up was something of a local institution. Kult, situated all of ten metres away from our apartment on Stomorica ulica, is big with the student crowd. It boasts a large terrace packed with tables and thronging with revellers, but the real fun is to be had in the dingy, smoky interior across the street. Here, we perched at the bar to drink yet more cold lager, enjoy the excellent musical selection, and struggle in vain to attract the attention of the delightfully surly barman. He went to extraordinary lengths not to serve us, avoiding eye contact, aggressively polishing glasses, and at one point taking our order then leaving the bar entirely, only to return several minutes later. Despite his efforts, by midnight I found myself a little “tired and emotional”, so we returned to our tiny flat for an extremely deep sleep. Hangover or no hangover, waking up in Zadar is nothing short of a delight. Locals gather outside cafes to sip strong black coffee and breakfast on prosciutto, bread and olive oil. We took a short stroll to do just that at Caffe Bar Doma, a buzzing little eatery on Varoška ulica that was seemingly guarded over by a militia of stoic-looking, chain-smoking middle-aged men.

Refreshed and refuelled, it was time to venture out of our bustling little corner of Zadar to take in the many sights of the Old Town, which was at one time the largest city-fortress in the Republic of Venice.

First up was the imposing Land Gate, built by the Venetians in 1543 next to the quaint Foša harbour and once the main entrance to the city. It was here that we got our first glimpse of Zadar’s troubled recent history. From mid-September to early October 1991, the city was besieged and shelled by the Yugoslav People’s Army – under the authority of then-Serbian President Slobodan Milošević – in response to the Croatian government’s declaration of independence from the Socialist Federal Republic of Yugoslavia. Today, you’ll see few – if any – physical war wounds from the bombardment. However, we found an initially innocuous-looking sticker affixed to a lamp post just outside the Land Gate, carrying the words “Serbian Family Tree” under a cartoon silhouette of two men hanged from branches. It was a stark illustration of the intense anti-Serb sentiment felt by some Croatians to this day. In a slightly more ruminative mood, we continued our walking tour of the Old Town, taking in the 11th-century St Mary’s Convent, the iconic round Church of St Donat, dating back to the 9th century, and the ruins of the Roman-era Forum. Unlike Dubrovnik, Zadar’s historic sights rub shoulders with some far less illustrious structures. At either end of the Roman Forum stand two incongruous socialist-chic apartment blocks, while the Church of St Donat sits opposite the faintly brutalist Archeological Museum.

One of the Forum’s highlights is the so-called Pillar of Shame, where minor offenders were once chained up and publicly pilloried. Stood next to the pillar, with the morning’s hangover far from a distant memory, I couldn’t help but empathise with those Roman-era miscreants.

Strolling around this idiosyncratic town had given us much to reflect on – and what better way to do so than over some mid-afternoon suds? We headed to Liburnska obala to find The Garden, Zadar’s trendiest drinking spot. Perched atop the city walls, The Garden offers superb views across the harbour to the new town, and feels more like an exclusive beach club than an Old Town bar. Occupying what was previously the overgrown garden of an abandoned hotel, it boasts an interesting selection of beers. Eschewing the ever-present Žuja for more eclectic fare, the drinks menu included the excellent Zmajsko Pale Ale, a hoppy, citrusy American-style ale from Zagreb-based microbrewery Zmajska Pivovara. Sadly, only upon leaving Zadar did I learn that The Garden is part-owned by UB40 drummer James Brown, thus robbing me of a major punning opportunity (me to barman: “How’s the food hygiene rating here? Only, I heard there’s a rat in your kitchen,” etc). With its laid-back air, luxurious cabanas, and an enticing food menu produced in conjunction with vegan and raw food specialists Art of Raw, I could have happily whiled away an entire day at The Garden, but in the name of travel journalism I forced myself to press on. What’s more, the evening had rather crept up on us, which meant it was time to hotfoot it to Zadar’s most audiovisually impressive attractions: the Sea Organ and the Sun Salutation, designed by local architect Nikola Bašić.

Thronging with tourists from early evening until late into the night, the Sun Salutation is a feast for the eyes, comprising a large circle of photovoltaic cells that harvest the Sun’s energy throughout the day and release it in dizzying patterns of multicoloured light after dusk.

Sadly, and without wishing to besmirch Bašić’s good name, the Sea Organ – a musical instrument powered by the waves that wash up against Zadar’s Riva – was somewhat less mind-blowing. Perhaps the tranquil Adriatic waters simply weren’t strong enough; perhaps the ethereal notes produced by the organ’s pipes were drowned out by the gargantuan engines of a nearby cruise ship; perhaps it was closed for maintenance; but for some reason the instrument lay eerily silent.

Stoic in the face of a malfunctioning Sea Organ, we left the crowded seafront to duck back down some Old Town alleyways in search of a good old-fashioned Croatian boozer. Unsurprisingly, we didn’t have to walk far: perched on the edge of the gorgeous Trg Svete Stošije (Market Street Anastasia) was the relaxed Caffe Bar Lloyd. Belying its touristy name, this authentic little watering hole is popular with the local crowd, drawn by its cheap prices, adjacent ice cream parlour (Donat), and enviable location opposite the Romanesque 12th-century Katedrala sv. Stošije (Cathedral of St Anastasia). In short, it’s a perfect spot to unwind with a beer and take in the evening korzo (parade), the point in the evening when Croatians get together to stroll the streets, chew the fat, and enjoy a quiet drink.

Night had fallen, but our next stop wasn’t one of Zadar’s many fine eateries. Instead, we headed to the tiny, bohemian Djina Gallery Bar. Located just off the main square at the top of Varoška ulica, it attracts artsy types of all ages – the owners have somehow even crammed an art gallery into this atmospheric little space. But if you’re expecting an upmarket wine bar, you’ll be sadly disappointed: Djina is crowded, smoky and loud, and it’s all the better for it. Perched on high stools at the bar, we couldn’t resist staying for a second round. And when, at that point, the barmaid presented us with a bowl of ready salted crisps, I was overcome by a moment of acceptance comparable only to the way Billy Elliot must have felt when his dad took him to his Royal Ballet School audition.

More by luck than judgement, we found ourselves nearing home and the comforting presence of Crazy Pizza, an astoundingly cheap and surprisingly delicious takeaway located mere seconds from the entrance to our apartment. With last orders looming, there was time for one final pivo at Caffe Bar Borgo, another miniscule Varoška ulica hotspot where the rowdy local crowd spill out onto the busy, marble-clad street.

Our Croatian road trip took us from Dubrovnik to Split, then onto the island of Brač, Trogir, Pag, the stunning waterfalls of Plitviče, and the underrated capital, Zagreb. But while each offered something different, none felt as intimate, authentic, gritty, and beguiling as Zadar. Not even a dose of industrial-strength rakija could dampen my affection for this intriguing city.