Eighteen years since Fatboy Slim’s first Big Beach Boutique heralded Brighton as party central, its reputation as a creative powerhouse continues. Inspired by the fresh sea air, the glorious South Downs just behind it, and the delightfully different outlook of its outgoing residents, it’s still one of the most vibrant cities in the UK for […] 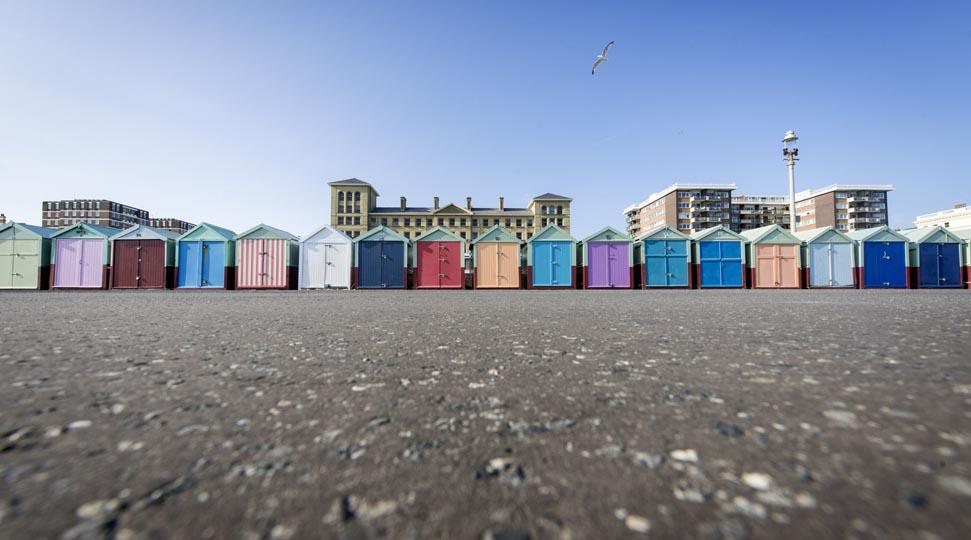 Eighteen years since Fatboy Slim’s first Big Beach Boutique heralded Brighton as party central, its reputation as a creative powerhouse continues. Inspired by the fresh sea air, the glorious South Downs just behind it, and the delightfully different outlook of its outgoing residents, it’s still one of the most vibrant cities in the UK for culture. Yup, even more so than London, in which world-leading arts offerings inevitably grapple with the inevitable rat race – and not just the Banksy kind.

So while today’s Brighton is worth visiting for famed attractions like the entertainment of Brighton Palace Pier and the stellar views of the British Airways i360, there’s plenty for the artistically-minded to enjoy, from the craft shops found in the narrow pedestrian routes of The Lanes to the innovative cuisine found in Brunswick Town. Here’s our guide to the artiest of weekends in Brighton.

First thing’s first: there’s no end of galleries, from the IO Gallery to my personal fave, artrepublic. Why do I heart it so? Because it’s accessible to both art fans with only a passing interest, and hardcore industryheads alike (in an industry which is often snobbish, that’s appreciated). More like a shop than a gallery, you’re free to wander and admire, and it’s busy enough that you can do so without any pressure to buy…though there’s plenty that will tempt you, from four-figure works by Damien Hirst and Grayson Perry, to Van Gogh prints.

Even if they’re not out to replace any gallery, Brighton’s many independent shops – from those tucked away in the Laines, dotted along the arches on the seafront or hidden as neighbourhood gems – are full of craftful ideas and stuff for sale. Make sure any trip to Brighton involves lots of mooching time.

If all the visual delights prove inspirational, the Painting Pottery Café is on hand to unleash your inner artist. In my visit, there’s plenty of adult friends having a go as well as families. The deal is: you pick your item – I went for a jug, my pal went for a Día de Muertos-type skull, you’re given a quick tutorial on how to paint it, and then given all you need to make a work of art (or a giant mess). I forgot how much I enjoyed craft-y things until I emerged from the shop after three hours of intense concentration that flew by in a second. As it needs to be glazed and fired, I received my jug in the post a week later, and now it’s taken pride of place on my windowsill – a lovely reminder of my art weekend in Brighton.

One of the most wonderful quirks of Brighton is The Royal Pavilion, a magnificent onion-topped former royal residence, designed by John Nash. It’s satisfying enough to sit in the nearby park and admire its beauty from outside – but don’t call us superficial: it’s beautiful on the inside too. I mean, the weekend of my visit coincided with an exhibition of Stephen Jones’ hats, in which the milliner’s most celebrated creations (made for luminaries like Princess Diana, Grace Jones and Kylie Minogue) are dotted around the drawing rooms, bedrooms and receptions of the building. But forget classing it as a retrospective; working with its surrounds, it’s a very site-specific art installation. The exhibition runs until 9 June 2019, and well worth the hour-long trip from London.

In a city known for its myriad of dining options, it’s no surprise that some are more creative than others. One of the go-to places in 64 Degrees, a cute corner eatery along The Laines that you might well miss. Some of the tables are effectively chef’s table: my pal and I are seated at bar tables joined onto the kitchen, which allows us to watch the chefs at work.

It’s here they make culinary art using fascinating: the translucent slices of Tokyo turnip carpaccio are as pretty as a picture. The tastes are sublime too; weeks later, I still can’t forget the taste of the double-cooked Jerusalem artichokes served with their signature 64 degree egg yolk and truffle dip (throughout the night, we watch how much fresh truffle they shave off for each dish. It’s extremely generous each time). The wine list is exemplary too; again, weeks later, I’ve finally sourced the 2017 Kore Grillo organic wine from Sicily to buy; it was such an unusual balance of crisp and fruity that I needed to have more of it in my life.

With on-it service and reasonable prices too, it’s a Brighton highlight – just make sure to book in advance as it’s a small restaurant.

Another artful option is Terre a Terre. Renowned as one of the oldest and best vegetarian restaurants in the UK, its substantial offerings, many of which mimic their meaty counterparts, are enough to make a flexitarian out of a carnivore at the very least. They’re the home of the original KFC (that’s Korean Fried Cauliflower), and their wine list is heavy with Sussex wines, but if that’s not reason enough to pay a visit, just try their Chocoholic dessert.

It’s an Alice in Wonderland-evoking plate of surprises and treats, including the lightest, crispiest churros with a thick chocolate salted caramel sauce (with extra fruit to soak up the rest of the sauce), a mini brandy chocolate milkshake, chocolate hazelnut cake and pieces of fudge dotted around in what’s arguably the most beautiful dessert I’ve eaten, in both looks and taste. At £12 per person it’s a meal in itself, but worth the indulgence on a special night out.

In between the comfort of chain hotels and the functionality of budget B&Bs, there’s a good selection of boutique hotels that highlight Brighton’s visually appealing side – and none more so than the Artist Residence. Taking a discreet spot on Regency Square, it’s a refurbished duo of townhouses brought together with no end of funky art on the wall, from neon lighted washing lines to pop art on the bedroom walls. The rooms are a bijoux size and the floorboards from above can get noisy, but that’s city living for ya.

Instead, focus on the cool touches, like uniquely-designed rooms, Organic Bramley toiletries in the bathrooms, and Nespresso machines a super fun (but paid-for) hospitality tray with artisan snacks. The bar is divine too – it’s a cosy little front room that’s the perfect place for a social but low-key night out, fuelled by inventive cocktails. It’s since transplanted the format to other cities, but the Brighton location is the original and arguably, the best.

Shilpa was a guest of VisitBrighton.