The Conservative Party spent nearly a million pounds on Facebook ads since October.

by Ben Gelblum
in Tech and Auto, Technology, World News 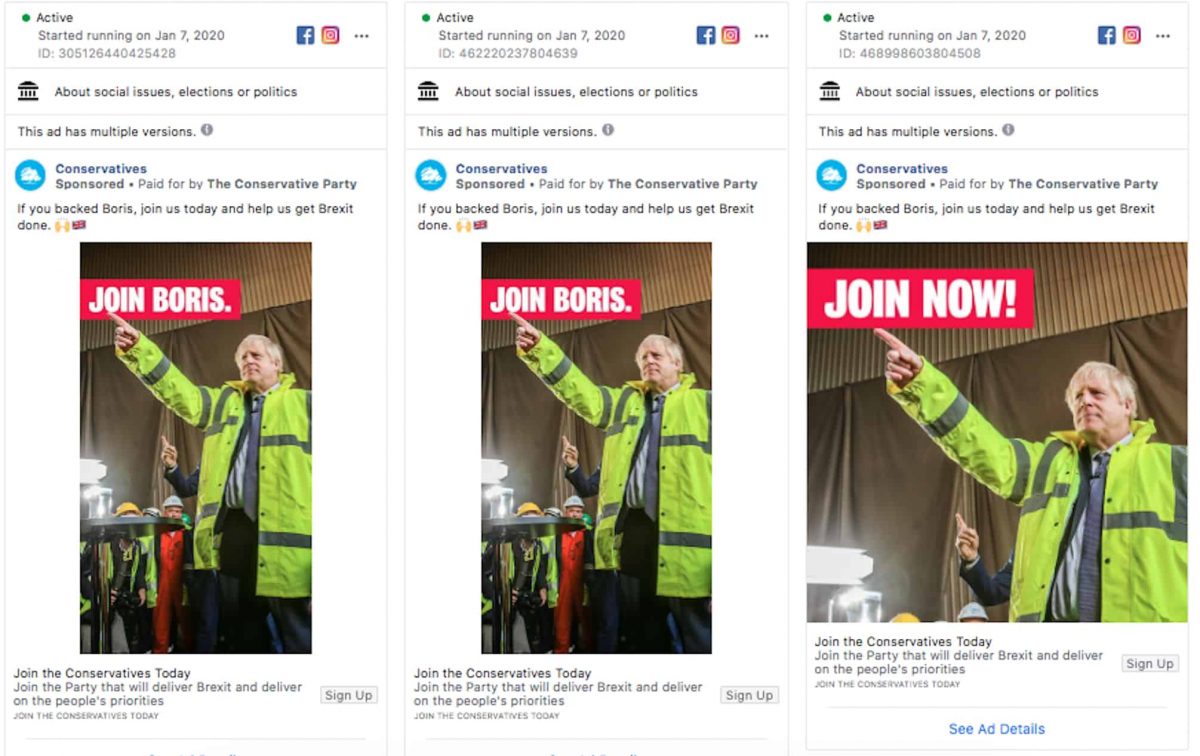 Facebook has insisted it will resist pressure to ban political ads and said it will not limit targeting like tech rival Google has announced it will.

Fact-checking of political ads also remains off the table as Facebook prepares for the 2020 US presidential election.

During December’s UK General Election, fact checkers found that while 0 per cent of Labour adverts they looked at were misleading, a shocking 88 per cent of Conservative ads misled voters with claims that were incorrect. The Conservative Party splurged almost a million pounds on Facebook advertising since last October. (Facebook allows you to see their spend and paid ads like those above by clicking here.)

The Coalition for Reform in Political Advertising called for all political advertising to be subject to fact-checking as a legal requirement following what it describes as a “fake news and disinformation general election”.

Facebook’s controversial announcement will dismay many concerned by the way democracies are being hijacked by the unprecedented reach of highly targeted political untruths.

In the UK there was a massive splurge on Facebook advertising in December’s election. The Tories appeared to replicate the ad strategy of Vote Leave in 2016, which used data controversially harvested by Cambridge Analytica to target voters.

The Digital, Culture, Media and Sport Select Committee investigation into the Vote Leave campaign breaking the law left serious questions unanswered by Dominic Cummings, Michael Gove and Boris Johnson about what they knew of the illegal activities.

Michael Gove was the co-Convenor of Vote Leave’s Campaign Committee in the 2016 Referendum. Michael Gove has admitted publicly that he knew of the payments to AIQ which led to the commission of electoral offences in 2016. Gove is now responsible for electoral conduct as Secretary of State for the Cabinet Office. Needless to say, regulations have clearly not kept up with the use of social media for political propaganda, and nothing has been changed in Britain since the EU Referendum in 2016.

Facebook said it had considered a similar approach to Google which is restricting targeting of political ads, but heard about the importance “for reaching key audiences” after speaking to a range of non-governmental organisations, non-profits, political groups and campaigns, including both Republican and Democrat committees in the US.

Perhaps to soften the policy statement, two days earlier a leaked internal Facebook memo by a top exec Andrew Bosworth was published in the New York Times in which he said that as a liberal he “desperately” wanted the President to lose. However, he added, the company should avoid hurting Donald Trump’s campaign.

The rules on lying in political ads should not be changed he wrote, even though it may “very well lead to” Donald Trump’s re-election as President of the United States in 2020. According to the paper, dozens of Facebook employees argued against him that politicians should be held to the same standards as other Facebook users.

Instead, the social networking giant is now opting to provide people with more transparency, making it easier to use its online library of political ads, as well as improved controls allowing users to see “fewer” political and social issue ads.

Which makes the firm’s £500,000 ($652,000) UK fine following an investigation into the use of personal data in political campaigns seem like peanuts. The UK’s Information Commissioner’s Office said last years that the tech giant had agreed to pay the “monetary penalty notice” without admitting any liability.

Last autumn, US presidential hopeful Elizabeth Warren highlighted her own concerns over Facebook’s political advertising policy by paying for a series of adverts which included false claims about Mr Zuckerberg.

The adverts, which successfully appeared on the social network, claimed the Facebook founder had endorsed US President Donald Trump for re-election next year, before suggesting they had given politicians “free rein to lie” on the platform.

During the UK’s 2019 General Election campaign we reported how Conservative ads misleading people on Facebook using doctored BBC news headlines were removed by Facebook. The ads with doctored headlines were viewed between 220,000 and 510,000 times according to Full Fact, an independent charity who work alongside other organisations on Facebook’s Third Party Fact Checking programme which discovered the Tory slight of hand.

Facebook also stopped ads paid for by taxpayers’ money targeting swing constituencies with promises of Government cash injections, as they had not been labelled as political ads.

But the sheer scale of the problem is immense.

The independent Electoral Commission and Information Commissioner have both made clear, repeatedly, the current unsafe and outdated state of rules relating to British elections.

Rob Leathern, Facebook’s director of product management, said the firm was “not deaf” to the criticism and public debate received in response to its stance on the issue.

The social network maintains that decisions about political ads should not be made by private companies and argues for regulation that would apply across the industry.

“In the absence of regulation, Facebook and other companies are left to design their own policies,” Mr Leathern said.“We have based ours on the principle that people should be able to hear from those who wish to lead them, warts and all, and that what they say should be scrutinised and debated in public.”

Yet ahead of the UK general election, Twitter decided to ban political ads entirely, as did TikTok, while Google banned advertisers from targeting voters based on their political affiliation.

Twitter chief executive Jack Dorsey said political message reach “should be earned, not bought”. He said in a series of tweets: “A political message earns reach when people decide to follow an account or retweet.

Ian Lucas also wrote in The London Economic about the  extraordinary lengths to avoid scrutiny over Vote Leave offences that Boris Johnson, Michael Gove and Dominic Cummings have all gone to.

Facebook said on Thursday that expanded transparency features will be available from the first quarter of 2020 in countries where “paid for by” disclaimers are placed on political ads.

Meanwhile, political ad controls will be rolled out from early summer in the US ahead of the presidential election, before eventually expanding to more locations.