The findings showed that, concentration-wise, the phone contained 100 times more gold – and 10 times more tungsten – than geologists would call ‘high-grade’. 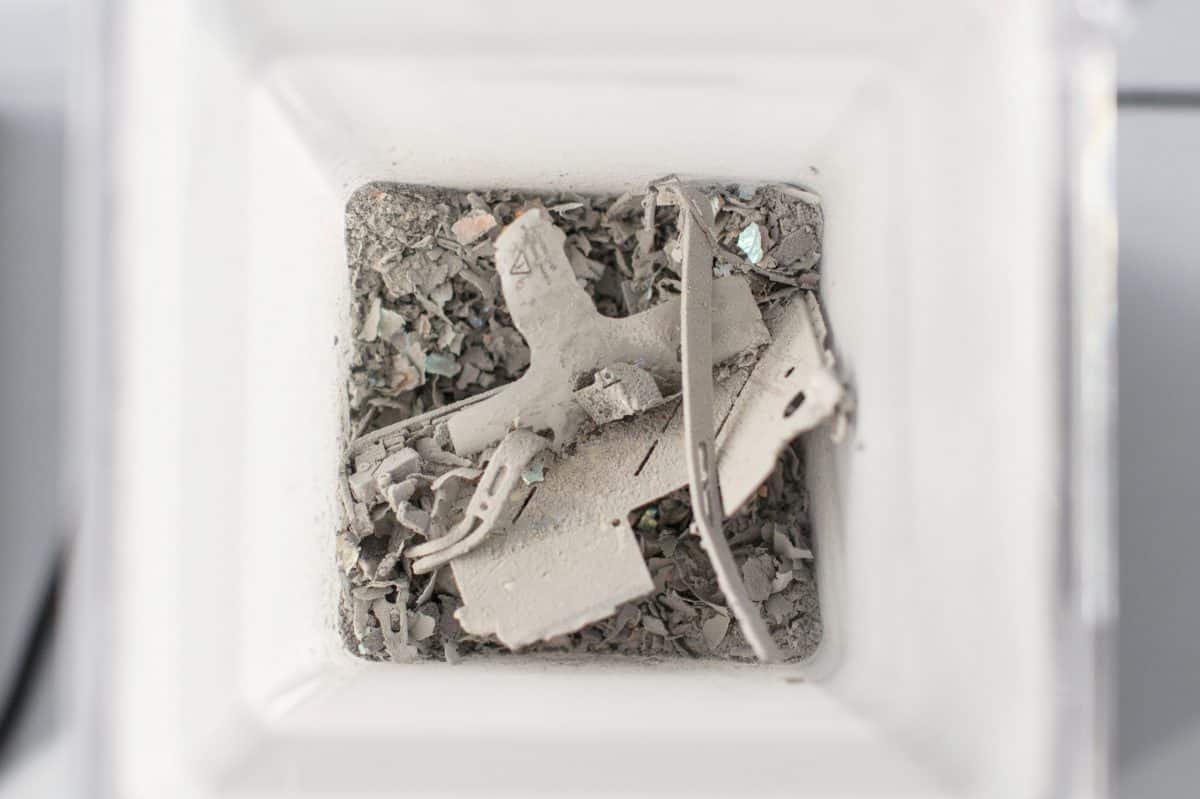 Scientists shoved a smartphone into a BLENDER to analyse its contents.

The iPhone 4S with the battery removed was ground to dust before chemicals were used to analyse the make-up of the popular device.

They discovered that to create just one phone you would need to mine 10 to 15 kilos of ore, including seven kilos of high-grade gold ore, one kilo of typical copper ore, 750g of typical tungsten ore and 200g of typical nickel ore

The findings showed that, concentration-wise, the phone contained 100 times more gold – and 10 times more tungsten – than geologists would call ‘high-grade’.

The aim of the project, to coincide with British Science Week, was to show the quantities of rare or so-called ‘conflict’ elements each phone contains, and to encourage greater recycling rates once the devices reach the end of their useful lives.

Every year, 1.4 billion mobile phones are produced around the world.

Scientists at the University of Plymouth wanted to know what they are made of, where the materials come from, and what is the best thing to do with the devices once we’ve no more use for them.

By blending an entire iPhone to dust, and then conducting a chemical analysis of the dissolved results, they hoped to show why we should all take a keener interest in what is contained in everyday electrical items.

The project was conceived by University of Plymouth geologists Dr Arjan Dijkstra and Dr Colin Wilkins.

Their initial interest was sparked by the increasing reliance of high-tech everyday items on rare mineral resources putting new demands on the global mining industry.

They then worked with Devon-based animation firm Real World Visuals to produce a short video which shows the amount and variety of the Earth’s resources used each year in global mobile phone production.

Dr Dijkstra said: “We rely increasingly on our mobile phones, but how many of us actually think what is behind the screen?

“When you look the answer is often tungsten and cobalt from conflict zones in Africa.

“There are also rare elements such as neodymium, praseodymium, gadolinium and dysprosium, not to mention quantities of gold, silver and other high value elements.

“All of these need to be mined by extracting high value ores, which is putting a significant strain on the planet.”

To conduct the experiment, the researchers took the blended phone and mixed it at almost 500°C with a powerful oxidiser, sodium peroxide.

They were then able to do a detailed analysis of the resulting solution in acid to determine its precise chemical contents.

The results showed the phone used in the tests contained 33g of iron, 13g of silicon and 7g of chromium, as well as smaller quantities of other common substances.

But it also included a number of critical elements including 900mg of tungsten and 70mg of cobalt and molybdenum, as well as 160mg of neodymium and 30mg of praseodymium. And each phone contained 90mg of silver and 36mg of gold.

The researchers said that means that concentration-wise, a phone has 100 times more gold – or 10 times more tungsten – than a mineral resource geologists would call ‘high-grade’.

Dr Wilkins said: “Mining can be part of the solution to the world’s problems.

“But we are now in a climate where people are becoming more socially responsible and interested in the contents of what they are purchasing.

“Partly on the back of this, several of the major mobile phone companies have committed to upping their recycling rates.

“It is a positive sign that the throwaway society we have lived in for decades is changing, and we hope this project will encourage more people to ask questions about their own behaviour.”

Antony Turner, chief executive of Real World Visuals, added: “I now view the phone in my pocket not just as a window on the world but also as a store of precious metals.

“I wonder where these metals have come from and whether they will be re-used after the phone is discarded.”