Cybercriminals claim they have video footage of their would-be victims watching pornography taken from their targets' webcams.

by Guest Contributor
in News, Tech and Auto, Technology 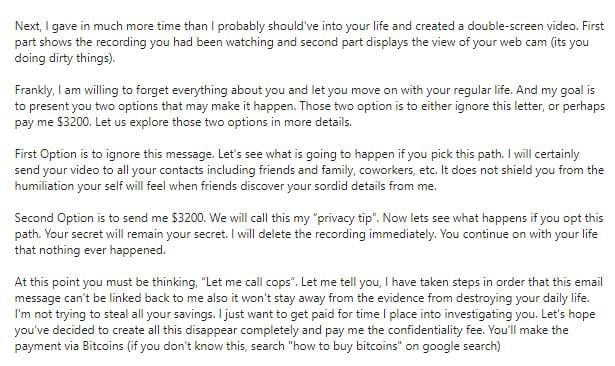 The cyber criminals who have hacked millions of personal accounts from a string of “popular websites” are sending out mass e-mails in a “sextortion” internet scam.

The crooks claim they have video footage of their would-be victims watching pornography taken from their targets’ webcams.

They then demand thousands of pounds in Bitcoins in exchange for not sending the embarrassing footage to their families and friends.

Detectives said more than 100 “sextortion” claims have been reported to Action Fraud while the emails, which contain the recipient’s password in the subject line to back up the blackmail bid, have now been reported across Kent.

Detective Constable Mark Agnew of Kent Police’s Cybercrime Unit said: “The people responsible for these scams email large numbers of people at a time, including those who do not visit pornographic websites.

“It is therefore doubtful they have the evidence they claim they have.

“It is however understandable that some people will be concerned about receiving this type of email, but paying only highlights that you are vulnerable and can be targeted again.

“The internet is an incredible resource but comes with its own set of unique dangers that we all need to be aware of.

“By following just a few simple measures we can protect ourselves from those who misuse technology in order to benefit from the misery of others.”

A spokesman for Kent Police said: “The usernames and passwords used in the scam have been obtained from historic data breaches of popular websites, which are then inserted into an email template and sent to large number of individuals in the hope that some will respond to the demands made.

“Such breaches often include the details of millions of people who are often unaware their details have even been compromised.

“Cybercrime detectives are advising people not to be tricked into paying hackers who claim to have evidence of them watching online pornography.

“Nationally more than 100 reports of so-called ‘sextortion’ scams have been made to Action Fraud and since 12 July Kent Police has received reports from across the county, including the Medway Towns, Ashford, Canterbury and Thanet.

“Victims have received an email in which their own password is included in the subject line.

“They are then informed that the hacker has video evidence of them visiting a pornographic website, and that the footage will be sent to their friends and family unless they pay them thousands of pounds’ worth of online currency.”

Kent Police urged anyone who receives the email not to reply, change all their passwords for online accounts to strong, separate passwords with extra security where possible and update their anti-virus software.

They should also cover their webcams when not in use and check if their accounts had been hacked on website haveibeenpwned.com and report the email to Action Fraud.