With its sleek, stylish design and well thought out interior, how does the Cupra Formentor e-hybrid work in the real world? 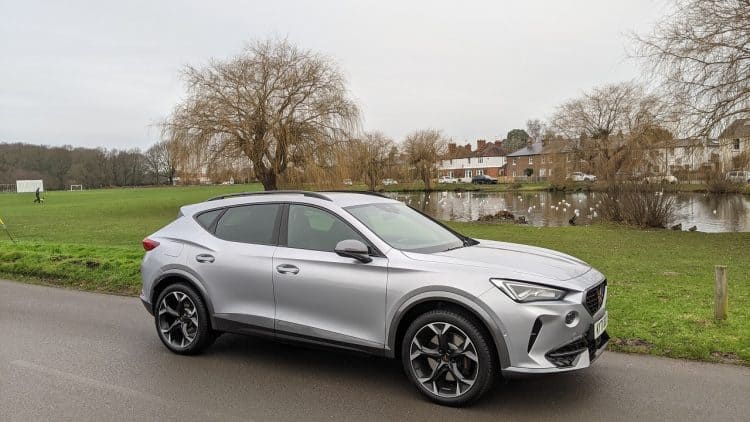 As we’ve mentioned before, on multiple occasions, aesthetics matter. Cars often represent an extension of ourselves. Looking good is important. In a crowded market of cars that increasingly only appeal to prospective owners based on availability and monthly costs, having a model that stands out is no bad thing. The Cupra Formentor e-hybrid certainly stands out.

It’s unquestionably a great looking car. For a crossover, or just in general? I’ll leave that to you to decide. Nailing the crossover brief is difficult; they’re necessarily compromised by the need for bulk. Making them attractive is a task that has failed the vast majority of manufacturers. More than putting lipstick on a hippo, the Formentor is all dramatic curves and edges, with well designed 19” wheels on the VZ1 model tested.

Inside the Cupra Formentor is a nice place to be. It feels cavernous, with its low-slung sporty bucket seats leaving enough headroom for a giraffe. Rear space, too, is copious. Then there’s a 345-litre boot. I can see the appeal as your next family car.

What’s the Cupra Formentor e-hybrid like to live with?

Perfectly amenable. The combination of good looks and practicality make it an attractive proposition. For the day-to-day general use of getting the kids to school, heading to the shops and commuting, it’s great.

The battery range is around 25 miles in the real world, which is enough for most journeys. Assuming you can keep the battery topped up, of course. The battery works well in tandem with the engine, too. Often hybrids can be a bit confused about their power delivery. The Cupra Formentor e-hybrid handles the transition well. A heavier right foot prompts the engine into life. Working in tandem in everyday driving, battery and engine will see you achieve well over 40mpg, probably into the 50s.

You’ll be comfortable on every journey, too. Nice touches such as prompting the car to ‘warm my feet’ make it accessible and it’s a nice place to be at night. The wraparound cabin lighting is adjustable to your preference and the section near the wing mirrors lights up as a blind spot warning. Even the puddle lights are cool, illuminating the ground with Cupra’s distinctive badge. It’s all very well designed and thought out.

Over speed bumps and potholes, the Cupra Formentor e-hybrid is relatively unflustered, as you’d expect of a car like this. It feels incredibly light, too. The steering, for which there are three modes, is adaptable to your preferences and the adaptive dampers work well. In comfort, this is an incredibly relaxed car. It is at its best being handled in a more relaxed manner.

Which brings us onto the sportiness. Cupra, as a brand, is the sporty offshoot of Seat. Would it be unreasonable to expect dynamism, thrills and spills from the Cupra Formentor e-hybrid?

Unfortunately, this is where things start to fall down. I reviewed the Cupra Formentor e-hybrid in January. The week in which I had it saw a highest temperature of 7°C. The front-wheel drive system in the car really struggled to cope with this. It was constantly scrabbling for traction off the line.

My wife said the same, describing it as “almost undrivable” in a multi-storey car park because the front wheels just kept spinning. She’s not an aggressive driver.

When you do want to get away quickly, you end up going nowhere. Pulling away from the lights becomes an exercise in caution. The 245hp simply overwhelms the car and flooring it is counter-productive to progress.

This struggle for traction continues once you’ve got the car moving. Floor it at anything up to 30mph and the front wheels spin up again. Then, entering a corner carrying a bit of speed reveals a huge dollop of understeer. That, married to the lack of feedback from chassis and steering, doesn’t inspire any confidence in the dynamic capability of the Cupra Formentor e-hybrid.

Which is a shame, because it looks like it should offer more than it does. You certainly won’t be longing for you favourite B-road on the way home from work.

It’s hard to escape the suspicion that the e-hybrid has been built out of commercial necessity rather than love by the engineers at Cupra. When it comes to enjoying the driving experience, the Seat Leon e-hybrid is a much better option. It’s far more playful and much more fun to drive.

Cupra clearly set its sights on the Cupra Formentor 310. This has 310hp and four-wheel drive, which will instantly improve the offering. Which brings us to the price. The model tested here is £39,700. The 4Drive 310 version is only £2,000 more. As ever, the cost of the battery is unjustifiable if paying from your own pocket. As a company car, however, the 11% BIK rate makes it attractive. I think.

This feels like a car that Cupra built because it had to, rather than because it wanted to. It benefits from the same appealing aesthetics, nice internal touches and overarching practicality. If used solely for domestic and commuting purposes, it works brilliantly.

If you’re not fussed about threading it along a B-road, then that’s all that matters. For many, it will undoubtedly hit the mark. If you’re hoping for a side serving of entertainment, you will be disappointed.

The lack of traction puts paid to any dynamic credentials and you’ll also be spending a fortune on new front tyres from every time you try and pull away. Now, this could be the fault of tyres. The model tested was fitted with Bridgestone Turanzas and it might be that they’re just an awkward fit for the car. We found a similar issue with the Pirellis fitted to the Alfa Romeo Guilia Quadrifolgio in comparable atmospheric conditions. You’re unlikely, however, to be as considerate about the need for appropriate winter tyres on your family crossover as you are in something like the Alfa.

There’s a lot to like here. For the everyday, it’s great. Driving to work was a comfortable breeze. It’s incredibly practical, too. When seeking out a side serving of entertainment, however, the Cupra Formentor e-hybrid is found wanting. It all depends on what you’re looking for…