You’ll know all you need to about the BMW M3 after five minutes behind the wheel. You’ll just want a wee bit longer 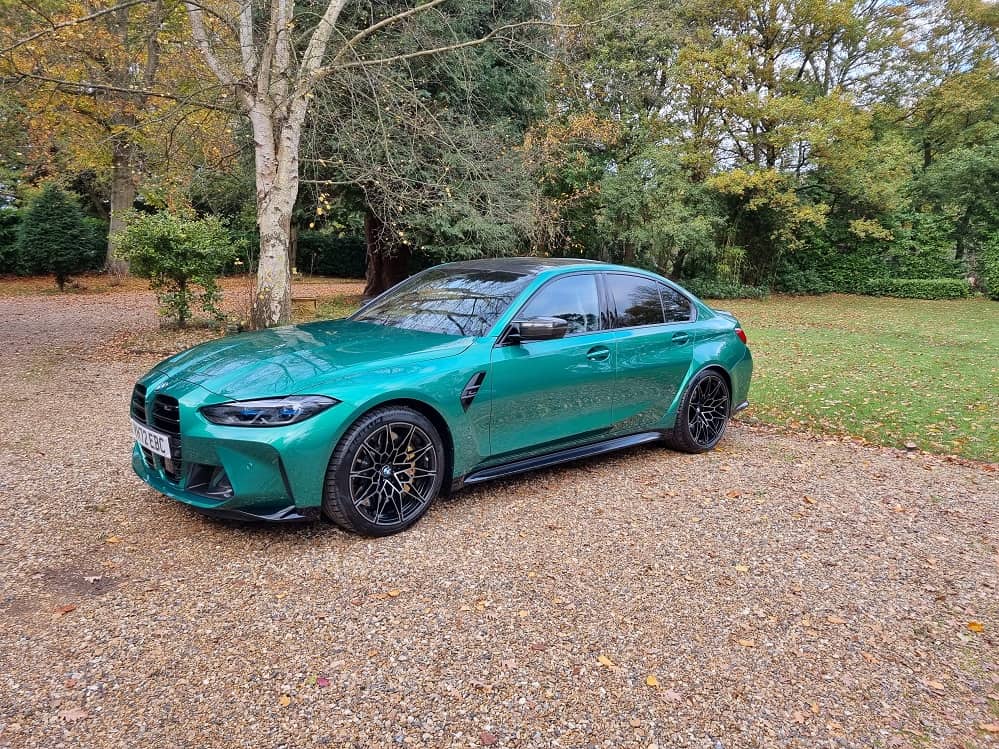 Sometimes, you just know something straightaway. A crossword answer might just jump out at you. Love at first sight. The realisation that you’ve just done something very silly. On other occasions, things take their time to reveal themselves to you. The meaning of life. What that little pocket in your jeans is for. A Test match. I mention this because the BMW M3 sits firmly in the former camp. It’s unusual in this respect. In some cars I’ve had to drive 400 miles before I’ve really grasped the point of them, if I’ve even grasped it at all. There’s often a drive, or a moment, where everything falls into place. Not so with the BMW M3. I’d barely reached the end of my road before I absolutely understood the pros and cons of this car.

First of all, it has presence in spades. The Isle of Man green paintwork accentuates its aggressive curves and edges. It bristles with intent without doing anything. The kidney grille caused quite some consternation when the BMW M3 was launched a year ago, but emotions seem to have mellowed. Like a recent Arctic Monkeys album, it has been worth persevering with because the reward is something that stands out. Okay, I think it’s good looking. There, I’ve said it. I like big grilles and I cannot lie. As an aside on this point, speaking to the head of design at another manufacturer, he said that if he could’ve designed any car on the road right now, it would be the BMW M4, brother of the M3, which is also adorned with the controversial grille.

Practicality in the BMW M3

Anyway, beauty is in the eye of the beholder but the BMW M3 is certainly striking. This continues when you open the door. The model tested came fitted with the majority of BMW’s options list, including the M Carbon Pack, which includes the carbon bucket seats. Ingress and egress are slightly challenging, but once inside you’re immediately rewarded with a fabulous driving position. The sweeping touchscreen, chunky leather steering wheel and perfect positioning set you up for what this car is: a driver’s car.

Yet it also retains the family-friendly ethos of the 3 Series. There’s plenty of space in the back and ISOFIX so you can lug the kids around. There’s plenty of storage space in the cabin to supplement the 480-litre boot. Tick the box for the Comfort Pack and you get an electrically operated boot lid along with a heated steering wheel and comfort access. The BMW M3 carries everyday appeal.

One point to note, however, around the carbon bucket seats is that they are polished carbon fibre at the rear. It rained pretty much non-stop for the duration of my review of the BMW M3 and my eldest son thought it was hilarious to rub his shoes on the back of the seat, inducing an horrendous squeaking noise. I guess I could’ve cut his feet off. Or taken his shoes off. Probably the latter.

The Visibility Pack brings in BMW’s laser lights, so driving at night is no problem. Fit the Technology Pack and you also won’t have to worry about scuffing the M double-spoke bicolour black alloys (19” at the front, 20” at the rear) thanks to park assist. This is a super-saloon that hasn’t forgotten that it’s a family car.

The major downside you’ll encounter with the BMW M3 is other people using the road. They’re a pain in the backside. The types who do 40mph when it’s single lane, 60mph on anything else. You’ll really notice those people when you’re driving your BMW M3. If it’s not them, then others seemed to get quite giddy at seeing the M3 and want to race you.

This poses less of a problem. The twin-turbo charged inline six-cylinder engine produces 503bhp and 650Nm of torque. 0-60mph in the rear wheel drive BMW M3 Competition, as tested, is ticked off in 3.8secs. Go for the Xdrive model, which offers a four-wheel drive setup, and that comes down to 3.5secs. When it’s dry (which it mostly wasn’t for me), the model tested came with the track tyres, Michelin Pilot Sport 4Ss, to accompany the wheels. I’ve no doubt that 0-60 is ticked off quicker than the on-paper time offered by BMW. It absolutely flies.

Then it grips. Boy does it grip. It’s even manageable on more slippery surfaces. So, unless the person wishing to push you is driving a super car, they will soon disappear from view on any type of road. The other thing is that the BMW M3 barely feels like it’s breaking a sweat when doing this. You can really lean on it, in every respect, and it just gets on with the job. Whilst raucous, it never feels stressed.

Another negative, for the sake of balance. When you place the driver’s seat at its lowest, visibility out of the right-hand side of the car is limited by the size of the A pillar and the wing mirrors. They’re rather large. That’s it for negatives in the driving experience, though; other people on the road and a chunky A pillar.

Living with the BMW M3

Most of the time when driving, you’re not haring down your favourite B road. You’re stuck on a dual carriageway early in the morning or early in the evening questioning what the point in anything is. Thankfully, the BMW M3 beats these blues. It’s comfortable and has a good Harmon/Kardon stereo, plus wireless phone connection. It doesn’t get agitated in traffic either, again simply getting on with the job at hand. The carbon bucket seats are also surprisingly comfortable. Long journeys aren’t back-ache-inducing as you may presume at the outset.

On a long motorway cruise you’ll get 30+mpg out of the BMW M3. I covered 250 miles and achieved 20.5mpg. Now, the BMW M3 draws you in like a flame does a moth. You could sit there and achieve decent economy figures, sure, but you’re driving a BMW M3. It reminds you of this when you unlock it, the M3 logo in the headrests being prominently backlit. It demands to be driven. Who wants to sit on motorways when you can head into the countryside and enjoy some B roads?

Whilst the BMW M3 excels in every scenario you can throw at it, it feels at its happiest where you’ll feel at yours in it; out on the open road, darting from corner to corner, enjoying the precision of the steering and the communication from the chassis.

The back end is always willing to step out on you, but it never gets unruly and you never feel out of control. It’s a livewire of a car that has the wonderful of knack of making you feel alive. Now, track tyres in the wet aren’t ideal, but even then it never lost its composure. If you’re feeling particularly fruity, there’s even a drift analyser so you can rate your skids.

Everything dials up to 11 when you want it to in the BMW M3 and it just takes it in its stride. The M Pro Pack brings in carbon ceramic brakes which you’ll need for the track days you’ll definitely be doing. It also raises the top speed to 180mph, just in case 155mph is too slow. I’ll take BMW’s word that’s the case.

So good is the BMW M3 that is brings to mind the Alfa Romeo Giulia Quadrifoglio. Everyone loves the Alfa, because it’s absolutely superb. Perhaps the highest compliment that I can pay the BMW M3 is that it’s at least – at least – on a par with the four leaf Giulia. The German marque perhaps lacks a little of the romanticism of its Italian counterpart but makes up for this in usability and functionality. Deciding between the two? Well, that would be the greatest hardest decision you’d ever have make, akin to having Margot Robbie/Brad Pitt and Jennifer Lawrence/Ryan Gosling (delete according to personal preference) vying for your affections.

I could have driven to the end of my road, turned around and come back to write this review. The BMW M3 reveals itself to you instantly. You’ll know all you need to know after five minutes. But those five minutes won’t be enough. I didn’t turn around. There’s something here that keeps you coming back for more. From that first drive, I was already sad that I would only have a week with it.

That’s what great cars do, they draw you in and keep you coming back for more. The BMW M3 has to be a brilliant car, given what’s gone before it in M Sport history. The G80 BMW M3 Competition doesn’t disappoint.

Watch: Mourners vent frustration after being turned away from Queen’s lying in state