This is the jaw-dropping moment an out-of-control van careers down a road towards traffic, in Luton, whilst on fire after its brakes fail 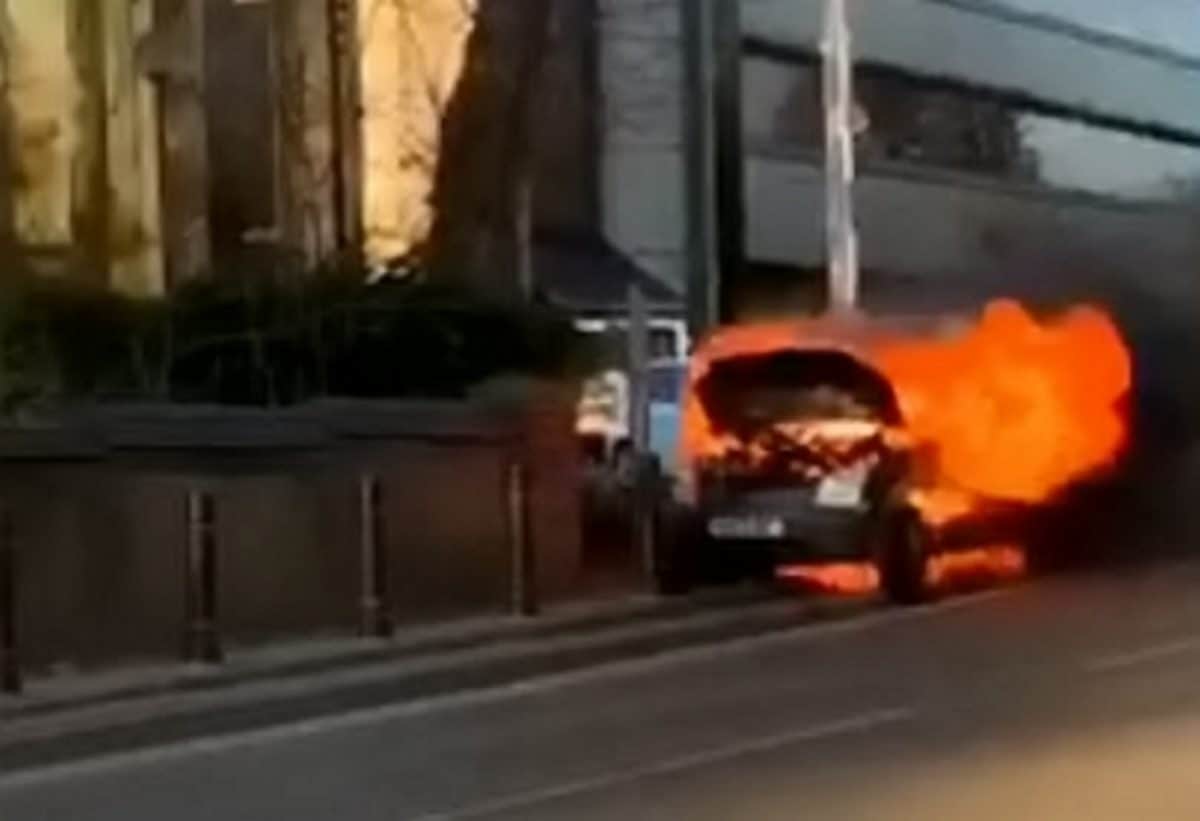 This is the scary moment a blazing out-of-control van rolled down a hill into the path of oncoming cars — while in on fire.

Horrified bystanders watched on as a van ploughed down a steep road like a fireball after the brakes apparently failed.

But to the horror of onlookers, the van – now roaring with flames – began to roll down Park Lane, in Luton at speed, at around 4pm, on Monday (February 25),

Footage from the scene shows the van was heading towards queuing cars, caught up in delays caused by the fire.

In the video, drivers try to escape the van as it careers down the road, and it narrowly avoids hitting cars in its path before plouging straight into roadside bollards.

It eventually came to rest after smashing into the garden wall of a home, in Osborne Road, Luton.

An 18-year-old college student from Luton, who saw the fire, said: “I was just on my way back from college and I was walking past a school right next to ours when I saw smoke coming from this van that was parked next to the pavement.

“When I got closer I saw that there was fire coming out of it as well.

“Nobody was in the van, but it must have been sat there on fire for about five or ten minutes.”

The fire service set up a safety zone around the vehicle before extinguishing the flames once the van came to a standstill.

It is thought the van’s brakes failed after it caught fire, causing the vehicle to rolls down the hill on a path of destruction.

The college student added: “As the emergency services got there I think the brakes must have failed, because the van started rolling down the hill.

“I think the engine overheated and the brakes failed.

“It was really bad, lots of cars had to start reversing out of the way and some had to move over onto the footpath.

“It had no control, it was going quite fast down the hill. There were ashes in the road from the van.

“It was terrifying. I had to hide in a driveway but as it rolled past me I could feel the heat coming off it.

“Nobody was hurt. The owner of the vehicle was the one who came out and made everyone aware to keep out the way.

“Then the van crashed into this big pole and stopped.”

A Bedfordshire Fire and Rescue Service spokesperson, said: “The incident was originally called in to us as Gypsy Lane, Luton but I believe the vehicle did end up colliding with the wall of a property in Osborne Road, Luton.