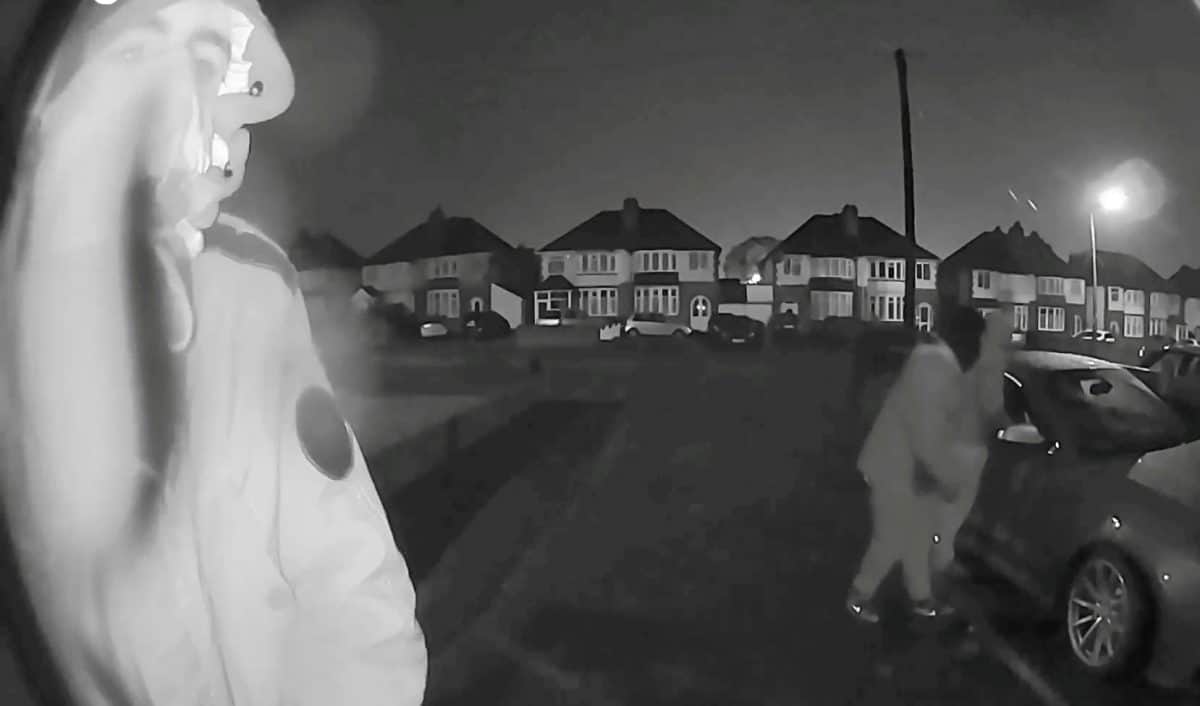 This is the shocking moment brazen car thieves were caught on camera laughing as they stole an Audi from a family home before beeping the horn as they drove away.

The cheeky crooks were captured on a doorbell camera stealing the £60,000 motor in under a minute from a driveway in the keyless car theft last Tuesday (15/10).

The group of four can be seen approaching the blue Audi A5 which was parked on the driveway on Throne Road, in Rowley Regis, West Mids.

One of the suspects approaches the house with what appears to be crowbar and an aerial relay while his three pals break into the car.

Despite the car alarm then proceeding to go off, the gang make away with the luxury motor, cheering at their exploits and loudly revving the engine.

Homeowner Jason Oakes, 48, watched the theft unfold live on his phone as he was away working in Wales – while his girlfriend barricaded herself in a bedroom.

He said he couldn’t believe the cheek of the thieves as they laughed and beeped the horn and is now fearful they could return to his home.

Jason, an electrical engineer, said: “I was actually working away that night in Wales and my doorbell device went off while I was away.

“My girlfriend was at home. I looked at the device and I can see someone just putting their thumb over the doorbell and trying to get into the car.

“I tried to phone my girlfriend but my phone went flat. I was working with my son, Nathan, and he phoned the Welsh Police.

“I couldn’t get in touch with my girlfriend at first, we informed West Midlands Police and then I was communicating with them while I was watching them take the car off the drive.”

Jason says he now struggles to sleep at night while his girlfriend, Susan Moore, 38, no longer wants to live in the house.

He added: “It was proper terrifying because on the video, you see them waving the crowbar at the bedroom window.

“Even though they were there to take the car and the girlfriend didn’t get hurt, me being in Wales and looking at a phone screen, I felt helpless.

“I thought they were going to break into the house and hurt my girlfriend. I thought it was going to be a lot worse than it was.

“Everybody is saying, ‘at least they only took the car, you’re all right, don’t worry about it, your insured,’ but it just keeps playing on my mind all the time.

“I’m constantly thinking about it and I’m trying to invest in more security for the house just in case they come back.

“They didn’t seem to care one bit. They were so brazen. I couldn’t believe it when I heard them laughing and beeping the horn.”

West Midlands Police have launched an investigation but are yet to make any arrests in connection with the theft.

A force spokesman said: “Police are investigating after a blue Audi, was stolen from a driveway in Throne Road, Rowley Regis on Tuesday, October 15, at about 12.15am.

“It is believed that four offenders arrived in a white Volkswagen vehicle and smashed the driver’s window of the Audi before leaving in both cars.

“Officers are looking at CCTV in the area and enquiries continue.”

The video was posted online by LockedDown Vehicle Security on their Facebook page.

“Nobody can have anything nice these days makes me angry hopefully it is found and returned to the family it was taken from.”

Another user, Samuel Hood, added: “It really shouldn’t be that easy…”

Anyone with information is urged to call West Midlands Police on 101, quoting incident reference number 25 of October 15.