The 40ft-long large good vehicle (LGV) wreaked havoc while attempting to navigate its way through the village’s narrow streets at around 11.30am today 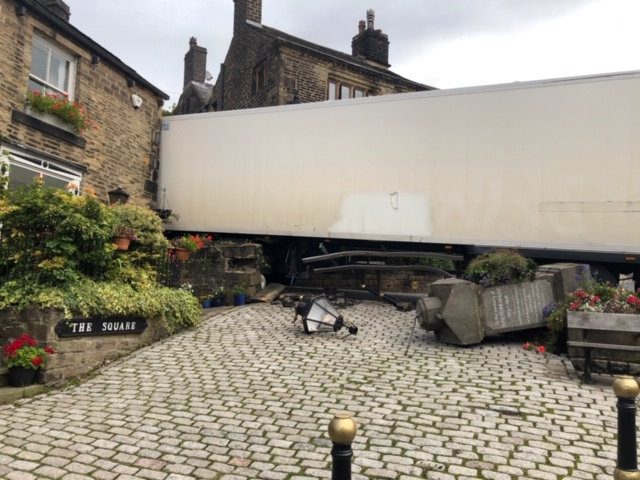 These dramatic photos show a huge lorry which struck a cottage and got stuck while trying to pass through a pretty village square.

The 40ft-long large good vehicle (LGV) wreaked havoc while attempting to navigate its way through the village’s narrow streets at around 11.30am today.

It toppled a 17th-century memorial and smashed into the side of a property before becoming wedged in.

Emergency services remain at the scene and one person – thought to be the driver – is “conscious and breathing,” police said.

At the time of the crash, it’s understood that the lorry was heading up from The Square in Dobcross near Saddleworth, Greater Mancs.

Villager Ken Bennett, 78, a father-of-four, said: “The square itself was the scene of drama in the film.

“The lorry is about 40ft long and it’s thought that it came up into the village, attempted to turn left into a narrow road and got stuck.

“It’s knocked over an old and historic memorial and crashed into a building.

“It’s jammed at the moment but I don’t think anyone has been hurt. The police are on the scene.”

A tweet from GMP Saddleworth said: “We are just getting reports of a LGV colliding with a property in Dobcross.

“Greater Manchester Fire and Rescue Service are on their way as are the council’s building inspectors.

“Can we ask that you avoid the village and find an alternative route for the time being.”

The film is set during the Second World War in Northern England and features no combat scenes.

It depicts the relationships between American soldiers stationed in semi-rural England and the local population during the build-up to Operation Overlord in 1944.

In particular, three romances between US service personnel and local women are shown, in order to explore the effects of the cultural differences between the brash GIs or “Yanks” and the more reserved British population.