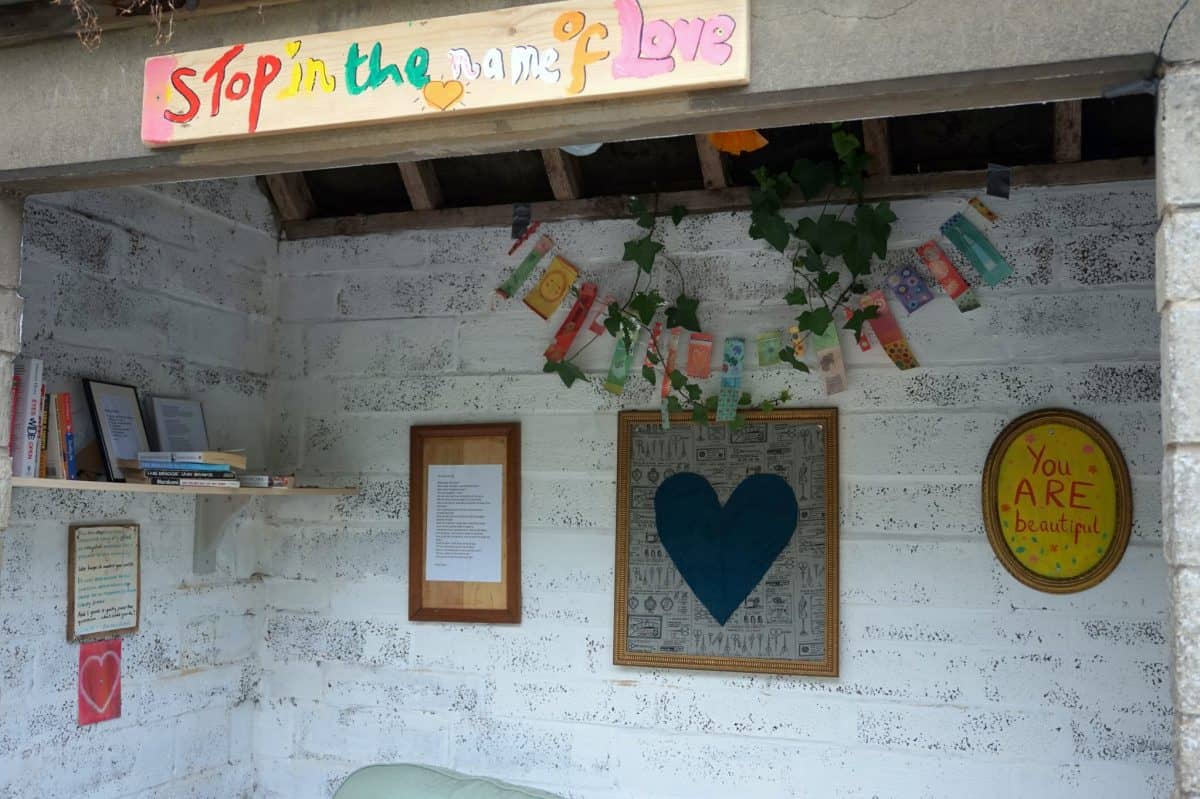 A mystery ‘vandal’ has transformed a BUS STOP into a cosy living space – complete with armchair, bookshelf, and a banner that reads “Stop in the name of love”.

The previously “boring” village bus shelter has now been changed into a space that commuters are calling “the best bus stop” and “a cosy cabin”.

It has been decked out with a bookshelf, a green armchair, and placards hanging on the back wall containing framed paper hearts and the words “You are beautiful”.

A sign under the bookshelf reads: “This bus stop has been decorated using only gifted or recycled materials as a present to the community. We hope it makes you smile.

“It was one answer to the question about what we could do in response to these crazy times. And I guess it gently poses the question… what could you do?”

The notice is dated June 2019, and signed off from ‘Bus Stop Friends’.

The homely touches are believed to have appeared at the bus stop in Thrupp, near Stroud, Glos., in July.

Mary Fisk, who runs weekly vintage market stall Vintage Mary in Stroud, spotted the bus stop on August 3, and said it was “the strangest thing” but “certainly brightened up my day”.

“Innocently you’re walking along the road into Stroud without a care in the world, only to find that the local bus stop has been totally transformed with chairs, books, poetry & pictures.”

Mary added that she thought people had found the shelter “really boring” to look at and stand in.

She said: “They just wanted to make it more lovely for people and bring a smile to everyone’s face as they drive past.

“But they’re not going to come forward because it is legally an act of vandalism, even if it’s very nice vandalism.”

And Mary is not the only one who has been enjoying the newly-renovated bus stop.

On Twitter, Sacha Coward shared a photo of the bus stop, commenting: “Someone turned the bus stop near my gym in Stroud into a cosy cabin.”

And Shani Wills posted: “Whoever you are, you are lovely.”

Meanwhile, Alex Love simply described it as “the best bus stop in Stroud”.

Brimscombe and Thrupp Parish Council, which owns the bus shelter, said: “We still don’t know who did it and still haven’t decided what to do.”