“Our partnership with van artist Ruddy Muddy is a visual tribute to the craftsmanship, talent and passion that goes into creating a masterpiece - of course, it had to be a Van Gogh." 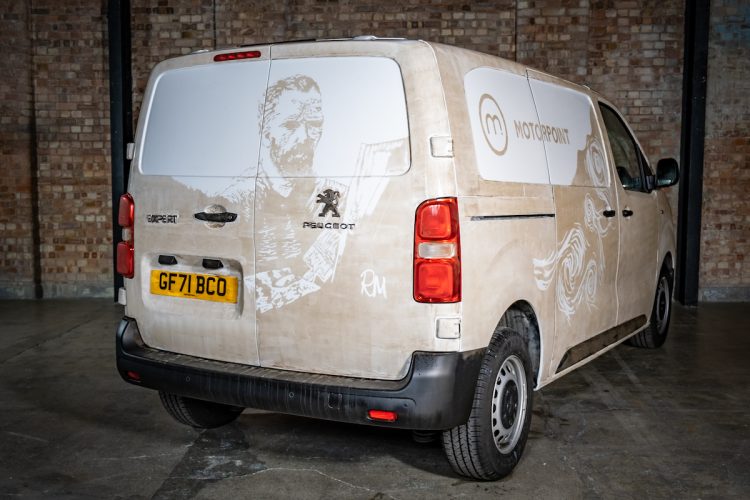 The artwork was commissioned by the nearly new car and van retailer Motorpoint as a salute to tradespeople and commercial vehicle drivers.

Mark Carpenter, CEO at Motorpoint, said: “Our partnership with van artist Ruddy Muddy is a visual tribute to the craftsmanship, talent and passion that goes into creating a masterpiece – of course, it had to be a Van Gogh.

“We also wanted to shine a light on tradespeople; those who helped us achieve all our renovation goals during the pandemic and kept us safe with good workmanship and advice when things go wrong with our homes.”

Along with the distinctive artwork, the brand commissioned a study of 2,000 UK adults who have completed work on their homes in the last 10 years, on their views about working with tradespeople.

Over a quarter (26 per cent) said they specifically look for a well-presented van when employing a tradesperson, and this figure was even higher for those in Wales (44 per cent) and London (32 per cent).

Just under one in three households (30 per cent) said a clean van indicates a trustworthy tradesperson, while 38 per cent believe it shows promise of a tidy approach to work.

Following the surge in home renovations of recent times, a huge 83 per cent agree that a dependable trade is a valuable contact, and 58 per cent say they value good tradespeople more since the pandemic.

Clean and tidy workers are especially well received, as eight in 10 homeowners said tidiness was very important when having work done to their homes.

When weighing up ‘getting someone in’ versus DIY, one in three people prefer a tradesperson to carry out work or repairs on their home rather than attempting it themselves, to ensure the work is completed to a high standard.

In addition, nearly half of respondents to the OnePoll survey believe using a qualified tradesperson minimises future problems, while 37 per cent believe it saves time over DIY.

Mark Carpenter added: “Every trade needs a trusty sidekick, often in the form of a van for transporting equipment and travelling to clients.

“These are an integral part of motoring culture and we wanted to celebrate them too and have a bit of fun along the way.

“Our research shows that a clean and well-maintained van sends a positive message to a customer about dependability.

“We know how busy tradespeople are in current times and that keeping on top of vehicle maintenance is another job to do, but there are clear business benefits alongside the essential safety obligations.”

When asked about other tradesperson traits, reliability was most highly ranked, with nearly six in 10 rating it important (59 per cent), followed by good value for money (50 per cent), and efficiency (46 per cent).

And when it comes to sourcing a person to decorate or repair their home, almost two thirds of people polled prefer to use word of mouth, followed by searching up on the internet (43 per cent), and social media (23 per cent).

Interestingly, nearly four in 10 have previously been put off using a tradesperson because they simply don’t know where to find a good one (37 per cent) but almost one in five (17 per cent) refer to adverts on vans when sourcing a trade.