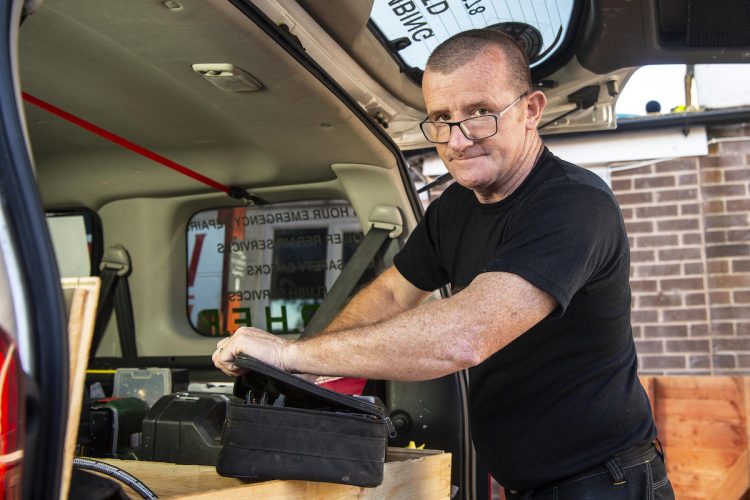 A plumber who founded a social enterprise which has helped more than TWO MILLION of the UK’s most vulnerable people has been hailed a modern day hero.

Father-of-six James Anderson, 54, runs Depher – the community interest company which provides heavily subsidised services for the those who are struggling with the rising cost of living.

From paying people’s bills they cannot afford, to offering emergency plumbing and heating services, delivering food parcels and covering funeral payments, there is not a lot Depher does not cover for those that need it most.

The Burnley-based dad said: “The amount of poverty we have seen over the past year is horrific – sometimes you have to pinch yourself to try and say it’s a film and everything is going to be fine.

“But it’s the reality, and that is what is terrifying.

“So what we try to do is help people realise there is somebody out there who will help them”.

James – also known as “Britain’s kindest plumber” – has been the man behind the life-changing organisation for six years.

In that time, his team have helped more than 52,000 families – around two million people across the country.

One of Depher’s successful case studies went viral on Twitter just a few days ago – detailing an elderly woman who could not pay her shopping bill because of an extortionate bill from an energy company.

“She walked away crying, she was bloody starving. @RishiSunak WOULD YOU LET YOUR MOTHER STARVE….”.

James said: “This woman was crying her eyes out, not just because she was upset at the situation, but she’s been through enough in her life.

“To be in a position where you are scared to look at your own bank account or go shopping.

“What have we become as a country? We should be disgusted in ourselves”.

Depher covered the elderly lady’s shopping costs, who wished to remain anonymous – and got the energy company to issue her a full refund.

Homes in Great Britain were hit by gas and electricity increases of 54% at the beginning of April.

This is the biggest rise in the cost of energy bills in recorded history, and they are likely to rise substantially again in October – leaving thousands more to have to choose between heating and eating.

“I’ve always said that it’s the children who suffer the most in these circumstances and they’re our futures, the next generation who take over where we’ve left off and what kind of future do we want to leave for them?

“A minimum of 400,000 children will be pushed into poverty with the Universal Credit £20-a-week being cut and prices are going up again in October.

“Families that struggle to pay the bills will see knock on effects with their mental health issues and the NHS, which is already overstretched, will see an effect on their resources with people struggling”.

Before James began his humanitarian work, the grandfather-of-four has been working in the plumbing and heating industry since 1998.

When one day, he went on a job to a gentleman’s house in Burnley, Lanc., who had asked James to take a look at his boiler.

As it turns out, the company had scammed the vulnerable individual for £5,500.

James said: “This company had tried to scam this guy for thousands of pounds he didn’t have, for work that he certainly did not need.

“This guy was elderly and bed-bound – he was in an extremely vulnerable position.

“We stepped in and dealt with the company and gave the guy a £1,000 free boiler.

“We very easily could have shut the company down”.

That was the moment James was inspired to take action – and use his position to help the elderly, vulnerable and disabled members of the community facing unjust hardships such as these.

Something needs to be done

“I just remember thinking something needs to be done about this”, admitted James.

“This happens to so many people – and I thought if I could help just one at a time, I would be doing some good”.

James then set up Depher in 2017 alongside Northern Plumbers and Heating – but faced his own struggles along the way.

“I have a family to support but was also trying to help others and had four lads’ wages to pay”.

The father was so invested in the cause that he did not take a wage for two and a half years.

Now, the Burnley-based social enterprise has 13 employees who work all over the country.

James says the organisation “have their ways” to get to those in need and can aid even more people after expanding their services during the Covid-19 pandemic.

“If someone needs food or any emergency service, we get there.

“We readjusted our services during Covid to help thousands of families and emergency services with Plumbing, Boilers, funeral services, food, gas, electricity and PPE”.

Margaret, a 90-year-old pensioner, is just one of the people James has been able to help through Depher.

After James installed a new boiler part for Margaret for £34 – instead of the £180 the trader tried to charge her – she said: “James saved my life.

“His kindness has saved me, in many ways reminding me of the old days”.

Depher’s crowdfunder has now received a staggering £63,610 out of their £100,000 goal and Andrew says their work so far “is only the start”.

Related: Cost of living crisis: People given map showing where they can find and pick free wild food