Is the McLaren 720S spider the best supercar in the world? We lived with one for a week to find out. The answer may just be... 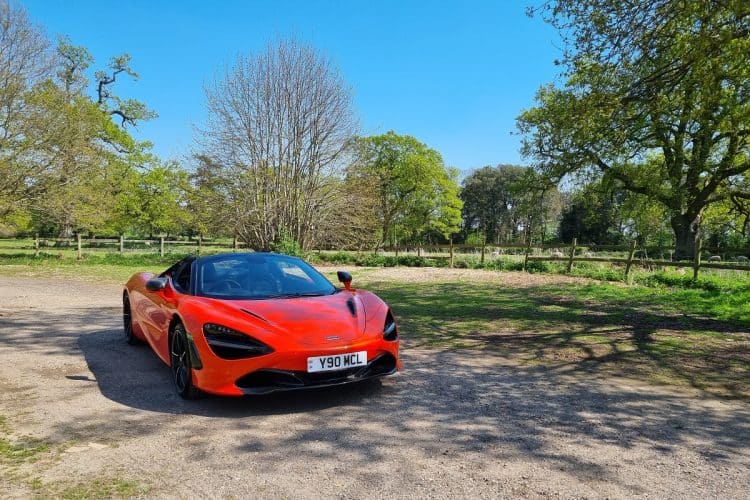 Sometimes it can take a while for things to click. You may, for example, need to convince yourself that you like kale. It’s good for you. Does it really taste that bad? Hang on in there, give it time. Similarly, giving up sugar in your morning coffee is a slow process, sweetness ceding to bitterness in the name of the greater good. Sometimes, however, everything just makes sense straightaway. A decent bottle of wine or a slice of fine cheese. The McLaren 720S spider.

From the first drive, you are aware that this is a special car. Easy to traverse through town, then easy to plot a course down your favourite B-road at whatever speed you choose. A car like the McLaren 720S spider should be outright intimidating. A 4.0-lite twin-turbo V8 produces 720PS (hence the name) and 770Nm of torque. 0-60mph takes just 2.8secs. 0-124mph takes 7.9secs. The quarter mile just 10.4secs. It is unrelentingly fast.

It’s also incredibly accessible. Sure, it’s not the final word in comfort or practicality, but supercars aren’t supposed to be. There are one or two build quality issues as well. Nothing in life is perfect, even at £297,000. But do they detract from the overall package? It depends if you’ve got OCD or not. Ever so slightly misaligned doors, sprigs of material sprouting upwards from behind the headrests when the roof is down and one exhaust tailpipe being slightly longer than the other. Curiosities, certainly. Deal breakers? Not for me, at least.

There’s no beating around the bush in answering this question – it’s absolutely superb. On an open road, with the roof off, it suspends reality. The acceleration is scarcely believable. The McLaren 720S spider just does not let up. It’s something we noted when reviewing it on track earlier in the year, but the speedo just doesn’t stop climbing.

Yet it’s also engaging to drive at slower speeds. Given that you’re never more than 3secs away from reaching a licence-losing speed in the McLaren 720S spider, that’s just as well. McLaren still deploys a hydraulic steering rack and it makes the set up sensational. No one does it better.

Marry the steering to a brilliant driving position, a commanding view of the road ahead and a lightweight feel; everything just clicks. The front wheel arches make positioning the car easy and you can apex hunt on any road. Plotting a path along a country road is an experience you’ll repeatedly chase.

It being rear wheel drive, there is always the prospect of oversteer, but the McLaren 720S spider provides so much traction that this isn’t really an issue. You can drive purposefully with confidence. Even when it does get a bit twitchy, correction is easy. Which is just as well. There is a variable drift mode available, but without a race track to call upon, it wasn’t an option I ever deployed. I’m unlikely to get called up for any drifting competitions, either. And who does that on the open road anyway?

Driven quickly or more sedately, the McLaren 720S spider delivers. It’s not so intimidating that you are put off pushing it. Cliché alert – it’s like an over-sized go-kart. Waspish changes of direction and savage acceleration keep you coming back for more.

It’s enjoyable across its three driving modes. Press the ‘active’ button on the centre console and you can have your fill of comfort, sport and track across the powertrain and gearbox. Deactivate active and everything reverts to comfort.

In comfort, it runs through the gears quickly and quietly. You’ll be in 6th gear pootling along at 30mph. Even in sport it will run up the ratios quickly, which is where the manual mode comes into play.

To give it its dues, the McLaren 720S spider is incredibly canny at interpreting your intentions. A gentle right foot and it will amble along with you. A sturdier input and it will quickly drop down a couple of cogs to offer up a bit more intent.

It’s worth bringing the paddles into play when faced with the prospect of an open road. The paddles snick through with satisfying feel and sound, prompting immediate shifts. In sport and track, aggressive changes under hard acceleration induce a neck snapping quality as the McLaren 720S spider relentlessly hunts down the horizon.

Then, when the good times end, pop everything back into comfort and it all becomes very polite again.

What’s the McLaren 720S spider like to live with?

The accessible nature of the McLaren 720S spider means that, should you need, you could daily it. It’s that easy to drive. Without the heft and sheer size of some of the competition, you never take a deep breath along narrow passages. The vehicle lift function, part of the convenience pack, helps, giving it a ground clearance that easily scales speed bumps. If you’re getting a McLaren 720S spider, that is a must tick box. With plenty of exterior carbon fibre, it’s worth every penny of extra investment.

The ride is, as one would expect, firm. You will notice potholes and slow down for speed bumps. Along more undulating or interrupted surfaces, the steering wheel is alive in your hands. You need to focus on what you’re doing.

Otherwise, around town, it’s all very polite. The V8 only really starts to sing higher in the rev range, so in comfort mode you can pootle around without disturbing the peace. This was still a bright orange McLaren, however, so a few curious glances were inevitable.

There’s a 159-litre front trunk, enough room for a couple of weekend bags. McLaren has also thought about maximising space, with the option to store things where the roof is stowed for an extra 50-litres.

If you do want the roof down, which of course you will, the mechanism takes 11secs to complete its work and can be done up to 31mph. This was very handy when getting caught out by a spot of unexpected rain in Dorking.

On longer cruises, fuel consumption is surprisingly good. Whilst I achieved 16.9mpg across my 298.3 miles in the McLaren 720S spider, the accelerator pedal proved an irresistible siren call to me most of the time. A long motorway cruise would easily achieve around 30mpg.

Much like Moroccan rug makers deliberately stitching an imperfection into their work to represent our own imperfections as human beings in the face of the only perfect thing being Allah, so it feels like the slight misalignments in the McLaren 720S spider are deliberate on McLaren’s part. Without them, there would be nothing to criticise. They built the perfect car, then had to scale it back a bit. Otherwise, where is there to turn next? It would have been Beethoven’s Symphony No.9, Claude Monet’s Water Lilies or Rocky Marciano walking away from the Yankee Stadium in September 1955. The crescendo, the denouement, the final crowning glory; legacy and immortality assured. McLaren would have had to pack up and walk away, or face all eternity chasing the dragon of this car like a heavyweight forever damned to take on one fight too many. How can you improve upon perfection?

On the driving front, the McLaren 720S spider justifies every sentence ever written in praise of it. From the engine to the gearbox to the pedal modulation and the steering, it all comes together supremely. You can instantly see why so many have fallen over themselves to heap praise upon it. It feels perfectly weighted, perfectly balanced and perfectly in tune with itself. On the driving front, there’s nothing to fault.

With the move to hybridisation with the McLaren Artura, then the inevitable electrification of all cars, perhaps the McLaren 720S spider is, in a roundabout way, the denouement. Perhaps one day we’ll all wistfully look back and lament that they don’t make ‘em like that anymore. Or maybe things will march onwards for the better? Either way, this is a car that will live long in the memory of those fortunate enough to have driven it.