The large bronze sculpture is hoped to become an "iconic" landmark welcoming visitors to Colchester, Essex 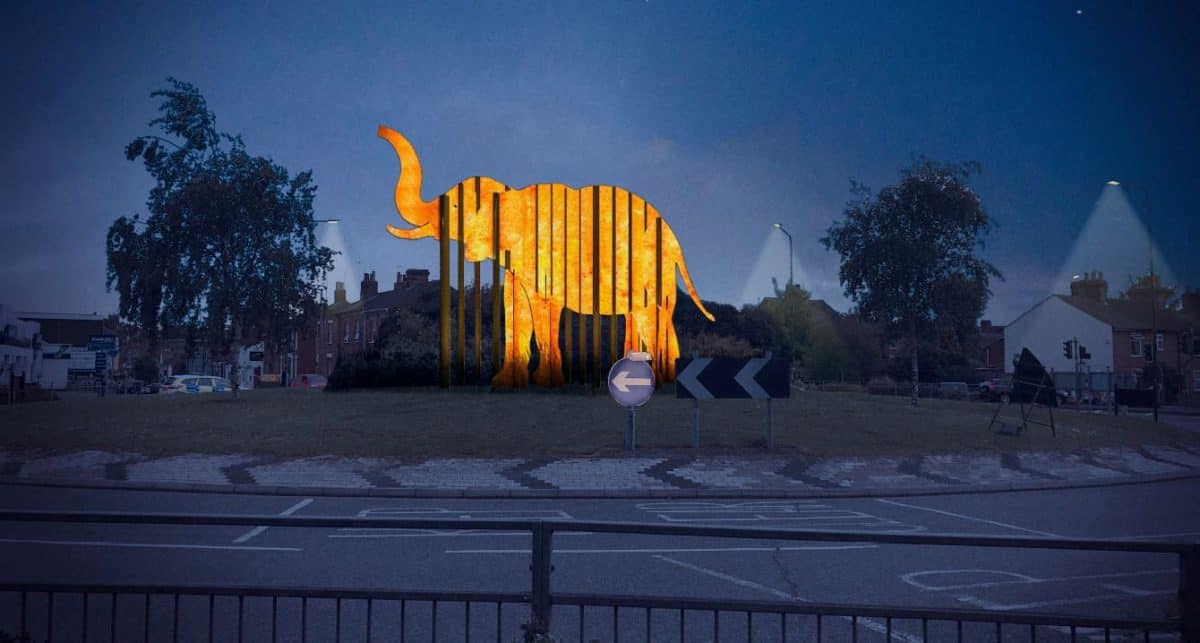 A GIANT £100,000 sculpture of an elephant planned for a town roundabout has been branded a “waste of money”.

The bronze sculpture has been inspired by Emperor Claudius’s dramatic arrival into Colchester with a “heard of elephants to celebrate the victory of the Roman invasion in 43 AD.”

It is hoped the model, which has been designed by architecture company Dallas Pierce Quintero, will become an “iconic” landmark welcoming visitors to the borough.

The sculpture, which will be fitted with 52 LED lights, is set to be built in the middle of the Albert roundabout, in Colchester, Essex.

The controversial monument is set to be decided on by the Essex county council planning committee tonight (28/2) and if the plan gets the go ahead “work on it can start imminently”.

However, Conservative MP Will Quince of Colchester, Essex has described the cost of the project as unjustifiable.

In a tweet, he wrote: “Colchester Council has decided to spend £100,000 of your infrastructure money on a giant elephant sculpture on the Albert Roundabout.

“I think this is unjustifiable – if you agree, please contact your local councillor and let them know what you think.”

Along with the tweet, he shared a video saying: “Colchester Borough Council has decided they are going to spend £100,000 of your infrastructure money putting a giant elephant sculpture in the middle of the roundabout.

“Now the government gives councils New Homes Bonus money, money for every house that’s built to be spent on infrastructure.

“I would question whether this is infrastructure and I’ve been catching up with Castle Ward, Darius Laws and he agrees with me that this is highly questionable.

“So I would ask you please to write to your councillor and ask them that question – ask them to justify how they can spend £100,000 of your infrastructure money on a giant elephant sculpture.”

And, Colchester residents were quick to share their thoughts on the idea.

Andy Bugg wrote: “A shocking waste by a Council that has lost it’s way and ignores.”

Sharon Gusterson tweeted: “A beautiful flower arrangement is so much more inviting and eye-catching than a metal eyesore!”

A council spokesperson said: “We set aside around £100,000 New Homes Bonus several years ago to support this phase of the ambitious Fixing the Link project being undertaken and funded with Essex County Council and Greater Anglia.

“The innovative scheme is being discussed by the Planning Committee on Thursday.

“If approved, it will provide an iconic addition to our borough with a wayfinding elephant sculpture directing people visiting the borough along an improved walking route from Colchester Station to our town centre.

A council spokesperson added: “The design is inspired by tales of Emperor Claudius’s dramatic arrival into Colchester with a herd of elephants to celebrate the victory of the Roman invasion in 43 AD, and if agreed it will help create a positive first impression for people coming to Colchester by rail.

“It forms part of longer term regeneration plans for North Station Road where we are seeking to create a conservation area status, providing buildings and the area greater protection.

“We have also been working to get some grant funding to improve some of the buildings in the road and the historic bridge crossing the river Colne.”