Tony Owens, 37, was travelling at 100mph on the M42 when it hit the car of Cathryn and Raymond Goode from behind with such force that Mr Goode was ejected, a court heard 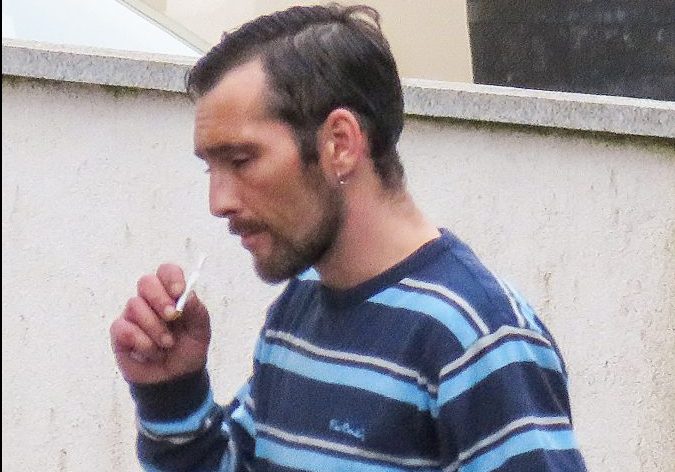 A dangerous driver has been jailed for killing a pensioner and seriously injured his wife before hiding from police in the woods.

Reckless Tony Owens, 37, was travelling at 100mph on the M42 when he hit the car of Cathryn and Raymond Goode from behind with such force that Mr Goode was thrown from the vehicle, a court heard.

Mr Goode, 83, died at the scene while Mrs Goode, also known as Jane, 74, suffered injuries including 11 fractured ribs, a broken thigh bone and broken upper arm in the incident on August 19, 2017.

Shockingly, Owens fled the scene and hid in nearby woodland until the next day when he handed himself in to Warwickshire Police but tried to blame Mrs Goode for the crash.

Owens, who had no driving licence or insurance, initially entered a not guilty plea to charges of causing death and serious injury by dangerous driving.

He made headlines after failing to attend his trial in January, after which police released a mugshot of him which was compared to Eastenders actor Dean Gaffney.

Owens, formerly of Charlbury Avenue, Fordbridge, Birmingham, was arrested on warrant and later admitted both charges.

He was jailed for nine years and banned from driving for ten-and-a-half years at Warwick Crown Court on April 12.

“You, a man with no driving licence and no insurance, and no right to be behind the wheel of a motor vehicle, set off in charge of a vehicle, not just on a B road or an A road, but on a motorway.

“Only you know what speed you were actually doing, but other road-users took note of it, and it was well in excess of the speeds those other people were travelling at.

“The stretch of road is a particularly straight section, and it makes it even more inexplicable that you, at high speed and moving between lanes, should not have seen the vehicle that Cathryn Goode, a healthy and active 74-year-old, was driving.

“Your vehicle was travelling at such force that it hit the vehicle Cathryn Goode was driving up in the air, and it caused her husband to be thrown from the vehicle.

“It killed him and caused her severe injuries which continue to have a significant impact on her.

“Most people in the position you found yourself would have done what they could, however inadequate it might be, to try to attend to Mr and Mrs Goode. You did nothing.

“You ran away in a completely cowardly fashion from the location, and even hours later you were seeking to look after yourself with no apparent concern for Mr and Mrs Goode.

“It is an unpleasant feature that you cast aspersions on her driving, even though you must have known it was you, and you alone, who was responsible for her injuries and the death of her husband.”

Observing that Owens had continued to deny the offences until his eventual guilty pleas, the judge added: “It is hard for me to accept, given the way you have behaved, that you are genuinely remorseful.”

They were in a gold-coloured Vauxhall Agila being driven by Mrs Goode.

The couple, who lived in Spain but had previously run a hairdressing salon in Atherstone, Warks., were returning from there to Coventry, West Mids., where they were due to stay with family.

Owens, whose licence had been revoked on medical grounds, was going in the same direction in a Peugeot 307.

He had overtaken other drivers at what some of them estimated to be 100mph, the court heard.

The Peugeot straddled two lanes, and despite a last-second attempt to brake and swerve, it hit the Goodes’ car from behind with such force that the Agila was thrown into the air.

As it rolled over, Mr Goode, a former soldier and a keen wildlife photographer, was thrown out, despite having been wearing a seatbelt.

He suffered catastrophic injuries and died at the scene.

Other drivers stopped to try to help him and Mrs Goode, who suffered injuries including 11 fractured ribs, a broken thigh bone and broken upper arm, but Owens fled from the scene.

He ran into nearby woodland where he hid, and the next morning he asked the landowner if he could call his mother.

He later handed himself in after washing and changing his clothes.

He admitted being the driver of the Peugeot, but denied being responsible for the crash, putting the blame on Mrs Goode.

In February of the same year, Owens, had been spoken to after hitting a child while driving the same car, but had escaped prosecution because of an administrative error.

The court heard Owens had previous convictions for driving with excess alcohol.

In a statement read to the court, Peter Goode, Mr Goode’s son, a retired police officer, said the death of his father and his step-mother’s “horrific” injuries had had a heartbreaking impact.

David Munro, defending, said: “The existence of the guilty plea is fundamental to the mitigation. He accepts entire and complete responsibility for the matter.

“In any case of this nature the damage that is caused will last for many, many years – and nothing the defendant can do or say at this stage can go very far to ease that.

“Whatever sentence is passed will not remedy the loss.

“His driving on the night in question cannot be excused, but it is hard to say over what period of time and what distance he drove at high speed, or what that speed was.

“This should simply not have happened. There must have been a complete failure to take notice of the Vauxhall in front of him, and when he did react, it was too little and too late.”