Jamil Khan, 35, rolled his car in Birmingham after reaching 90mph as he tried to outrun police who had spotted him illegally racing. 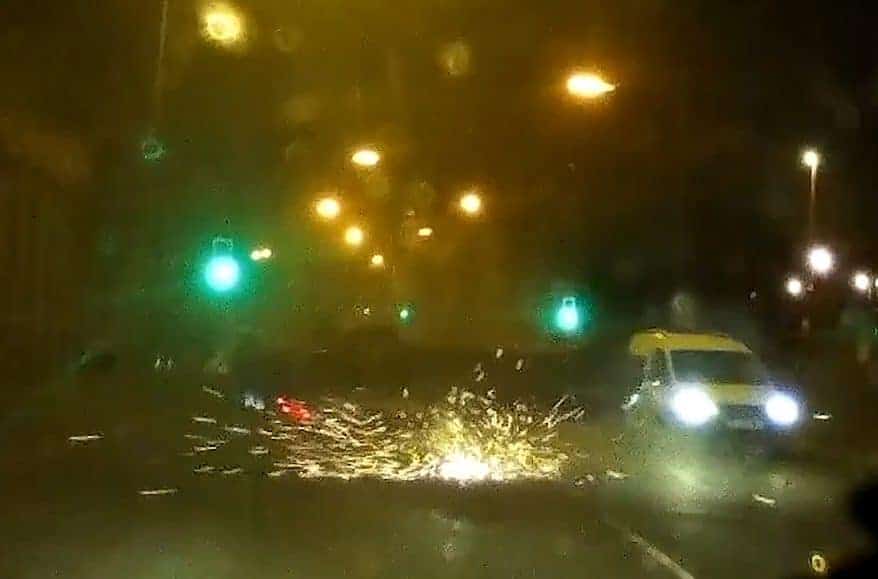 This is the terrifying moment a reckless driver overturned his Mercedes while trying to evade police during a 90mph chase.

Jamil Khan, 35, ploughed into another vehicle before flipping his luxury motor onto its roof after cops spotted him racing through Birmingham city centre.

Shocking dash-cam footage captured the impact of the horror crash as onlookers scream: “Oh my God, phone the police.”

Miraculously, Khan survived the smash on July 23 last year despite not wearing a seat belt and suffered only minor injuries.

Three minutes earlier, he and a BMW driver had raced away from traffic lights on Hagley Road, Birmingham, reaching speeds of 75mph.

An unmarked police car caught up with Khan on Broad Street, an area packed with bars and restaurants, but he sped away from officers when they tried to speak to him.

Khan went through a red light, undertaking a car on a roundabout and mounting a kerb as he hit 60mph in a 20mph limit.

He eventually hit 90mph in a 30mph zone before overtaking on a blind crest, colliding with a Ford Fiesta head on and rolling the car on the canal bridge.

Khan, of Smethwick,West Mids., was cut free from the car by emergency services and taken to hospital to be treated for a head injury.

Both his front seat passenger and the driver of the Fiesta sustained minor injuries in the crash, which happened just before 11pm.

Khan smelled strongly of alcohol, but refused to allow a blood sample to be analysed.

He was found guilty of dangerous driving, failing to allow a sample to be analysed and disqualified driving.

He was jailed for 26 months and banned from driving for four years at Birmingham Crown Court on August 13.

PC Dan Lynas, who pursued Khan, said: “This was appalling driving from Khan, who was lucky to escape from the collision that he caused with his life.

“We welcome this sentence and hope it sends a strong message to drivers who are willing to put lives at risk by driving dangerously.”