Footage shows William Deadman, 41, stopping his car, which appears to be a Mercedes E-Class, and abandoning it across two lanes on the busy A14 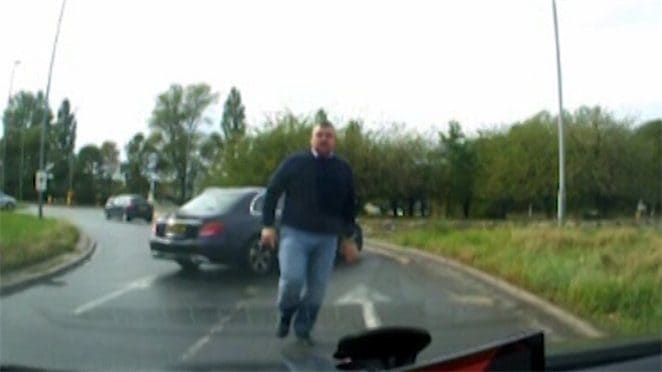 This is the shocking moment a raging driver jumped out of his £36,000 car and ran towards another motorist to attack him in the middle of a busy dual carriageway.

Dash cam footage shows William Deadman, 41, stopping his car, which appears to be a Mercedes E-Class, and abandons it across two lanes on the A14 in Cambridgeshire.

Deadman then forces the victim’s car door open and is seen punching the driver in the face, grabbing his car keys and jabbing him in the leg with them.

He then pulled the victim out of his vehicle and into the carriageway before a female motorist intervened and he drove off.

The victim suffered significant swelling to his face and received a small wound to his leg.

Deadman had been driving back to Birmingham after visiting family in Cambridge and had reacted furiously after believing the victim had pulled in front of him at Girton, Cambs.,

Deadman, of Birmingham, pleaded guilty to assault causing actual bodily harm and driving without due care and attention.

On Thursday (15 August) he was sentenced to 16 weeks imprisonment, suspended for 12 months, along with a nine month driving disqualification for dangerous driving.

In addition, he was also ordered to complete 120 hours of unpaid work and pay £250 victim compensation and £1200 prosecution costs.

PC Katie Housham said: “Deadman put not only himself and the victim in danger, but many other road users on the busy A14. The victim was a young driver who was very scared by Deadman’s behaviour.

“The dash cam footage in this case was key to the prosecution. If you believe you have seen dangerous or careless driving, you should always report it to us rather than taking matters into your own hands.”