Towering Lydon Sutcliffe, 32, makes his colleagues laugh each morning when he drives into work - after squeezing his 7ft 1in frame into his mum’s 60-inch high Smart Fortwo 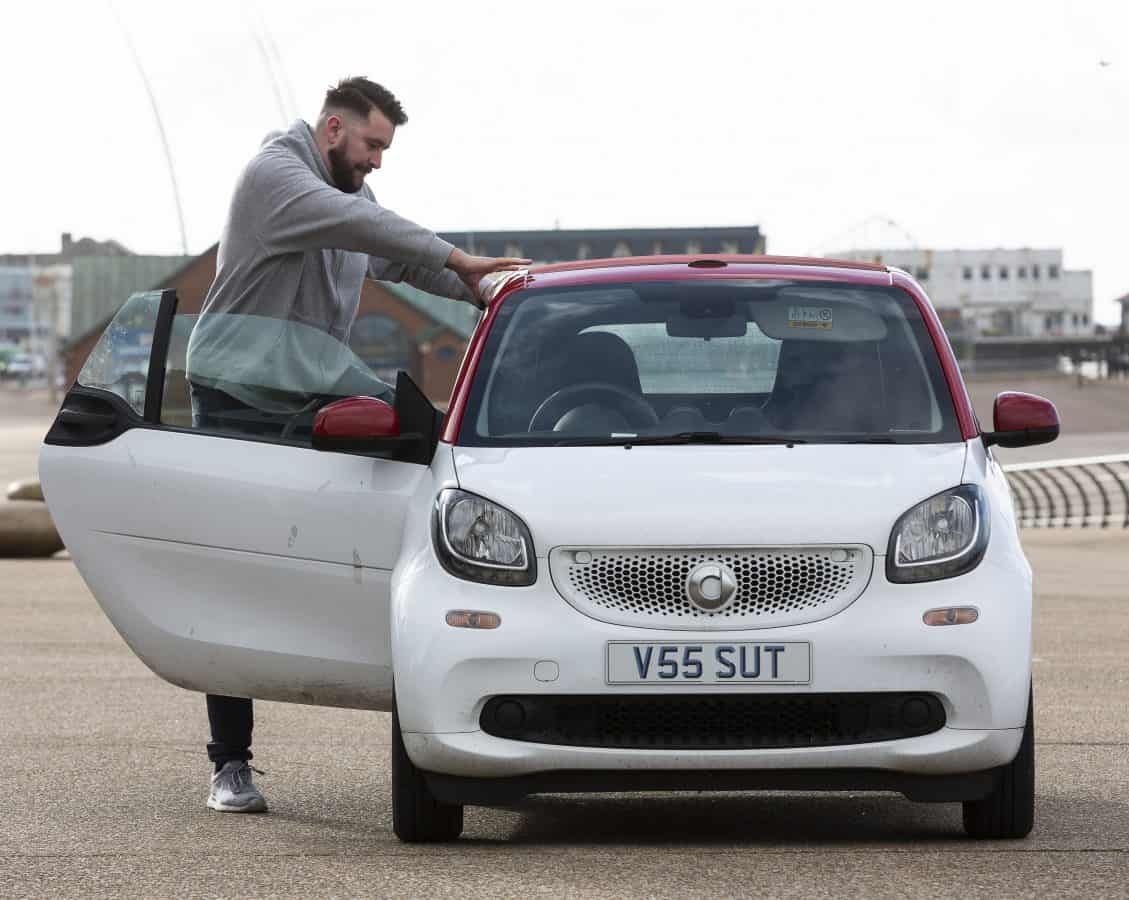 A man who stands at a staggering 7ft 1in struggles to fit in aeroplane seats – but drives around in a TINY smart car.

Towering Lydon Sutcliffe, 32, makes his colleagues laugh each morning when he drives into work – after squeezing his huge frame into his mum’s 60-inch high Smart Fortwo.

The friendly giant says he was mocked tirelessly as a boy for being so tall – after hitting 6ft when he was just ten – but his struggles have pushed him to help others.

No order is too tall for Lydon, who splits his time between his job as a disability support worker, a university counsellor and studying psychotherapy.

He had also appeared as an extra in Hollywood blockbuster, Rogue One and as a body double in Solo: A Star Wars story.

And the lofty bloke gets funny looks when he drives around Blackpool, Lancs., where he lives, as he travels in the tiny £16k 2016-model smart.

His Nissan Navara pickup truck broke down sometime in 2016 which left him with no choice but to drive his mum’s Smart – and he’s loved driving it ever since.

Lydon, from Blackpool, Lancs., said: “I bought the Smart four years ago for my mum because she needed a car.

“At the time I was driving a Nissan Navara pick up truck but it broke down and I thought I’d try to drive the Smart – and I fit. So I said why not?

“Everyone keeps asking me when I’m going to get a bigger car but it’s actually comfortable.

“When I get on planes it’s always a struggle because I have to buy extra seats or sit on Business Class just to fit. My legs always stick out.

“But I’ve got no issues with the smart. It’s like driving a go-kart for me and it’s a convertible so I do enjoy sticking my head out.

“People always do double takes when they see me in it, just because of how goofy it is – but I love it.”

The former Wimbledon groundskeeper became a support worker five years ago but said it’s been his lifelong ambition to help people in need.

Lydon, who claims to be able to hug 20 people at once, said: “I think it’s so important we talk about our issues and I want to help as many people who’re struggling as I can.

“As a tall person you suffer a lot of abuse throughout your childhood, you get mocked a lot and get made to feel horrible about yourself and many suffer with depression.

“But I want to spread positivity, and encourage people to talk. That’s my mission – I’m a big guy, with a big message.

“At work they call me the BFG, and that’s what I want to be. A big friendly giant.”

Lydon, who lives with his girlfriend, has lived an interesting life and has his own big name fans – as tennis legends Andy Murray, Roger Federer and Rafa Nadal all approached him for pictures at Wimbledon.

He also played the role of “tall Ant” on ITV’s Ant and Dec’s Saturday Night Takeaway and a tall Jimmy Carr on 8 out of 10 cats.

He’s a big fan of Tyson Fury, who similarly battled his own mental health issues before becoming a boxing world champion, and has met him on several occasions.

The part-time stand-up comic said: “I’ve met Tyson Fury – he’s a great guy and I think it’s nice to see him have success after everything he’s been through with his mental health.

“I’m probably the only person who makes him look small, like a little brother.”

Lydon’s parents aren’t particularly tall, with his dad standing at 6ft 3in and his mum 5ft 6in – but his sister Rachel stands at 5ft 10in and his “little” brother Spencer is a short 6ft 6in.

His striking height means his encounters with people centre around his towering presence.

Lydon, who wears a size 15 shoe, said: “I had a woman recently ask me to pick something up for her at the supermarket, and thankfully she helped me get some of the things on the lower shelves I can’t reach.

“A lot of people will also assume I’m a basketball player or ask if I am one, and I always tell them my preferred sport is actually miniature golf.”

He consumes over 8,000 calories a day to satisfy his massive appetite, but says he’s always been skinny.

Lydon, who weighs 22 stone, said: “I was always really skinny but now I eat a lot. I eat thousands of calories every day, people think I’m greedy but I’m just a big lad.

“If I order a Maccies I’ll get a grand BigMac, three double cheeseburgers, three large fries, 20 chicken nuggets, two cokes and a milkshake to treat myself.

“People don’t realise how expensive it is to be tall.”