The United States Federal Communications Commission (FCC) voted along party lines – three Republicans vs two Democrats to end Net Neutrality and the principle of a free internet that everyone can access equally. – A principle that heralded an era of innovation, freedom of speech and new forms of communication and social organisation predicated on […]

by Ben Gelblum
in Science, Tech and Auto, World News 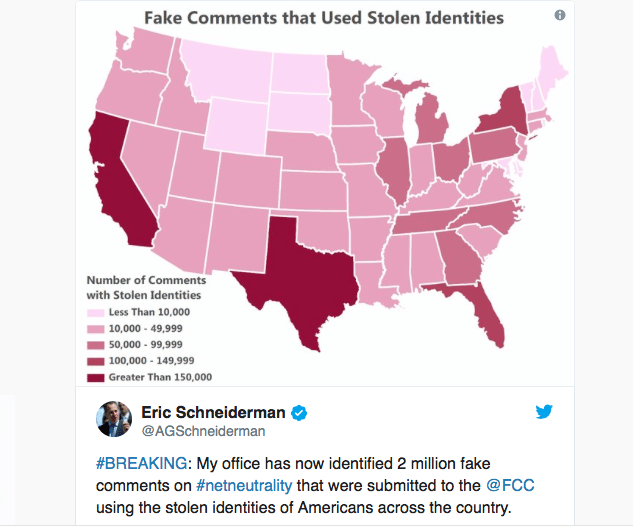 The United States Federal Communications Commission (FCC) voted along party lines – three Republicans vs two Democrats to end Net Neutrality and the principle of a free internet that everyone can access equally.

– A principle that heralded an era of innovation, freedom of speech and new forms of communication and social organisation predicated on everybody’s voice being able to be heard equally online.

The Chairman of the FCC Ajit Pai had been appointed by President Trump, an opponent of Net Neutrality. So are some of the big internet service providers who spent tens of millions lobbying for this decision despite 80% of the US public opposing it, as they will be free to charge different prices for different types of content now.

For now the freedom of the Internet in the UK is safe as we are still bound by EU principles of Net Neutrality. But depending on how the fight goes in the USA, there may well be a knock on effect on Internet freedom around the world.

The politically partisan decision is a reversal of President Obama’s regulations to protect Net Neutrality in 2015. “It is not the job of the government to pick the winners and losers of the internet,” said Ajit Pai. “We should have a level playing field.”

The repeal of the 2015 rules could mean the internet has slower and faster lanes depending on who is providing content or how much people are willing to pay for fast internet provision.

Senator Bernie Sanders called the move “an egregious attack on our democracy,” warning that “the internet will be for sale to the highest bidder.”

This is an egregious attack on our democracy. The end of #NetNeutrality protections means that the internet will be for sale to the highest bidder. When our democratic institutions are already in peril, we must do everything we can to stop this decision from taking effect. https://t.co/8GGrJFMdrU

And Elizabeth Warren called on Congress to repeal the rule and “defend a fair and open internet.”

The FCC just voted to hand control of the internet over to giant internet companies, but this isn’t over. Congress must step up to repeal this rule, restore net neutrality protections, and defend a fair and open internet.

Trump’s @FCC just voted to give away the free & open internet to big corporations—completely disregarding what the American people want. #NetNeutrality

Democrat FCC commissioner Jessica Rosenworcel, who voted against the three Republican commissioners led by Ajit Pai said he had presided over a “corrupt process,” and exhibited “contempt and sheer disdain” for the public.

“As many as 2 million comments” on the US Federal Communications Commission’s proposal had been discovered to have been faked, the office of the attorney general of New York had revealed, and he had called for the process to halted while it was investigated how identities of real living and dead people been falsely used to create an impression that there was public support for the move.

Republican Speaker Paul Ryan hailed the decision, saying “the way to keep the internet free and open and protect consumers is to crack down on internet service providers that would abuse open access.”

This is the right call by @AjitPaiFCC and the @FCC. The way to keep the internet free and open and protect consumers is to crack down on internet service providers that would abuse open access. https://t.co/5kxwSZGJzt pic.twitter.com/oIiwSvKqbh

But there was widespread criticism from some of the internet’s biggest innovators.

“#NetNeutrality allowed me to invent the web. If protections are scrapped, innovators will have to ask ISPs for permission to get their ideas out – a disaster for creativity. A disaster for the internet.”

#NetNeutrality allowed me to invent the web. If protections are scrapped, innovators will have to ask ISPs for permission to get their ideas out – a disaster for creativity. A disaster for the internet. Tell your Reps to stop the vote. https://t.co/WlTfbe9ZNg … @webfoundation

Streaming giant Netflix called the move “misguided”, and said it stood with innovators in fighting it.

We’re disappointed in the decision to gut #NetNeutrality protections that ushered in an unprecedented era of innovation, creativity & civic engagement. This is the beginning of a longer legal battle. Netflix stands w/ innovators, large & small, to oppose this misguided FCC order.

Mozilla chair and cofounder Mitchell Baker warned that “these rules allow a small set of companies and a small set of individuals to make decisions about the communications platform for all of us.” She told CNN that the ruling allowed a small elite to be in control of the American public’s communications: “it means that just a very small handful of people and the businesses and the motives that motivate them actually determine the communications that’s available to all the rest of us.”

Reddit CEO Steve Huffman and cofounder Alexis Ohanian thanked the platform’s users for for their “incredible activism on this issue” and pledged “to reassure you that we’re going to continue fighting for the free and open internet.”

“Today’s vote is the beginning, not the end. While the fight to preserve net neutrality is going to be longer than we had hoped, this is far from over,” they said in a statement on reddit.

In a scathing piece, The Register branded him a “clown”, writing:

“In a clear reflection of the lowest-common denominator approach adopted by Donald Trump in his presidential campaign, Pai has relied on mockery and disparagement as way to push back on sincerely held concerns.

“Even on the eve of the vote, Pai starred in a video produced by right-wing whinge-site The Daily Caller in which he dressed up as Santa and Luke Skywalker, among others, and gave a list of things you “will still be able to do” once the net neutrality safeguards are voted out.”

Ajit Pai is the Martin Shkreli of technology policy pic.twitter.com/Ns52EodMP1