It was first Blood to Wenger today, as Arsenal overcame Manchester City 3-0 in the Community Shield. After the game Arsene, speaking to BT Sport, said: “Overall it was a united team performance. Aaron Ramsey’s goal was good and it showed that the belief was there, but what I keep in mind is that it […] 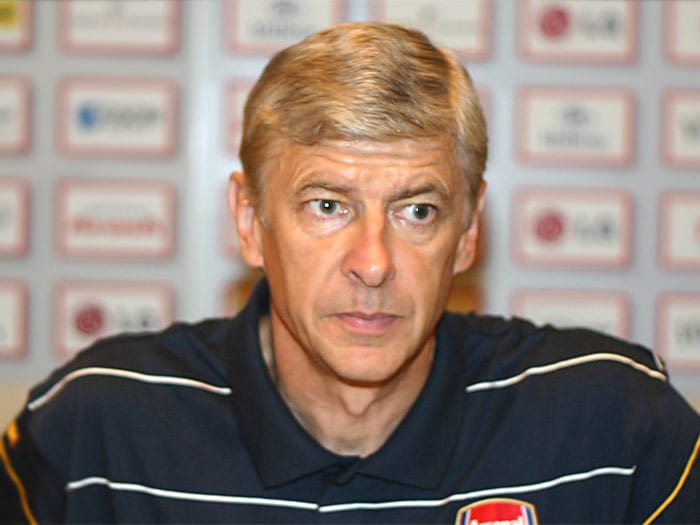 It was first Blood to Wenger today, as Arsenal overcame Manchester City 3-0 in the Community Shield. After the game Arsene, speaking to BT Sport, said: “Overall it was a united team performance. Aaron Ramsey’s goal was good and it showed that the belief was there, but what I keep in mind is that it was a real team performance.”

Ok not the best quote in the world, so here are his top 30 best lines…

1)[On Emmanuel Adebayor’s stamp on Robin van Persie] “I watched it when I got home and it looked very bad. You ask 100 people, 99 will say it’s very bad and the hundredth will be Mark Hughes.”

4) [After Martin Taylor snapped Eduardo’s leg in half] “The guy should never ever play football again.”

6) “You have to be a masochist to be an international manager.”

7) “Nobody has enough talent to live on talent alone. Even when you have talent, a life without work goes nowhere.”

8) “At some clubs success is accidental. At Arsenal it is compulsory.”

9) “I don’t kick dressing room doors or the cat or even football journalists.”

11) “What’s really dreadful is the diet in Britain. The whole day you drink tea with milk and coffee with milk and cakes. If you had a fantasy world of what you shouldn’t eat in sport, it’s what you eat here.”

13) “We were considering him [Ruud van Nistelrooy] and Francis Jeffers and, in the end, we went for Jeffers.”

14) [On losing the lead of the league in November 2004] “It’s like a child who is used to having ice cream whenever he wants. When it doesn’t come when he asks he tends to get confused and nervous.”

15) “Gerard is an open-minded and passionate man. I am the opposite: stubborn and stupid. But sometimes stupid behaviour makes you win.”

16) [Upon being asked what he does with his spare time] “I watch football.”

17) “I tried to watch the Tottenham match on television in my hotel yesterday, but I fell asleep.”

18) “When I first came to Arsenal, I realised the back four were all university graduates in the art of defending. As for Tony Adams, I consider him to be a doctor of defence. He is simply outstanding.”

19) [After the Arsenal fans booed a 1-1 draw with Middlesbrough in November 1998] “If you eat caviar every day it’s difficult to return to sausages.”

20) “Sometimes now, when I watch continental games on television, I’m a bit bored. I’m thinking: ‘Where is the intensity?'”

21) [In 2003] “It’s not impossible. I know it will be difficult for us to go through the season unbeaten. But if we keep the right attitude it’s possible we can do it.”

22) [On Jose Mourinho after the then Chelsea boss accused him of being a voyeur] “He’s out of order, disconnected with reality and disrespectful. When you give success to stupid people, it makes them more stupid sometimes and not more intelligent.”

23) “A football team is like a beautiful woman. When you do not tell her, she forgets she is beautiful.”

24) [After the success of the Great Britain team at the Olympics] “I didn’t know the English were good at swimming. I have been in this country for 12 years and I haven’t seen a swimming pool.”

25) [After the departure of Sol Campbell to Portsmouth] “It is a big surprise to me because he cancelled his contract to go abroad. Have you sold Portsmouth to a foreign country?”

26) [Upon being asked if he had received the apology that Sir Alex had announced he had sent to Wenger] “No. Perhaps he sent it by horse.”

28) [In response to Sir Alex Ferguson’s claim that he possessed the best team in the league despite Arsenal winning the title in 2002] “Everyone thinks they have the prettiest wife at home.”

29) “Ferguson should calm down. Maybe it would have been better if he had put us against a wall and shot us.”

30) [After Jose Royes announced he wanted to leave Arsenal] “It’s like you wanting to marry Miss World and she doesn’t want you. I can try to help you but if she does not want to marry you what can I do?”