Shocked onlookers have told of the moment “all hell broke loose” in a posh spa town when up to 40 suspected football hooligans had a mass brawl. Children as young as 12 are believed to have been involved in the fight – with reports of green smoke canisters being thrown and men wearing balaclavas. The […] 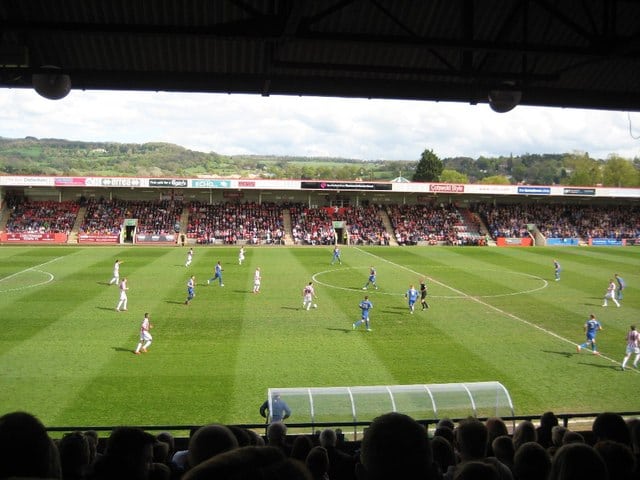 Shocked onlookers have told of the moment “all hell broke loose” in a posh spa town when up to 40 suspected football hooligans had a mass brawl.

Children as young as 12 are believed to have been involved in the fight – with reports of green smoke canisters being thrown and men wearing balaclavas.

The violence, which took place on Saturday at the Promenade in Cheltenham, is thought to have been linked to the ‘El Glosico’ football match between local rivals Cheltenham Town and Forest Green Rovers.

Lib Dem councillor Peter Jeffries was out shopping when he saw the fight break out.

He said: “I was outside Cavendish House and all hell broke loose towards the bus rank. I can only presume a bus full of fans got off, and a big flare was let off.

“There was smoke everywhere. Everyone was running backwards and forwards in a running battle for four minutes, maybe longer.

“One young guy was getting kicked on the floor by a group of men. He managed to get away.

“I was on the phone to police. I was talking to a very distressed elderly lady who could not walk to her bus.”

Mr Jeffries added that he was shocked by the “definite intent” and “premeditated” nature of the incident.

He added: “It’s the sort of thing you see on the telly. It’s childish stupidity. I could see families who were in a bit of shock. It’s disgusting behaviour.”

The councillor said the brawlers eventually split into groups that headed into different directions, with one going towards Clarence Street and another towards Imperial Square.

Mr Jeffries believes the offenders were mostly in their late teens and early 20s.

Jess Cadbury, a 30-year-old sales adviser at the Jigsaw clothes shop, said some of those fighting looked as young as 12.

She added: “The centre-point was right outside our shop. There were two groups fighting and the people in the middle were making contact.

“They were throwing punches. There was a lot of shouting.

“They were wearing quite dark hoods and jackets, and there were a lot of caps. It didn’t get too grisly.

“There was a lot of bravado. It felt like neither side really wanted to get into the fight. It was quite funny, really.”

Miss Cadbury also saw a canister of green smoke thrown by one group. She said the fight ended when this group chased the other one towards Clarence Street.

Neither Miss Cadbury nor Mr Jeffries saw anyone sustain a serious injury, but another witness, Shirl Mace, had concerns for the wellbeing of a young man she saw on the floor getting kicked by three men.

The Flower Man stall owner believes he could be “really hurt”.

She added: “I’ve run this stall for 23 years and I’ve never seen anything like this. There was green smoke like in Batman.

“It was very scary. I heard one lady said to another, ‘Surely not in Cheltenham?’ I thought the same.”

A police spokesman said: “Police want to reassure the public that violent disorder will not be tolerated and we will ensure that we identify those responsible and make arrests.

“We do not want this type of public affray to escalate or to see anyone injured.”