By Chris Woods A powerful and resolute Chelmsford City side ensured Wealdstone’s faltering start to the season continued after the Stones were defeated 0-2 at Grosvenor Vale on Saturday. In front of another 900 plus crowd, Stones could have few performance complaints on the day but the denial by referee Ryan Atkin of at least two […] 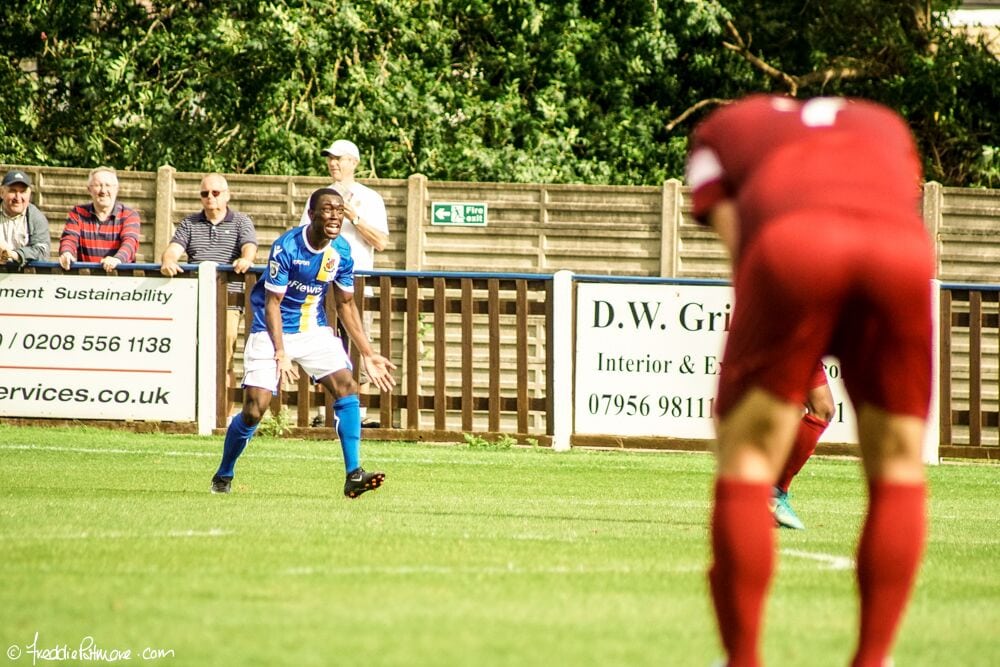 A powerful and resolute Chelmsford City side ensured Wealdstone’s faltering start to the season continued after the Stones were defeated 0-2 at Grosvenor Vale on Saturday.

In front of another 900 plus crowd, Stones could have few performance complaints on the day but the denial by referee Ryan Atkin of at least two nailed on penalties in both halves of the action only served to rub salt into ever deepening wounds. The latter decision, when Shaquille Hippolyte-Patrick was blatantly pushed over in the box, resulted in the dismissal of an incensed Assistant Manager Scott McGleish

The Clarets Chris Dickson netted a fine opener 12 minutes into the second half with his strike partner Lee Barnard sealing the victory from the spot ten minutes later.

Gordon Bartlett threw Leyton Orient loanee Aron Pollock straight into the action where he partnered Ciaron Brown at centre-back with Josh Hill denied a game against his previous club through injury. The 19 year old Pollock performed admirably throughout and, notably, was one of few stand out performers, clearing two certain goals off the line.

The Clarets started with pace and physical dominance, and that continued throughout the 90 minutes, with boss their Rod Stringer left wondering how his side didn’t score more.

Remarkably, they could and should been three-nil up in the first ten minutes with Chris Bush swerving a 25-yard free-kick off the bar, Dickson lobbing Jonathan North only to see his effort bounce off the bar and Matthew Johnson have a strike cleared off the line by a well-positioned Pollock.

Wealdstone’s best effort of the game came on 49 minutes but the quick-thinking Sam Beasant rushed out to thwart Elliot Benyon from close range. Stones tried hard to settle under unrelenting pressure and were relieved to somehow go in 0-0 at the break.

It seemed the Stones’ luck was in but Chelmsford fans fears of a stalemate were calmed when, soon after the re-start, Dickson smashed a well-placed effort past North into the bottom-left corner.

Barnard doubled the lead ten minutes later after the softest of touches in the area by sub Matty Whichelow. He dispatched his effort to the left of the goal, sending North the wrong way and the Clarets home to Essex with all three points in the bag with no way back for the home side.

Michael West was denied a deserved goal late on by the post to give Gordon Bartlett a very unhappy 22nd anniversary of his first Wealdstone game in charge.

Stones travel to Eastbourne Borough next Saturday hoping that they can re-galvanise themselves with some sea air on the plastic playing surface.