“It wasn’t about making a political statement – human rights are non-negotiable. That should be taken for granted, but it still isn’t the case." 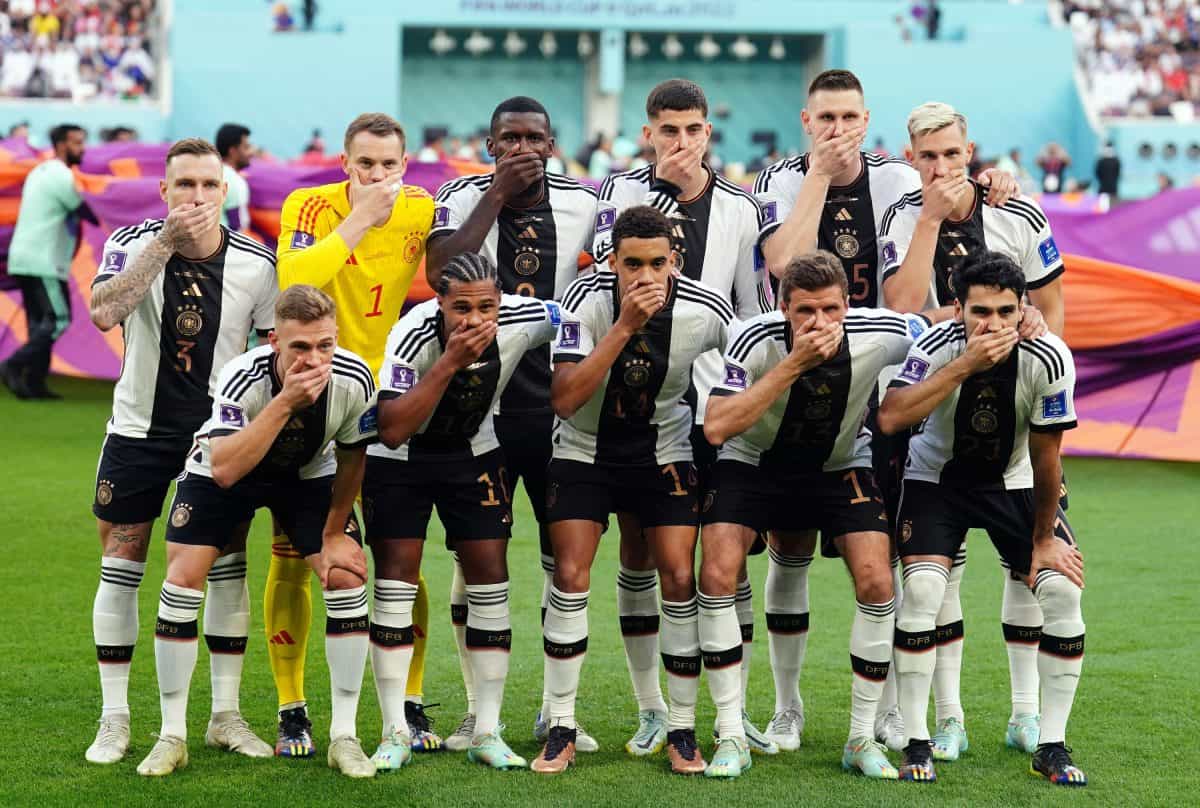 Germany’s players covered their mouths for a World Cup team photograph on Wednesday in protest at being blocked from wearing an anti-discrimination armband.

The national team players made the gesture as they prepared for kick-off in their opening match against Japan at the Khalifa Stadium.

It followed a joint statement from seven European nations, including Germany plus England and Wales, to drop plans to wear the ‘OneLove’ armband after threats of sporting sanctions from FIFA.

Not a “political statement”

The German football federation, the DFB, said in a tweet on its official account: “We wanted to use our captain’s armband to take a stand for values that we hold in the Germany national team: diversity and mutual respect. Together with other nations, we wanted our voice to be heard.

“It wasn’t about making a political statement – human rights are non-negotiable. That should be taken for granted, but it still isn’t the case. That’s why this message is so important to us. Denying us the armband is the same as denying us a voice. We stand by our position.”

England were hours from kick-off in their opening match against Iran when the seven nations issued a joint statement to say the plans to wear the rainbow-coloured armband were being abandoned, with FIFA having raised the threat of sporting sanctions, starting at yellow cards being shown to the captains wearing them.

The wearing of the band is part of a year-long campaign which began in September but was set to be especially significant in Qatar, where same-sex relationships are criminalised.

Danish FA chief executive Jakob Jensen said the group were now exploring the legal options open to them, but at this stage they could not go to the Court of Arbitration for Sport without exhausting other options first.

The PA news agency understands lawyers are looking at the regulations to examine the sanctions the associations were threatened with.

While that in itself is not a major escalation, Germany’s move certainly is and could attract disciplinary action from FIFA which would send the row spiralling on.

Article 11 of FIFA’s disciplinary code, which covers ‘offensive behaviour and violations of the principles of fair play’ says that anyone “using a sports event for demonstrations of a non-sporting nature” may be subject to disciplinary measures.

FIFA had no immediate comment on the matter when contacted by PA.

Danish FA chairman Peter Moller also said earlier on Wednesday his organisation was considering leaving FIFA altogether, and had been since August.

“It is not a decision that has been made now. We have been clear about this for a long time. We have been discussing it in the Nordic region since August,” he said, in quotes reported by The Athletic.

“I’ve thought it again. I imagine that there may be challenges if Denmark leaves on its own. But let us see if we cannot have a dialogue on things.”

Related: England off to a winning start – but it’s this Rishi Sunak video that has everyone talking

Watch: Suella Braverman’s cringe response to losing out in race to become PM