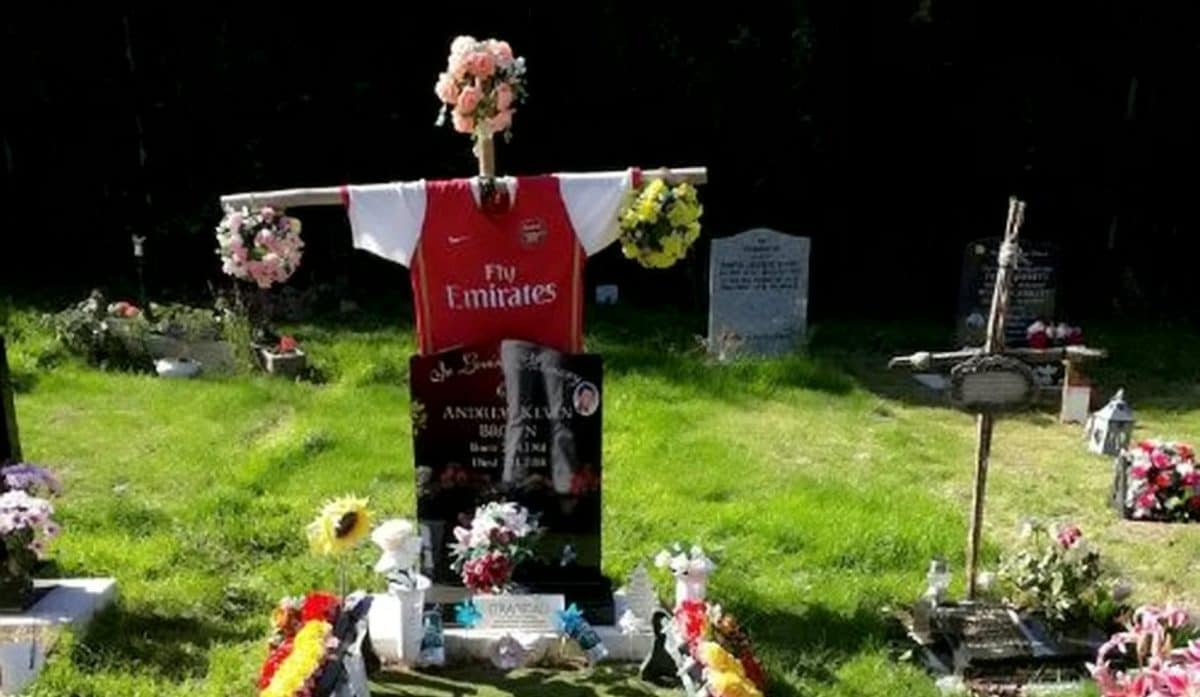 A horrified widow has been ordered to remove an Arsenal football shirt from her Gooner husband’s grave.

Avid football fan Andrew Brown was obsessed with the club – and was even a real-life ‘Gunner’ in the army.

The father-of-four died aged 57 in November 2018 and loved ones celebrated his life with a shrine at his resting place.

They installed a famous red and white football shirt taking centre stage hanging on a cross.

But following a recent inspection, his widow Dee, 61, received a letter from Exeter City Council ordering her to remove the personal tributes.

She has now been given two weeks before they are forcibly taken away.

Carer Dee, of Exeter, Devon, said: “I was devastated when I received this letter two days ago. I just thought ‘is this for real or am I dreaming?’

“It has not been left neglected and we visit to tend to it regularly.

“He just absolutely loved Arsenal. He was a gunner in the army and Arsenal was his biggest passion.

”He had every shirt and my son turned them into pillows for us after he died.

“We wanted things on display that were a big part of life and it is not nice they are taking away what he loved.

“This has sent me right back again and brought up all the old heartache.

“We will definitely not be moving them. They can stay where they are. I can’t and won’t do it.”

Dee described her husband, who died from cirrhosis of the liver, as a hard working man who started drinking to block up some trauma from his childhood.

She added: “He was in the army as a gunner and when he came out of the forces he worked a builder.

”We married in 1982 and had four children and now have 12 grandchildren.

“He was a good man. We thought it would be really nice to have his Arsenal t-shirt on his grave along with the things he loved.

“My daughter made the cross and we had artificial flowers sprayed red and yellow for the Arsenal home and away shirt.

”Every time people went there they said how really nice and colourful it looked. They said it looked amazing.

“My son has written to the MP and my message to the council is please, please just leave it as it is. People like it and it is not doing any harm to anybody.

“I am so emotional about it and find it deeply offensive the use of the word inappropriate.

”Who are they to deem that? Drinking John Smith beer cans was a big part of his life. At birthdays, Christmas, anniversaries he was always drinking one.

“Despite how he died it was a part of who he was and the council shouldn’t be taking that away. We paid a lot for this plot and it is just wrong.”

In the letter Exeter City Council told Dee she must remove the Arsenal football shirt and the cross it is on, artificial flowers spelling out the words ‘dad’, ‘grandad’ and ‘husband’, and the two beers cans.

She was told they were ‘not appropriate’ and do not ‘conform’ to cemetery rules.

In the same row is another grave which also has a football shirt on a cross along with an array of other personal tributes.

In the letter sent to Mrs Brown, sent by Exeter City Council’s cemetery manager, it states: “I was recently up at Exwick Cemetery doing an inspection and unfortunately there appears to be a number of tributes around the grave that do not conform to the rules we have in the cemetery regarding grave goods, and are not in keeping with the rest of the site.

“The artificial flower arrangements that you have placed around the plot need to be removed please. They are falling onto neighbouring graves and will make it difficult for us to cut the grass in this area once the weather becomes drier.

“There are a number of beer cans on the grave. These are not prohibited I’m afraid, and also need to be removed.

“Finally, the football shirt and large cross it is hanging from will also need taking down. As an Arsenal fan myself, I know how strong a connection someone can have for a team, and in the months after a funeral we do give some leeway in tributes that family and friends want to leave for those that have passed.

“However, I am responsible for keeping the cemetery clean and tidy for all those that visit it to pay their respects, and to have a shirt on display like this is not appropriate or in keeping with the rest of the site.

“I ask that these items please be removed as soon as possible. If they are present in two weeks then we will have no other option but to remove them ourselves.”

In a statement Exeter City Council added: “Everyone who comes to the cemetery comes to grieve. It is a really special place for so many people.

“Therefore we need to uphold some basic principles on behalf of everyone who considers it a sacred place.

“Despite the difficulty in writing to someone who will be on a journey of grief, we have to do so for the benefit of others.”