Arsenal FC has officially welcomed its new head coach Unai Emery this morning. The Spanish veteran manager joins the North London, having left French champions Paris Saint-Germain after guiding them to the Ligue 1 title. The Gunners’ Chief Executive Ivan Gazidis said that the 45-year-old was the “unanimous” choice to “drive the next chapter” of […] 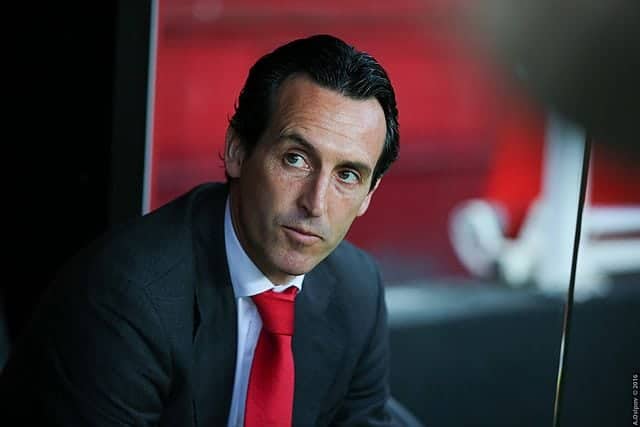 The Spanish veteran manager joins the North London, having left French champions Paris Saint-Germain after guiding them to the Ligue 1 title.

The Gunners’ Chief Executive Ivan Gazidis said that the 45-year-old was the “unanimous” choice to “drive the next chapter” of the club’s history.

Emery steps into the very big shoes of Arsene Wenger who left at the end of the season after 22 years at the helm of the club.

“I’m very excited to be given the responsibility to start this important new chapter in Arsenal’s history,” said Emery, who has won the treble of Ligue 1, Coupe de France and Coupe de la Ligue during his two years at the club.

Announcing the appointment today on Arsenal’s website, Ivan Gazidis said: “Unai has an outstanding track record of success throughout his career, has developed some of the best young talent in Europe and plays an exciting, progressive style of football that fits Arsenal perfectly. His hard-working and passionate approach and his sense of values on and off the pitch make him the ideal person to take us forward.

“We conducted a confidential, wide-ranging and rigorous search involving extensive background references, data and video analysis, and personal meetings with all the candidates we shortlisted. All were interested in the position and we were unanimous in our choice of Unai to drive the next chapter of our history.”

“I am thrilled to be joining one of the great clubs in the game,” said Emery.

“Arsenal is known and loved throughout the world for its style of play, its commitment to young players, the fantastic stadium, the way the club is run.

“I’m excited about what we can do together and I look forward to giving everyone who loves Arsenal some special moments and memories.”

Why was Emery chosen over Arteta?

Manchester City assistant manager and former Arsenal captain Mikel Arteta was the favourite to take over, but could not match Emery’s breadth of top level head coach experience.

Gunners fans would have been excited to see another former club legend come back in a coaching role. Especially having just been part of Pep Guardiola’s 100-point Premier League record glory. Arteta is reputed to be Guardiola’s most trusted lieutenant and had been linked to Everton – a club with ambition and money to match after manager Ronald Koeman was sacked.

But as Arsenal bid farewell to Arsene Wenger, whose 22 year leadership at the club is in stark contrast to the Premiership managerial merry-go-round, a trusted pair of hands with the breadth of managerial experience of Emery is a much safer bet.

Not everyone is 100% convinced though.

Arsenal legend Ian Wright counded a note of caution. He warned BBC Radio 5 Live of his constant concern about his former club’s tight purse-strings: “What’s going on at Arsenal? Where’s Unai Emery come from? I can’t get it out of my head.

“You’d have thought that by now they would have known exactly what’s going on.

“Emery has had loads of money to spend at Paris St-Germain and now has to come to Arsenal with £50m, with a bunch of players who have been playing in second gear.

What is Unai Emery’s track record?

Last month, despite the Ligue 1 title, Emery announced that he would be leaving Paris Saint-Germain, and a team packed with galacticos, especially Neymar, the manager’s nemesis according to some sources at the club.

Unai Emery came from Basque footballing stock, following his father, uncle, grandfather into a career playing soccer.  But he only played five times for Real Sociedad at senior level, before moving into Spain’s lower divisions, ending his playing career in injury at Lorca Deportiva.

But the club’s proprietor took a punt on Emery making him manager at Lorca Deportiva, a team he transformed and promoted to the second division.

Emery repeated his achievements, spearheading the promotions of his next clubs Almeria and Valencia.

It’s his record at Sevilla that brought the manager global acclaim. There he showed off his transformative power and ability to nurture young home-grown talent into a formidable force without the mega-bucks at his disposal in his last gig at PSG.

In his three seasons at Sevilla, he won an unheard of three consecutive Europa League titles in 2014, 2015, 2016. This speaks volumes about Emery’s tactical nous in matches where it counts. The last of these Europa wins English fans will remember as the 3-1 tactical rout of Jurgen Klopp’s Liverpool in Basel.

However the Champions League silverware has eluded Emery in his two seasons at PSG.  Barcelona turned PSG over, despite a 4-0 first leg advantage, and then this year finalists Real Madrid knocked the French club out.

At PSG there are reports that he found it difficult to control the egos – especially Neymar’s. Emery is unlikely to find any players as feisty as the Brazilian star at the Gunners.

Emery started at the French champions with great promise, beating Lyon 4-1 in the 2016 Trophee des Champions (French Community Shield), where they played with a vigour nobody had seen before.

If Arsenal can adapt from the Arsene Wenger era of beautiful football to Emery’s high-paced, pressurising, running, defending and attacking style, with every player on the team sprinting forward, other Premiership teams have much to fear.

The Spaniard flits between a 4-2-3-1 formation and a slight 4-3-3, with flexible, multi-tasking midfielders, sweepers and wingers.

His greatest achievements have been building up teams without the level of financial resources that PSG enjoy.

The Spanish clubs where he made a name for himself were often riddled with debt.

So he may be an ideal choice to lift Arsenal to a Premiership place above the sixth place they appeared destined to languish at this season with the club’s infamously tight budgets.

Emery is renowned for discipline, drills and hands-on coaching which might be just what Arsenal players need right now.

On top of that at Sevilla he became renowned for spotting and nurturing young talent which will fit well with the ethos at Arsenal, where he has a few youngsters he could bring the best out of.

With a few wise buys, Arsenal has the building blocks of becoming a major Premiership force again, with super-fast players such as Hector Bellerin and Pierre-Emerick Aubameyang that should be able to adapt to his blitzkrieg football.

Former Arsenal striker Ian Wright conceded on BBC Radio 5 Live: “If we do see a difference in intensity, drive and consistency, everybody will get onside and that’s all Arsenal fans want to see.”

Arsenal’s majority owner Stan Kroenke in a statement on the club’s website today said: “We’re delighted to welcome Unai to Arsenal. He’s a proven winner. We’re confident that he is the right person for the job and that he will work to deliver the triumphs our fans, staff and everyone who cares about Arsenal want.

“Several things stood out during his interview and the entire process; his football knowledge, energy, determination and love of the game. His familiarity with our club and our players, the Premier League and the game in Europe were all very impressive. He shares our vision to move forward, to build on the platform created by Arsène Wenger and help this club enjoy greater success.”