After 22 years at the helm of Arsenal FC, the Premiership’s longest current managerial reign is set to end this summer. Arsène Wenger has confirmed he is set to retire at the end of the second season in a row which has seen Arsenal fail to finish in the top four. On the North London […] 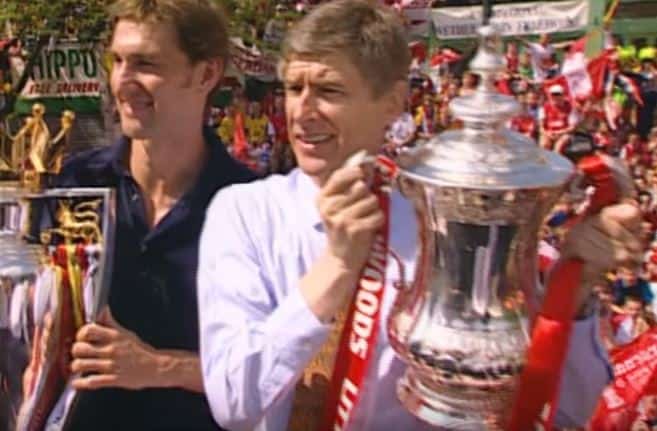 After 22 years at the helm of Arsenal FC, the Premiership’s longest current managerial reign is set to end this summer.

Arsène Wenger has confirmed he is set to retire at the end of the second season in a row which has seen Arsenal fail to finish in the top four.

On the North London club’s website, which said “Merci Arsène”, the veteran manager nicknamed “Le Professeur” when he joined Arsenal in October 1996, ushering in an era of beautiful football, made the following statement:

“After careful consideration and following discussions with the club, I feel it is the right time for me to step down at the end of the season.

“I am grateful for having had the privilege to serve the club for so many memorable years.

“I managed the club with full commitment and integrity.

“I want to thank the staff, the players, the Directors and the fans who make this club so special.

“I urge our fans to stand behind the team to finish on a high.

“To all the Arsenal lovers take care of the values of the club.

“My love and support for ever.”

Wenger is by far the club’s longest-serving manager and most successful in terms of major titles won. He will leave the club in May 2018 after revolutionising football in England in the late 1990s through the introduction of changes in discipline, training and diet of players, and ushering in an era of beautiful passing football.

Wenger has launched generations of stars into the Premiership too, such as Dennis Bergkamp Thierry Henry, Patrick Vieira and laterly, Pierre-Emerick Aubameyang.

Winning the double twice, the FA cup seven times, Wenger’s “Invincibles” had a record-breaking season undefeated and a run of 49 league games unbeaten came to an end with a 2–0 defeat at Manchester United on 24 October 2004

Club majority owner Stan Kroenke (blamed by many Gunners fans for the incredibly tight purse strings that Wenger had as manager) said: “This is one of the most difficult days we have ever had in all our years in sport. One of the main reasons we got involved with Arsenal was because of what Arsène has brought to the club on and off the pitch. His longevity and consistency over such a sustained period at the highest level of the game will never be matched.

“Arsène has unparalleled class and we will always be grateful to him. Everyone who loves Arsenal and everyone who loves football owes him a debt of gratitude. Three Premier League titles, including an entire season unbeaten, seven FA Cup triumphs and 20 successive years in the Champions League is an exceptional record. He has also transformed the identity of our club and of English football with his vision for how the game can be played.

“We have high ambitions to build on Arsène’s remarkable tenure and to honour his vision by ensuring that Arsenal competes for and wins the biggest and most important prizes in the game.

The present longest serving manager in all of English football will have lasted an astounding 22 years at Arsenal when he leaves in May, but in the past couple of years has had to contend with a growing resentment from a vocal minorty of fans of the “Wenger Out” campaign.

Putting his 22 years in perspective, his north London counterpart Mauricio Pochettino, the third longest serving manager in the Premier League has been at Spurs for under four years.

This makes 46 managerial casualties year in the English football leagues this year with 11 in the Premier League alone.

“There’s a reason why there’s so much affection from so many players and people who have worked with Arsène,” said Gazidis. “The reason is because he’s a special person.”

He added: “Arsene changed the game. He set a new standard. A new ambition. An ambition not just to win but to win while achieving perfection. To make art out of football.

In an emotive speech he continued: “He’s transformed the beautiful game and made Arsenal famous for the way we play. He’s inspired the people around him. He does this through his human qualities. He’s able to make people they can believe they can achieve great things.”

Gazidis thanked Wenger for leaving Arsenal in “a better place than we could have even imagined 22 years ago,” adding, “no words can describe this man. He loves the game and loves this club.”

He promised to give Wenger “the send-off he deserves” before beginning “the challenge of building on the platform he created.”