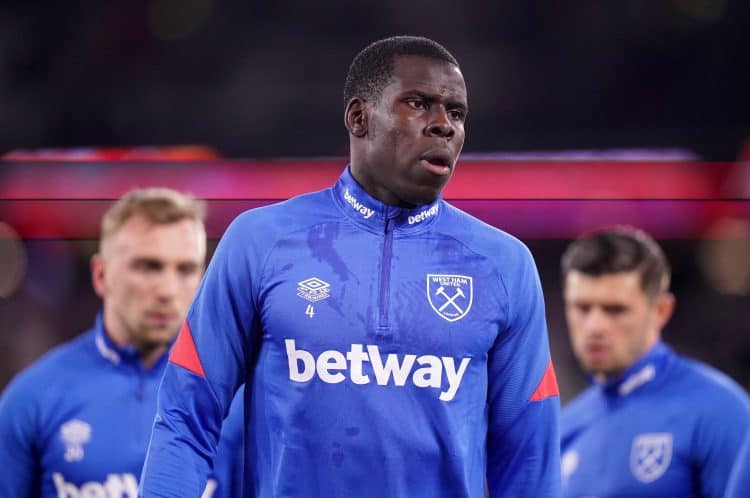 A petition calling for legal action to be taken against a Premier League footballer who kicked a cat has hit 100,000 signatures. It comes as a video of a cat on a pitch yesterday shows Zouma how to treat animals.

The West Ham defender has been widely condemned after a video emerged of him dropping, kicking and slapping his pet cat, and Essex Police have confirmed they are liaising with the RSPCA as part of their “urgent enquiries”.

While West Ham said they “unreservedly condemn” the actions of Zouma, who apologised for his actions, the player was selected by boss David Moyes in the starting line-up for Tuesday’s 1-0 win over Watford.

A petition on Change.org, started by Anti Animal Abuse, reads: “In the UK we have laws against the abuse of animals, laws which should be applicable to everyone rich or poor, famous or not!

“We ask that the Metropolitan Police and RSPCA carry out an urgent investigation and prosecute the perpetrators of this heinous act.

“Further we ask that the RSPCA remove all animals from Zouma’s ‘care’ immediately!

“Failure to take action in this case will send the message that animal abuse for entertainment is justified, that for the rich and famous breaking the law is no problem! Neither are acceptable!”

Experience Kissimmee, West Ham’s official destination partner, has said it “will be evaluating our relationship and sponsorship with the club” after Zouma was selected for Tuesday’s match.

A post by Experience Kissimmee on Twitter said: “It was disheartening to learn that the player Kurt Zouma was part of the starting line in West Ham United’s game. As we wait for further information from WHU, we will be evaluating our relationship and sponsorship with the club.”

West Ham’s statement on Zouma said they would be “dealing with the matter internally”, adding “we would like to make it clear that we in no way condone cruelty towards animals.”

After the Frenchman then played in the match against Watford – during which he was subject to boos and chants from the crowd – Moyes said: “The club have taken all the action they can do at the moment behind the scenes. My job is to pick the best team and Kurt was part of that.”

London Mayor Sadiq Khan gave his take on the matter, telling Sky News: “It’s despicable. I think a number of things need to happen urgently. I think the RSPCA and the police need to work together to prosecute this player.

“I’m disappointed in David Moyes and West Ham. I know how important three points are, but I think they should have shown leadership and dropped him last night.”

Packham told BBC Radio 4’s Today programme: “I think it was a disgraceful decision. I think if the footballer had released on social media a film of him taking drugs or beating his wife or his girlfriend or his children, there was no way he would have been on the pitch.

The RSPCA condemned the “very upsetting” video after it surfaced online and will be leading the investigation and co-operating with Essex Police.

“We cannot comment further at this time, but we’re grateful to everyone who has brought this to our attention,” a statement from the charity read.

“We have received lots of messages on social media and our other channels, so we’re urging people to only contact our national cruelty line (0300 1234 999) if they have new or first-hand information.”

While over in Sheffield a footballer showed some love for a cat that ran onto the pitch.

He showed how to care for a cat properly during a League One tie against Sheffield Wednesday.

After a brief chase he was able to rescue it and pick it up gently.