There were some ugly scenes inside the ground. 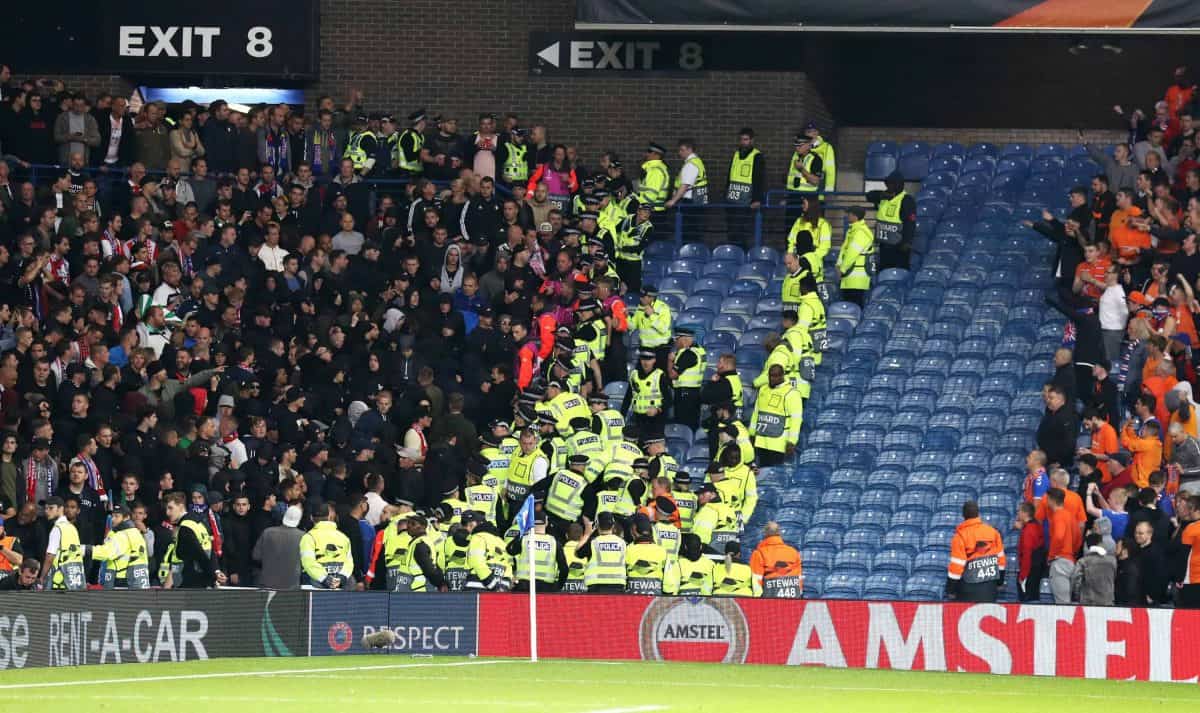 Police are investigating five incidents of assault on officers during the Rangers v Feyenoord Europa League match at Ibrox. It spoiled an evening where there was a touching tribute to, ex Gers captain, Fernando Ricksen who tragically passed away.

Trouble flared at half-time of Thursday night’s match, with fans in the away section clashing with police.

At least two supporters were removed from the section by officers, although Police Scotland have not confirmed any arrests.

A spokeswoman for Police Scotland told the PA news agency: “An investigation is under way after five incidents of police assault within the west stand of Ibrox stadium during the Rangers v Feyenoord match on September 19.

“Anyone with information or images of the incidents is asked to contact Police Scotland.”

Earlier in the day, a 22-year-old supporter was arrested in George Square, Glasgow, after a flare was set off.

Police escorted hundreds of Feyenoord fans as they marched to Ibrox ahead of kick off.

Away from the ugly scenes, Steven Gerrard believes Rangers gave Fernando Ricksen a fitting send off with a hard-fought 1-0 Europa League win over Feyenoord at Ibrox.

The death of the Gers’ former captain Fernando Ricksen on Wednesday at the age of 43 following a six-year battle with motor neurone disease made it an emotional night in Govan.

The Light Blues evoked the spirit of the Dutchman against the side from the Netherlands and after skipper James Tavernier had struck the outside of the post with a penalty, Ojo fired in a glorious drive from 20 yards in the 24th minute for what proved to be the winner.

Light Blues boss Gerrard said: “We gave the supporters a performance to be proud of.

“It has been an emotional 24 hours for everyone connected with the club so that put more pressure on the players.

“Everyone was looking for that performance for Fernando’s young family to be proud of and thankfully we got the win.

“I thought my players were outstanding, especially the first half.

“We carried the game plan out really well, to be aggressive, press on the front foot and try to take them to a place they are not used to going from a domestic point of view.

“I was slightly disappointed not to go in at the break further in front.

“Feyenoord improved in the second half but over the course of the 90 minutes I don’t think anyone can take the three point away from us, we deserved it, the fans were fantastic. It was very fitting.”