Ben Neil, 37, became a bilateral amputee and fulfilled his dream of walking down the aisle on his wedding day 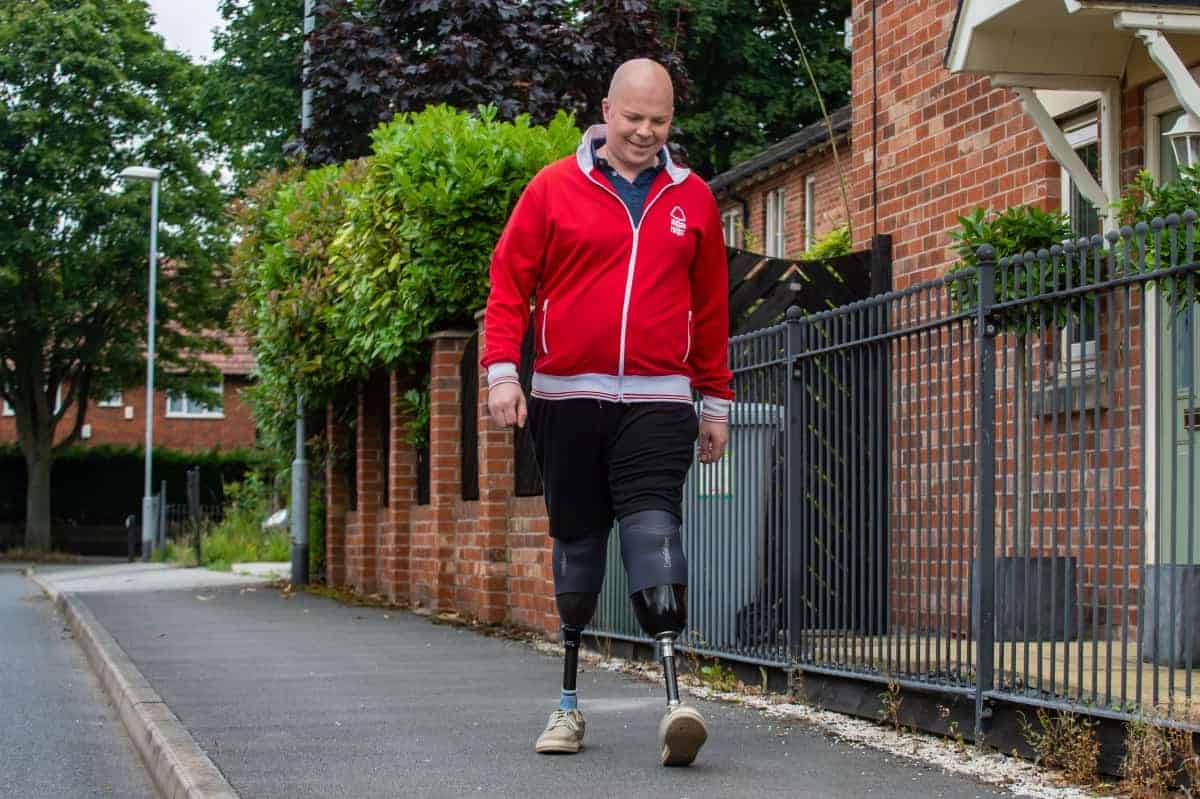 A diabetic football fan who could barely walk is back on his feet – after having both legs amputated.

Ben Neil, 37, was left virtually housebound due to complications with type 1 diabetes which he struggled with since his teens.

He was desperate to walk down the aisle at his wedding but doctors told him his legs were too weak.

So he took the drastic decision to have his right leg amputated below the knee and replaced by a prosthetic limb in September 2017.

Ben, an IT designer, fulfilled his dream and walked down the aisle and enjoyed his first dance when he married Kirsty, 31, last June.

Despite using a walking stick, Ben was forced to spend six months in hospital due to pressure on his left leg.

In May this year Ben went under the knife again at the Queen’s Medical Centre in Nottingham to have his remaining limb removed.

Ben, from Clipstone, Notts., said: “I never thought the only way I would walk again was to have my legs cut off but that’s exactly what’s happened.

“Now I walk better than I have for years and I’m getting used to my prosthetic limbs. It was a difficult decision but I haven’t looked back.”

Ben was a keen footballer and played for a Sunday League team but was forced to give it up his 20s as a result of his condition.

He said: “I developed lots of ulcers, and they can get infected which can get into the blood.

“I was housebound and had to give up work. I had to make a decision to stay as I am or do something about it.

“It’s a major decision to have a below-knee amputation. You are taking away part of your body.

“On the other side, I had in my mind that I don’t do as much as I can, and I was thinking of all the possibilities.

“Waking up without the leg was very surreal, very alien. It looked like something you would see in horror movies. It looked a bit fake, like CGI.

“I don’t get phantom limb syndrome as bad as some people, but if you have been walking for a bit you can feel the muscles in your feet and legs even though nothing is there.

“It was a goal to walk down the aisle with Kirsty on our wedding day. But it was a special day for everyone, I didn’t want it to be about me.

“I had a moment with my best man in the morning when I put my shoes on, and we both thought ‘he has made it’.”

Despite fulfilling his dream, his existing leg was put under immense pressure.

He added: “Using one prosthetic was putting a lot of pressure on my remaining leg. The pressure was more than the bones could handle.

“For six months in 2018 I was in hospital. I was saying ‘I can’t do this’. I decided I wanted another below-knee amputation. I almost had to fight for it.

“Now, I would say it’s looking like things are going to be a lot more manageable.

“I even managed to walk to my seat at the Nottingham Forest game on Saturday (3/8).

“Learning to walk again has been a challenge. I have been building up to the day I can walk again.

“I used to play football in the Sunday leagues before the complications started.”
Ben and Kirsty, who works in the public sector, are now planning to start trying for their first child.

Ben added: “Kirsty and I have been together for four-and-a-half years now and she’s been my rock all the way along this journey.

“We don’t have children. We wanted to get the operations out of the way. We want our own.

“I have got this project I am wanting to get involved in, doing my own literature for children regarding disabilities.

“I see children and they are intrigued by my metal legs. I want to get it out there that it’s normal and the impossible is possible.”

Kirsty said: “The first time Ben had his leg amputated I found it a lot harder because he had to learn how to walk almost from scratch but this time it’s been much easier.

“The first time it bothered me with people staring and driving into a disabled bay which felt a bit odd but now it’s just normal and we both hardly think about it.”