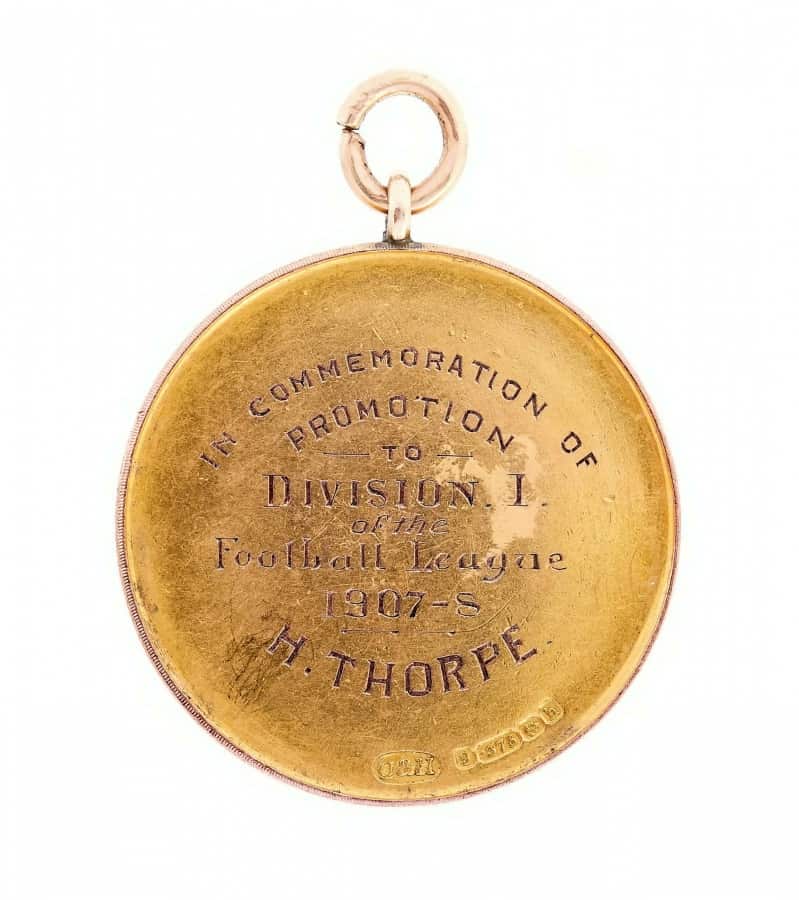 A extremely rare gold medal awarded to a tragic footballer who died after catching flu during a match in 1908 is tipped to fetch up to £5,000 at auction.

But during the triumphant season the defender contracted influenza during a match against local rivals Glossop in March 1908.

He never played again and he died six months later in September – shortly after collecting his league runners-up medal with his teammates.

“The club was founded in 1884 as Leicester Fosse because they played on a field by the Fosse Road. They moved to Filbert Street in 1891.

“In 1908, the club finished as Second Division runners-up and reached the First Division.

“Thorpe played a key role in that promotion season but sadly never got to celebrate with his team mates.

“It makes you wonder what the conditions must have been like and how cold it was when he played that match against Glossop in March 1908.

“He was a fit young man but antibiotics weren’t available back then to save his life.”

Thorpe was born in 1880 in the Derbyshire village of Barrow Hill, near Chesterfield.

He made his Football League debut in the 1900-01 season with Chesterfield and made
64 league appearances for them over the next few seasons.

He later moved to Woolwich Arsenal and played for Fulham in the Southern League before returning to the Football League in 1907 with Leicester Fosse.

He took part in their giant-killing FA Cup victory over Blackburn Rovers on January 11, 1908.

The owner of the medal, who wished to remain anonymous, said: “The medal was given to Harry’s brother, Reginald, after his passing in 1908.

“It was then handed down through generations of my family.

“I’m proud to think one of my ancestors was a talented footballer.

“I’d like to think Leicester City or a Leicester fan will buy this medal to honour Harry Thorpe’s contribution to the club’s history.”