The victim was the 15th teenager to be murdered in London since Christmas, 14 of whom were stabbed to death 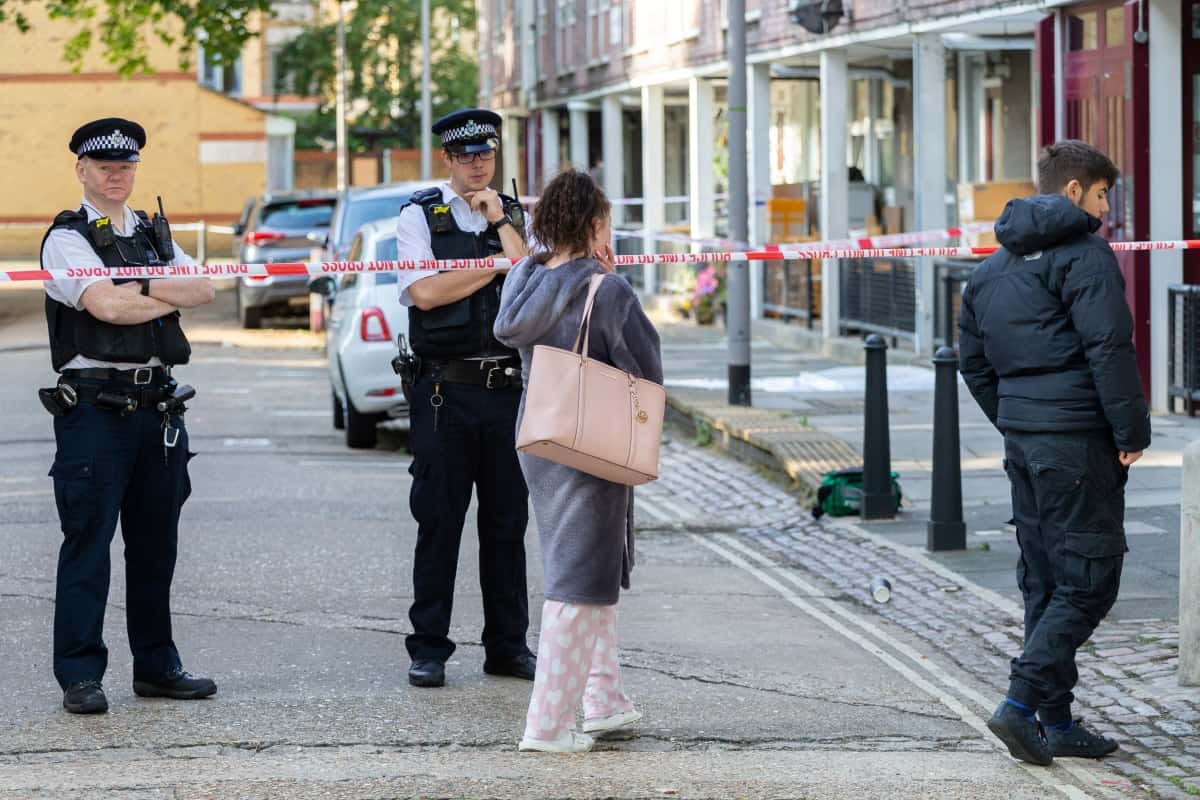 Horrified witnesses told how a gang armed with knives chased down a 16-year-old boy before stabbing him to death.

They described how the armed thugs jumped out of a car before hunting down the lad in Camden, north London, late last night.

The victim was pronounced dead at the scene, near Regent’s Park, just before midnight.

Tourists staying at a hotel nearby told of their shock after seeing London’s latest murder on the doorstep.

The victim was the 15th teenager to be murdered in London this year – 14 of whom have been fatally stabbed, and the 75th teenager to be killed in the capital since Sadiq Khan was elected Mayor just three years ago.

A local resident said a car pulled up and the attackers jumped out, chased the victim and stabbed him before speeding off in the same vehicle just after 11pm last night.

The roads surrounding the murder scene at Munster Square remained cordoned off this morning .

A cafe attendant, who works near the scene, said: “The car just pulled up, people jumped out and chased him through the estate.

“They stabbed him and then drove off.”

Tourists staying at the four-star Melia White House Hotel, just yards from the scene, told of their shock.

Jose Blanco, 20, a student from the Dominican Republic who is staying at the hotel with his family, said: “I had heard about rising crime in London on the news, but I didn’t expect someone to be killed next to my hotel.”

Nei Barbosa, 48, from Paraná in Brazil, is staying at the hotel on his first visit to London with his partner Carla.

He said: “We thought that London was extremely safe.

“I can’t believe someone was killed just outside our hotel.

“We will definitely be very careful for the rest of our stay.”

Doug Paterson, 61 from Aberdeen in Scotland, was staying at his friend’s apartment opposite the hotel when he went out on to the balcony for a cigarette.

He said: “I saw three men running down the road below between 11pm and midnight yesterday.

“They were running together and looked suspicious. They were shouting amongst themselves.

“One was wearing a black tracksuit and another a grey tracksuit. I can’t remember what the other had on.”

He added: “It’s frightening. They will stab you for a cigarette and then go home to play on their Xbox like nothing happened.”

A construction manager, 52, who was working in Regent’s Place opposite the hotel, said: “Come on Boris, sort it out!

“We have been too weak for too long.

“I say bring it on to stop and search. People say it’s racist, but if you are not carrying anything you’ve got nothing to worry about.”

“It’s just kids killing kids. They don’t think about how it will affect their families.

“Look around you: there’s a Lamborghini right there, with a nice hotel and fancy apartments next to it. A boy was stabbed nearby.

“It’s symbolic. Kids don’t want to work these days. They listen to songs and want to get rich quick by doing terrible things.”

A Met Police spokeswoman said: “A murder investigation is underway following a stabbing in Camden.

“Police were called at around 11.10pm on Monday to reports of a male stabbed in Munster Square.

“Officers and paramedics attended and the 16-year-old was pronounced dead at the scene. A crime scene remains in place.”

She added: “There have been no arrests.

“Enquiries into the circumstances remain ongoing.”

January 8th: Jaden Moodie, 14, stabbed to death after being knocked off a moped in Leyton,east London

June 26th: Yusuf Mohamed, 18, stabbed to death outside a greengrocers in Shepherd’s Bush. Two 17-year-olds have been charged with his murder

June 30th: Amara Toure, 18, of Manor Park, died in hospital after being stabbed in Walworth

July 11th: Kye Manning, 19, stabbed to death and another two teens slashed during a running brawl through the centre of Purley