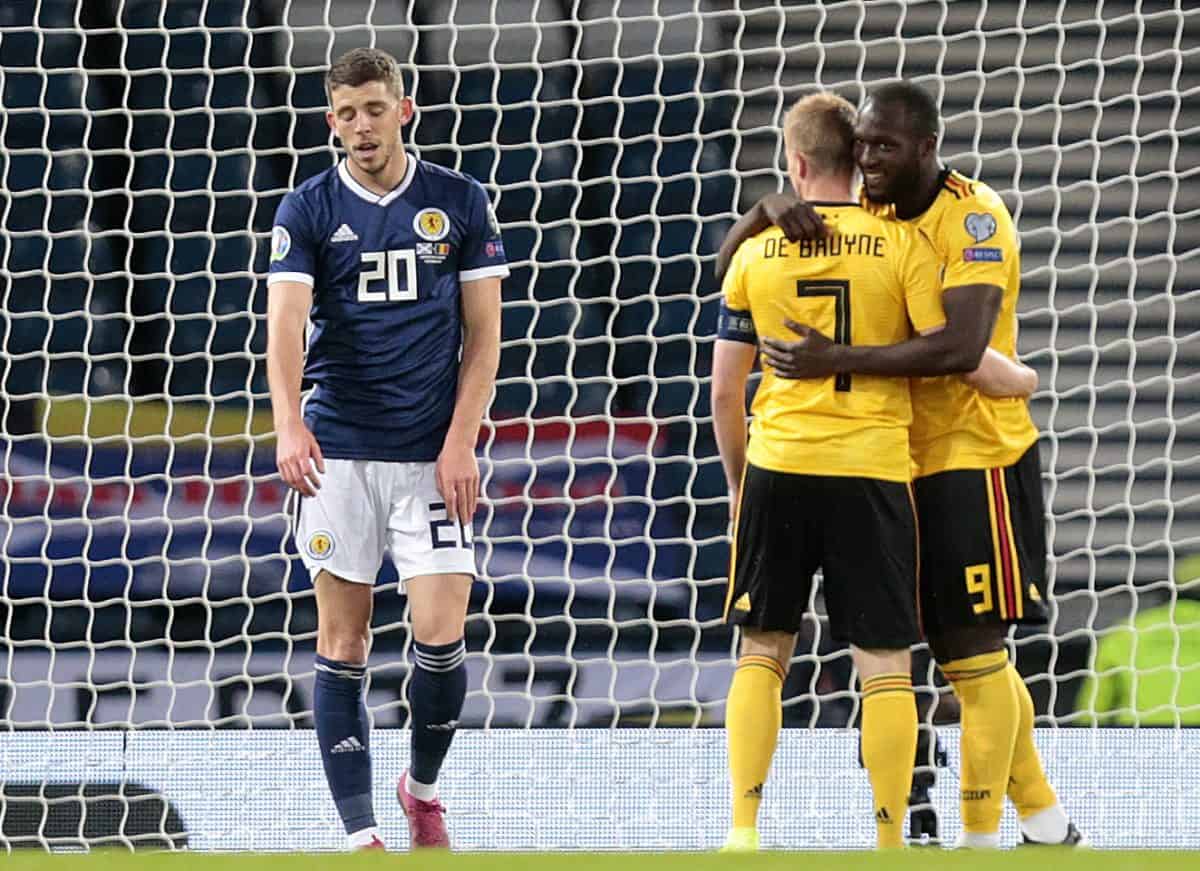 Scotland manager Steve Clarke set his players the target of finishing third and going into the Euro 2020 play-offs with confidence after admitting their automatic qualification hopes had died.

A 4-0 home defeat by Belgium made it four defeats from six qualifiers and saw Scotland drop to fifth place in Group I, nine points off second-placed Russia and one behind both Kazakhstan and Cyprus.

“It doesn’t look good where we are in the table now. There’s 12 points up for grabs and we have to make sure we finish third in the group, in terms of rankings and seedings.

“And if we finish third it will mean we have performed well, which should give us confidence going into the play-off games in March.”

He set up first-half goals for Romelu Lukaku, Thomas Vermaelen and Toby Alderweireld as the visitors ruthlessly punished errors by Steve Clarke’s side in their 2020 European Championship qualifier.

The Manchester City attacker curled in a fourth with consummate ease in the 82nd minute to leave Scotland relying on March’s Nations League play-offs for their chance to make the Euro finals next summer. View this post on Instagram

FULL TIME | Scotland 0 – 4 Belgium It was a tough night for Scotland at Hampden as Belgium put four past us.

Celtic’s attacking midfielder Christie was impressed by De Bruyne’s performance and said: “He is a class act.

“These are the kind of players that I aspire to. He is in a similar position to me.

“The positions he picks up and the way he hurts teams and his finishing as well.

“The ball in for their second goal was frightening and his finish for the fourth is pretty impressive as well. View this post on Instagram

“It is good for me. I want to test myself against the best teams in the world so it is a learning experience for me so hopefully I learn from it and move on.”

After losing 2-1 at home to Russia on Friday night, the defeat was Scotland’s fourth out of six in Group I which leaves them in fifth place, above minnows San Marino who are bottom and without a point.

Clarke’s side have four games remaining, Russia away and San Marino at home next month, before Cyprus away and Kazakhstan at Hampden Park in November.

Christie insists he is still confident of Scotland qualifying for a major tournament for the first time since 1998.

The former Inverness attacker said: “Going into it (the campaign) we had the play-offs as a fall-back, we didn’t want to have to use it but it looks like we’re going to have to if we’re going to make it there.

“Obviously they were two very disappointing results but even after that, we still feel close as a group.

“We have taken more of the manager’s ideas on board.

“I know it sounds daft getting beat 4-0 at home but I think there are a few positives we can take from that.

“It is the minor things that cost you at this level in football, especially against a team like Belgium.

“They scored in their first counter attack. It is so tough to nullify and the quality they have when they go forward is outstanding.

“That is the level we are trying to get to.

“We have four games left in the group to finish as high as we can and take that into the play-off.”