Regarded as one of the game's greatest in his position, Banks was named Fifa goalkeeper of the year six times and earned 73 caps for England. 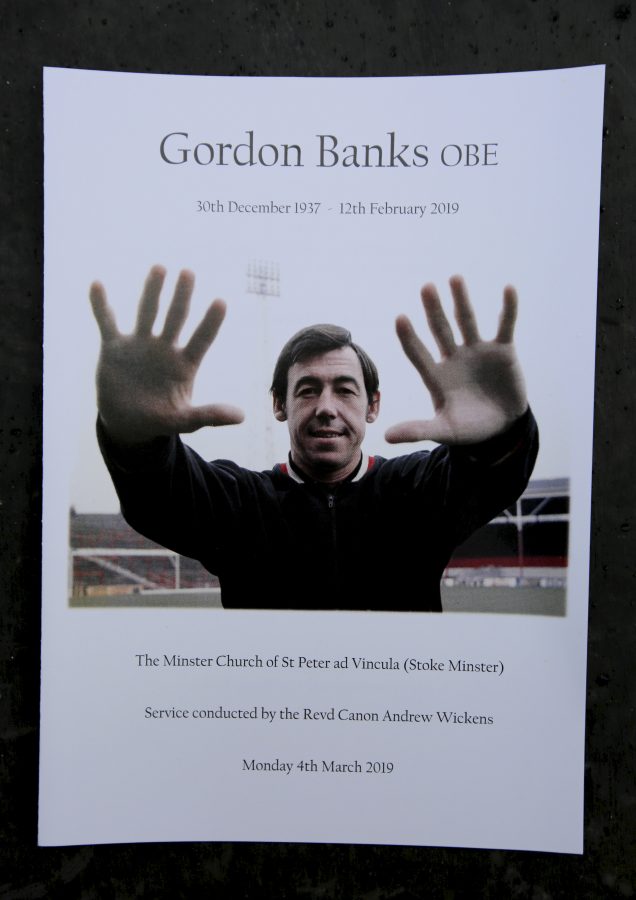 Over 2,000 people lined the streets of Stoke-on-Trent to pay their respects ahead of an emotional service to celebrate the life of one of the best goalkeepers of all time.

Former England stars were among the congregation at Stoke Minster along with other famous faces from the world of football.

The cortege passed through the bet365 Stadium before his coffin was carried in to the church by goalkeepers from four different teams he represented during his career.

A guard of honour featuring Stoke City players past and present led by captain Ryan Shawcross was formed at the club’s ground, where fans watched the service on a big screen.

Supporters gathered in the stands chanted “England’s number one” as the five-car cortege passed through the stadium to loud applause.

At the church, famous goalies such as David Seaman, Peter Shilton, Ray Clemence and Pat Jennings gathered for the invitation-only ceremony.

Former England legends from the 1966 squad were also in attendance such as hat-trick hero Sir Geoff Hurst, Roger Hunt as well as Jack and Bobby Chalrton.

Members of the British Army also formed their own guard of honour to mark Banks’ service in the Royal Corps of Signals before his football career.

Tributes were then led by Geoff Hurst and Stoke City chairman Peter Coates during the emotional service ahead of a private burial with close friends and family.

The funeral was held on the 47th anniversary of Stoke City’s League Cup final victory over Chelsea in which he played in 1972.

Sheffield-born Banks died on February 12 at the age of 81 following a long battle with cancer.

He made 510 league appearances for Chesterfield, Leicester and Stoke and was part of the England World Cup winning side which beat West Germany 4-2 at Wembley in 1966.

He was capped 73 for his country and will be best remembered for his wonder save against Brazil at the 1970 World Cup when he tipped a Pele header over the bar.

During his career he was named Fifa goalkeeper of the year on six occasions and won the League Cup twice, with Leicester in 1964 and Stoke in 1972.

Banks is survived by his wife Ursula, who he met on national service in Germany in 1955, and their three children Julia, Robert and Wendy.