Let’s be honest, England’s kit for the World Cup is decidedly average. It looks like nothing more than a generic white Nike sports shirt with an England badge on. You’re better off saving your £60 for a flutter on the tournament. But, just as on the field, we’re used to kit disappointment by now aren’t […] 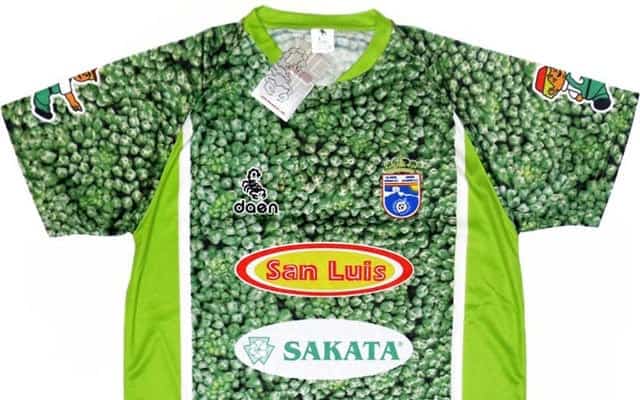 Let’s be honest, England’s kit for the World Cup is decidedly average. It looks like nothing more than a generic white Nike sports shirt with an England badge on. You’re better off saving your £60 for a flutter on the tournament. But, just as on the field, we’re used to kit disappointment by now aren’t we? Have we had a decent England shirt since the one sported by Glenn Hoddle’s side at France 98? (Make yourself feel old by reflecting on the fact that that was 20 years ago!).

Just as the sporting excitement is likely to be found by watching other teams at this year’s tournament, the best kits are likely to be sported by our rivals too. So, whether you’re a wannabe football hipster aching to add an obscure kit to your collection or you’re just a fan of the weird and wonderful styles thrown up by the World Cup, what should you look out for this summer?

Not content with being incredibly good on the field – and one of the bookies’ favourites to win the tournament – Die Mannschaft had to go and blow everyone out of the water with their kit too didn’t they? The home kit for Russia is based on the classic Italia 90 kit – the one England fans have only really seen through tear-filled eyes over the years as they look back on what might’ve been in THAT semi-final penalty shootout. This version offers a modern, monochrome upgrade on that shirt and is certainly a kit deserving of the reigning champions. The away kit is inspired by the same era and isn’t bad either.

However, if World Cups were handed out for the popularity of the kit then the tournament would be over already and Nigeria would have the trophy safely tucked away. That’s because three million people pre-ordered the replica home shirt according to the Nigeria Football Federation. In London, there were queues spilling out of Nike’s flagship store on the day of release too with fans desperate to get their hands on the shirt. So, what’s all the fuss about? According to Nike it’s a ‘subtle homage to Nigeria’s 94 shirt, with its eagle wing-inspired black-and-white sleeve and green torso’ and there’s no denying the fact that it’s the most striking kit on show at the tournament, standing out from a crowd of boring ‘safe’ options.

Just the words ‘Panama away kit’ sound like they should belong to the wardrobe of an arch football hipster, right? Aside from the cool value attached to the fact that this is Panama’s first World Cup appearance, the away shirt is actually a decent looking too. This New Balance design uses blue chevrons that are supposedly inspired by the Panama City skyline and the Harpy Eagle, Panama’s national bird. Inside the collar you’ll see the slogan ‘Alcanzamos por fin la victoria’ (‘we finally reached victory’, which features in the national anthem). ‘Fun’ facts to tell your mates surely? The group odds on williamhill.com suggest Panama will be getting an early flight home, so catch it while you can.

The World Cup should be a colourful occasion – in both a sporting and a sartorial sense. With no Holland this time for a dash of orange, it falls on the likes of Colombia and Brazil to brighten things up a little. Like the German effort, the Colombia home strip is heavily inspired by the team’s Italia 90 kit (think Carlos Valderrama and co) and features flashes of red and blue on a bold yellow shirt for a modern take on a retro classic. Navy shoulder stripes and red socks complete a strong look for Los Cafeteros.

Dark horses for the @FIFAWorldCup? Just putting it out there. pic.twitter.com/Ww6oW4GUBH