Nigel Winterburn believes Granit Xhaka should apologise to the Arsenal fans after telling them to “f*** off” when substituted against Crystal Palace. 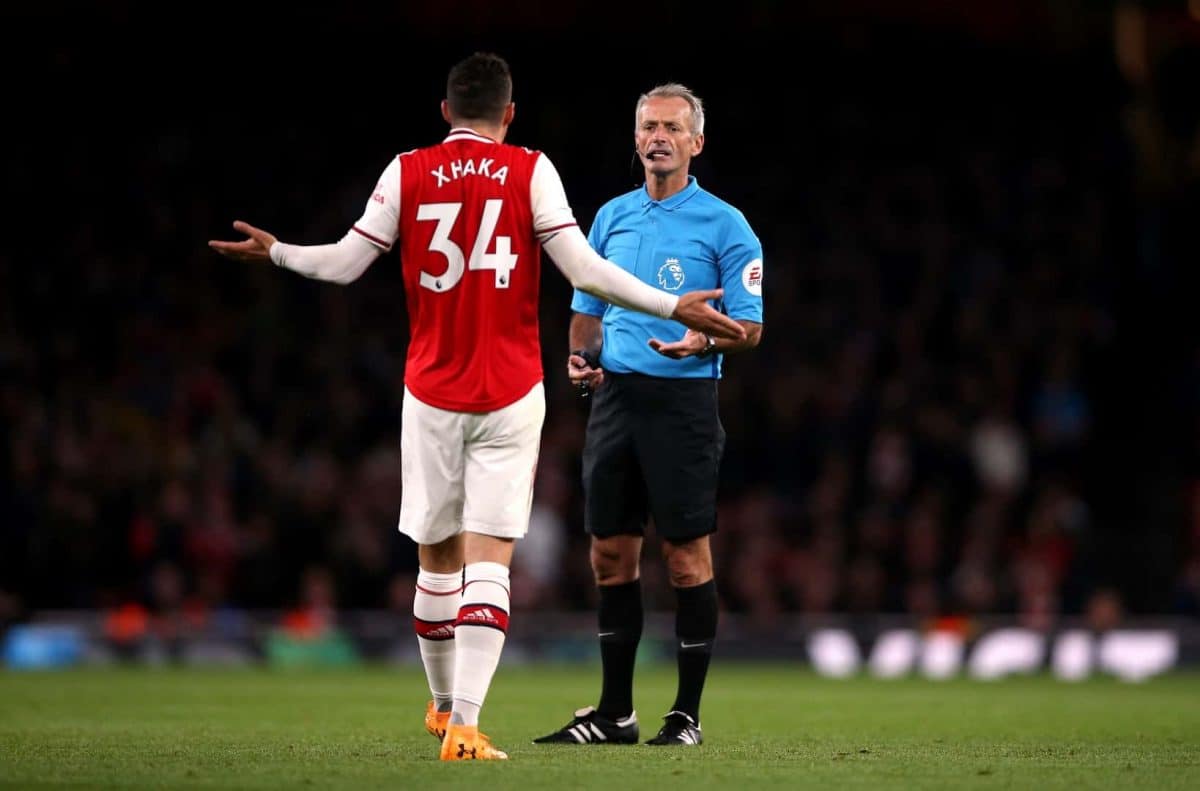 Former Arsenal defender Nigel Winterburn warned the team’s manager Unai Emery he has no choice but to take the captaincy off Granit Xhaka, who should apologise to the fans for his behaviour at the Emirates.

The 27-year-old midfielder told Gunners supporters to “f*** off” as they reacted to his substitution during Sunday’s 2-2 Premier League draw at home to Crystal Palace.

Arsenal had been two up after goals from Sokratis Papastathopoulos and David Luiz, but squandered their early lead with Crystal Palace goals from Luka Milivojevic’s spot-kick and Jordan Ayew’s second-half header.

Gunners boss Emery made the decision to replace Xhaka in the 61st minute – nine minutes after Palace had made it 2-2 – and it was sarcastically cheered by the home supporters before that turned to jeers as he took his time to leave the pitch.

This saw the Switzerland international, who is one of five captains at the club, wave his arms and cup his ears before he mouthed expletives to the crowd and decided to take off his shirt and head straight down the tunnel. Xhaka had thrown the captain’s arm band at team-mate Aubameyang who had to pick it up off the ground and also pushed away a handshake from Unai Emery.

Reacting to the unprecedented breakdown between club captain and fans, Winterburn told talkSPORT: “I think Unai Emery needs to take Xhaka out of the firing line in terms of the captaincy. He has five captains so he can easily do that.

“If he backs Xhaka, he will realise what supporting Arsenal Football Club is all about because if the supporters don’t agree with him – and they obviously don’t agree with Xhaka being captain at the moment – then the manager himself will come under increasing pressure.

“It has put Unai Emery in a very difficult situation. He has to deal with it very, very quickly. He can’t let it linger on.

“We have to move forward and concentrate on the football. Deal with it today or tomorrow, get the statement out and we can move on very quickly.”

During his 13 years at Arsenal, Winterburn admitted he felt the wrath of the Gunners fans at times, but said the best way to get them back on side was with consistent performances.

He did offer Xhaka a small crumb of comfort by reflecting on a time when right-back Hector Bellerin was booed by his own supporters – coincidentally during a league fixture with Palace in April 2017.

The Spanish defender did not react and soon won over the fanbase again.

“I can’t remember Tony Adams doing that, but he was such a fantastic captain I can’t even remember him being substituted,” Winterburn admitted.

“A lot of us have been substituted and been very disappointed, I have sat down and slapped water on the ground in frustration, but more in frustration at myself and the level of my performance not being good enough.

“I hope there is an apology because Xhaka needs to realise the supporters are the ones who adore Arsenal FC. They are so passionate about this club.

“Some years ago there was frustration around Bellerin, but there was no reaction from him and he got on with his performances and in the end the crowd were back on side.

“Now they are clambering for him to come back in the team again after his injury, so you have to be mentally strong.

“You have to say ‘right, next time I play I’ll show why I am in the team’. But it will be difficult for the manager now and Xhaka because there will be a big clamour for the captaincy to be taken away from him.”

Earlier, another Arsenal legend warned Xhaka “should have apologised already.” The former striker said “that’s not captain’s behaviour,” and warned him that Arsenal fans had “already shown a lot of patience with his performance.”

Unai Emery insists he will talk to Granit Xhaka before deciding whether to strip him of the Arsenal captaincy after the midfielder swore at his own fans.

Xhaka’s antics will now dominate the coming days for Arsenal and – as he admitted the Switzerland international acted incorrectly – Emery said he would hold talks before deciding whether to appoint a new skipper.

“Now we need to stay calm and speak with him, to speak inside about that reaction. His reaction was wrong in that moment.

“We are here because we have supporters. We are the workers inside, but we play for them. We need to have a lot of respect from them, through applause and criticism.

Despite the incident, Arsenal will still feel aggrieved not to have taken all three points as Sokratis saw a late second goal chalked off by the VAR for a foul by Calum Chambers.

While Emery was unhappy with the call, Eagles boss Roy Hodgson praised referee Martin Atkinson and the use of the VAR to have earlier awarded the visitors their penalty.

“I’m pretty certain Martin is pretty comfortable with the VAR decision,” he said.

“His spur-of-the-moment decision turned out to be the wrong one and I’m certain he’s man enough to accept that and be glad that it got overturned and the right decision was made.

“Their second goal was a clear push on James McArthur so we could have been sitting here having lost 2-0 saying that goal should have been disallowed.

“I could have been complaining bitterly that the referee was relatively kind to Arsenal for allowing the rugby tackle and allowing the player to stay on the field.”