Kitty Thorne, 103, could be Britain’s oldest female football fan, and has followed her team since 1954 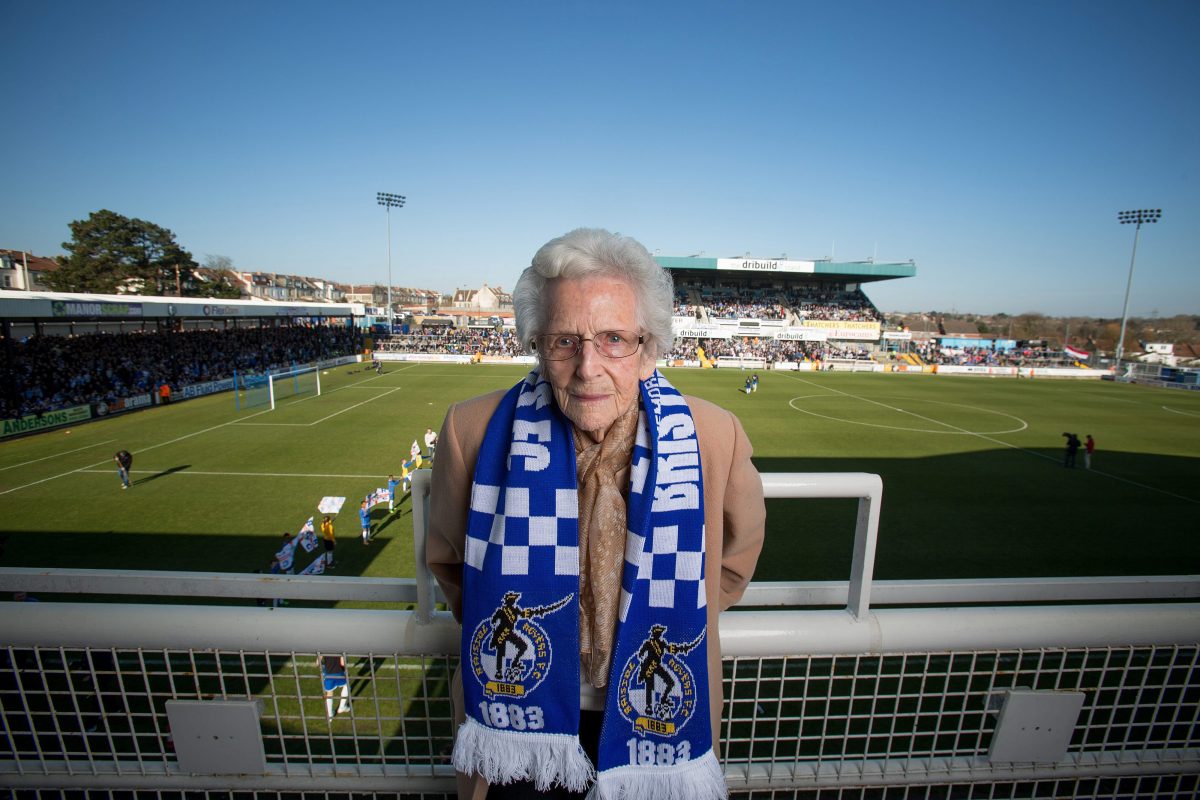 A 104-year-old Bristol Rovers fan who used  to every home match – after arriving at her first by steam train, has sadly passed away.

Kitty Thorne, 104, could well have been Britain’s oldest female football fan, and had followed her team since 1954.

He said: “It comes as very sad news to me that my friend and proud Gashead, Kitty Thorne, has passed away.”

She was so dedicated to the League One team that she could not bring herself to watch their die-hard rivals, Bristol City, beat Manchester United 3-1. Kitty, who lived in Trowbridge, Wilts, used to head off on the lunchtime train to Stapleton Road, east Bristol, with a packed lunch of corned beef sandwiches and a flask of tea.

She had recalled a memorable match watching the Gas clash with Manchester United nearly 50 years ago.

“It was 1972 and we were playing Man United in the League Cup,” Kitty said.

“I went to the match, but I wasn’t feeling very well.

“We were all packed in really tight at Eastville for the match – there were more than 34,000 in attendance – and so to get to the St John’s Ambulance people at the front I was carried over everyone’s head.

“Once I got to the front they looked at me and I felt a bit better, so they sat me on a bench to watch the rest of the match.

“The bench was in front of all the crowds almost on the edge of the pitch.

“I had a front row seat for Manchester United.”

She added: “We used to go by steam engine.

“I remember one game when they were shaking buckets in the crowd. I didn’t know what it was for, but then found out it was to pay the players and to pay for the match.”

Kitty has seen 25 managers come and go since she started supporting Rovers in the 1950s, and celebrated her 100th birthday at the Memorial Stadium, Filton, Bristol.

She met manager Darrell Clarke, and described him as “very nice.” Despite her age she regularly attended home matches with her son Pete, 73.

They had been going to the football together for nearly 65 years, after Kitty’s late husband Les first suggested going, despite being a Tottenham Hotspurs fan.

Kitty said: “The atmosphere is good, that’s my favourite part. We’ve made a lot of friends over the years.

“But it’s not the same in recent years though, there is something missing. A lot of the people who knew us have gone.

“And the crowd are not as raucous as it used to be, but I still love going.”
She said that the biggest changes she has seen over the years is the money surrounding football. “The money – I think it’s got a bit out of hand, but that’s how things are these days I suppose.”

She added: “Occasionally we watch some of the games on TV, but never Bristol City.
“I like to watch when the scores come up to check if City have lost.”

“No way, I just love the atmosphere too much,” she said.