Bradford have sacked manager Stuart McCall after six successive defeats in all competitions. The 53-year-old former Bradford player was in his second spell at Valley Parade and led the Bantams to last season’s League One play-off final, a match they lost 1-0 to Millwall at Wembley. Bradford look set for a top-six finish, even after […] 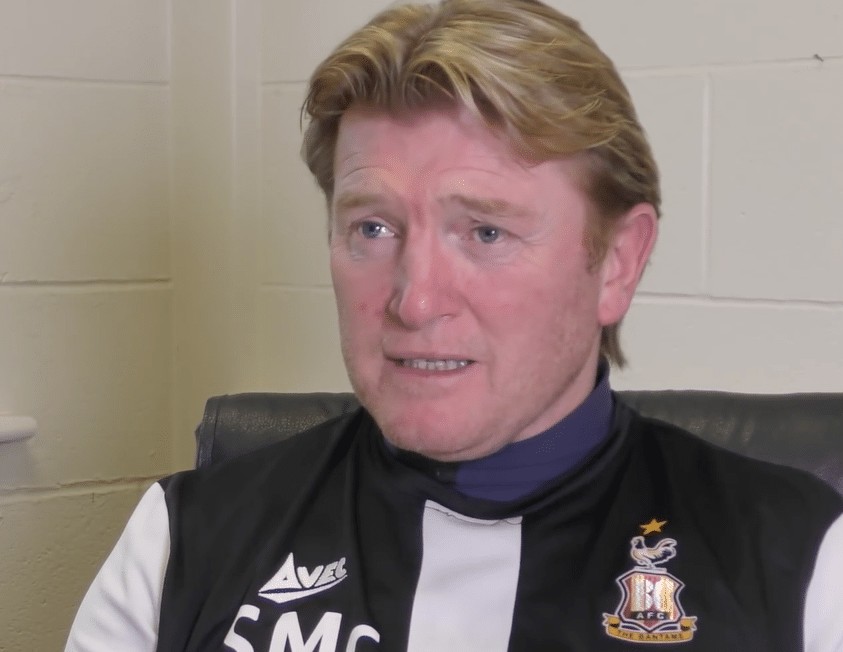 Bradford have sacked manager Stuart McCall after six successive defeats in all competitions. The 53-year-old former Bradford player was in his second spell at Valley Parade and led the Bantams to last season’s League One play-off final, a match they lost 1-0 to Millwall at Wembley.

Bradford look set for a top-six finish, even after a dismal run capped by a loss to calamitous Oldham on the weekend.

Last season the West Yorkshire team were unbeaten at home all season, but this season they have faced eight home losses.

McCall played 395 games as a player at the club and 203 games as manager.

And his record as a player in England and Scotland was equally glittering, perhaps capped with this famous clip of him drunkenly falling off a car celebrating helping Motherwell get into the Champions League.

The decision to sack him will not rest easy with many fans as despite the terrible recent run there has been no clamour to get rid of McCall on the stands.

With limited responsibility for team recruiting many see the sacking of McCall as a PR disaster, making replacing him a lot more difficult.

Former Leeds manager Simon Grayson – also linked with a return to Leeds United after the sacking of Thomas Christiansen – will be being eyed by Bradford too. Grayson has won four promotions up to the Championship as manager.

“Bradford City can confirm that the club has terminated the contract of manager Stuart McCall,” said a club statement today.

“This decision has not been taken lightly, and this is a sad day for everyone involved. We would like to place on record our sincere thanks to Stuart, who joined the club at a difficult time and restored the fans’ belief when the odds were much against us. Unfortunately, we have now suffered six straight defeats and the last two fixtures in particular have not brought about the positive change in performances or results that we all hoped for.

“We believe that our current squad is capable of performing to a much higher standard than we have seen recently. We must all accept responsibility for the recent poor run of form, including our players who now have the opportunity to put it right. As such, we believe that a change is in the best interests of the club at this time in order to give us the best chance of finishing the season strongly.”

Bradford’s next match is bottom of the table Bury at Valley Parade on Saturday.

McCall’s sacking means there have now been 28 changes of manager in the top four English leagues this season.

Leeds are now looking for their seventh manager since 2014.

Former England boss Steve McClaren was quick to rule himself out of contention for the job, leaving few contenders still in the running.