With speculation that Nigel Farage may be awarded a knighthood emerging, Neville again spoke out again about the dangerous effects on society when “the highest office in the country” expresses racist views. 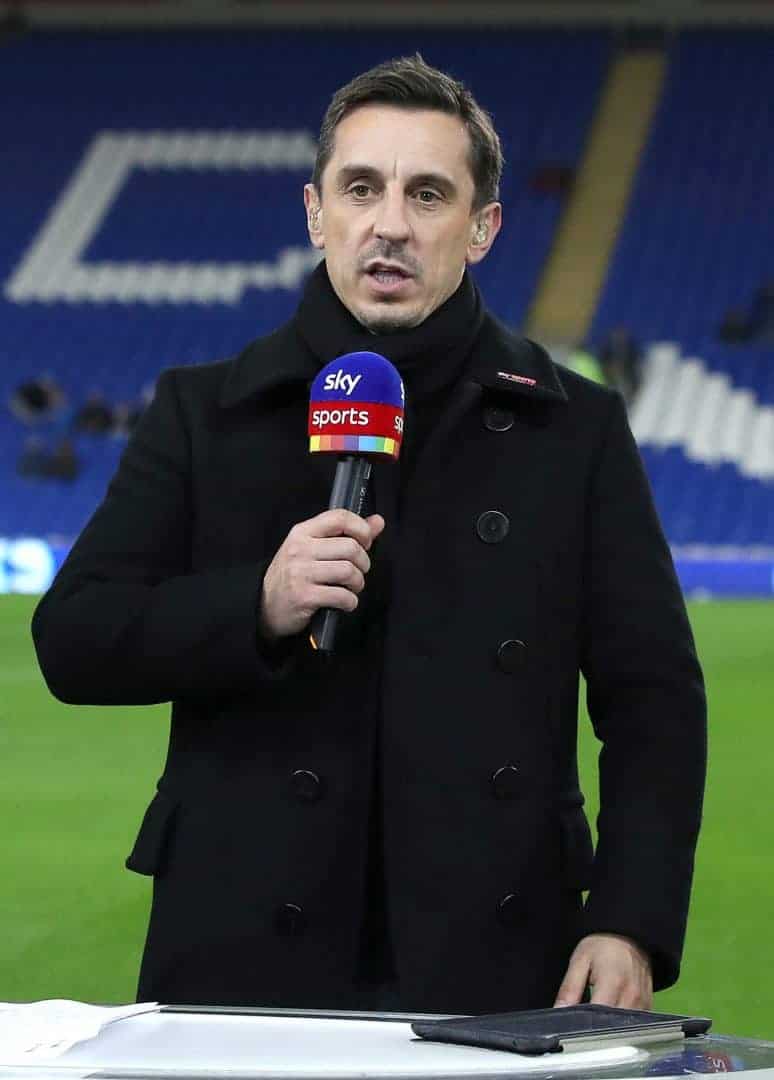 Sky Sports host David Jones has apologised for “spoiling” the discussion of alleged racism that marred Chelsea’s 2-0 victory over Tottenham on Sunday.

Chelsea defender Antonio Rudiger said he was the subject of racial abuse from a Spurs fan during the second half of the match.

In a blistering outburst that was praised by many on social media, on Sky Sports after the contest, Gary Neville said the Premier League had much to answer for and hides behind the Football Association when it comes to dealing with racism on the terraces.

Before the election Gary Neville made headlines by calling out Boris Johnson’s racism and explaining the effect it has on the country when the Prime Minister can be racist with impunity.

With speculation that Nigel Farage may be awarded a knighthood emerging, Neville again spoke out again about the dangerous effects on society when “the highest office in the country” expresses racist views.

In an impassioned plea following the clash, former England defender and Sky Sports pundit Gary Neville said players should walk off the pitch if they heard racism emanating from the crowd.

The ex-Manchester United star pointed the finger at Britain’s two main political parties, the Conservatives and Labour, for allowing racism to prosper in their own ranks.

Boris Johnson’s Tories have been dogged by constant allegations of Islamophobia and other forms of racism in recent years, had three candidates accused of anti-Semitism running in the election and Johnsons himself has made many racist statements over the years. Labour too has struggled to purge its membership of those accused of being anti-Semitic.

“I mentioned it a couple of weeks ago that we have just had a General Election in this country where the leaders of both main parties are accused constantly over the past month of fuelling racism and accepting racism in their parties,” Neville said.

“If it is accepted in the highest office in the country then we aren’t talking at a micro level, we are talking at an enormous level.

“It is the same here today, which you could say is down to one individual person but it is a far bigger problem than that and something needs to happen quickly.

“Ultimately we need to empower the players to walk off the pitch and stop the entertainment while it is happening.”

David Jones then intervened with a disclaimer: “I am compelled to say that those are the opinions of Gary Neville and not Sky Sports. That is my duty.”

When a visibly annoyed Neville asked whether or not he agreed, Jones responded: “Whether I do or I don’t is irrelevant. I’m here to try and hold a balanced debate.”

After the programme, Jones tweeted an apology.

“I’m so sorry to have spoiled what was such an important discussion on racism tonight. I had to intervene when Gary suggested the two main political parties were to blame – I didn’t make that clear enough. For that I apologise unreservedly,” Jones said.

“I would never purposefully shut down a discussion on racism. I’ve worked for Sky for over 20 years and know they share my view that racism of any kind should not be tolerated. That is not a debate. And that’s why I’m so very disappointed and sorry tonight.”

Sport Minister Nigel Adams is set to meet with Tottenham directors on Monday to discuss the incident.

Calls have been made for the Government to open an investigation into racism in football after the ugly scenes that marred the Premier League clash.

The demand for a probe came following Tottenham Hotspur and Chelsea’s derby match in which allegations were made that racist abuse was directed at a black player.

Spurs have vowed to investigate after Chelsea defender Antonio Rudiger reported being targeted with monkey chants during the second half of his team’s 2-0 win at the Tottenham Hotspur stadium.

The Professional Footballers Association (PFA) said it was “dismayed and disgusted” at the claims of abuse in north London and pushed for a Government inquiry.

“The PFA calls for a government inquiry into racism and the rise in hate crime within football, and immediate and urgent action,” said the representative body.

Sports Minister Nigel Adams confirmed he would be meeting with the club on Monday.

“I welcome Spurs investigation and will be speaking with the club’s directors tomorrow.

“There is no place for racism or any kind of discrimination in football or anywhere else.”

Labour said Premier League football clubs that failed to weed out racist fans should have to play at empty grounds.

“If clubs don’t find perpetrators they should play matches behind closed doors.”

Tottenham MP David Lammy – tipped to run in the upcoming Labour leadership contest – said he was “appalled to hear about racist incidents by Spurs fans” and urged for the culprits to be “punished”.

After the incident was reported to referee Anthony Taylor, an announcement was read out three times via the stadium Tannoy stating that “racist behaviour among spectators is interfering with the game”.

He tweeted: “I fully agree with @GNev2. The Premier League and FA have to start taking more effective action against home grown racism at matches in this country.

“We thought we had largely eradicated this scourge but there have been too many new incidences taking place in recent games.”

A spokesman for Tottenham Hotspur said: “Any form of racism is completely unacceptable and will not be tolerated in our stadium.”

The club said it would take the “strongest possible action” against fans found to have engaged in abuse, including bans from the newly-built £1 billion stadium.

The Department for Digital, Media, Culture and Sport has been contacted for comment.

Following scenes of racist chanting when England played Bulgaria in a World Cup qualifier overseas, Prime Minister branded the culprits “vile” and said such behaviour had “no place in football or anywhere else”.