These fascinating photos show football fans across the country whose jobs are also their teams’ nicknames – with many of the trades now dying out. The footy fans and their careers are a lasting legacy of the working class routes of the English Football League – which is ending this weekend. There is a pottery […] 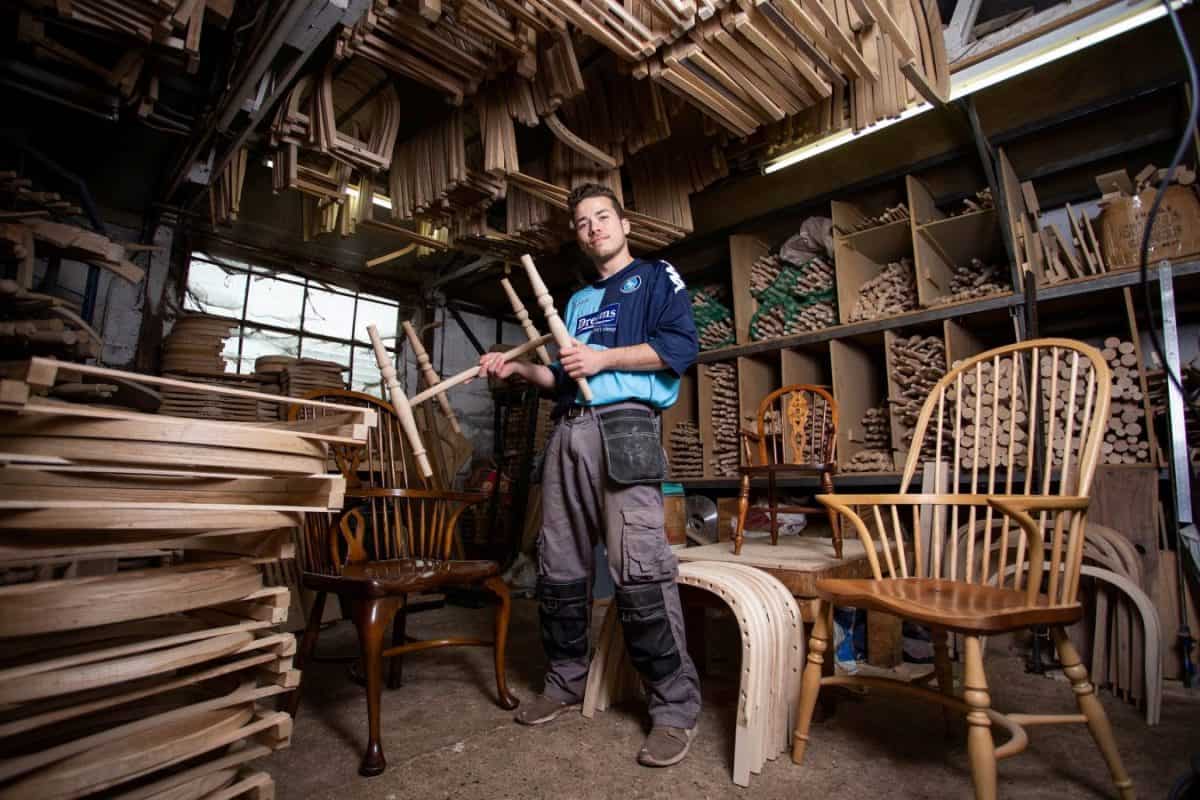 These fascinating photos show football fans across the country whose jobs are also their teams’ nicknames – with many of the trades now dying out.

The footy fans and their careers are a lasting legacy of the working class routes of the English Football League – which is ending this weekend.

There is a pottery maker in Stoke-on-Trent where Championship side Stoke – The Potters – play.

There is specialist knife maker in Sheffield, where both local Championship clubs have been nicknamed The Blades during different eras.

Also seen is a master saddle maker in the town of Walsall, where the football team is nicknamed The Saddlers, and of course the famous Tractor Boys of Ipswich.

It also includes a fish supplier and restaurateur in Fleetwood, home of League One club The Fishermen.

The EFL – comprised of The Championship, League One and League Two – was founded 131 years ago.

The season ends this weekend followed later in the month by the play-offs.

But the league winners will be decided by Sunday, May 5.

Chris Richardson, 44, is part of a family who worked in the fishing trade for nearly 100 years in the town of Fleetwood.

The dad-of-five and his family have long-supported local football club Fleetwood Town FC, nicknamed the Fishermen, who sit 12th in League One.

The firm sponsored the club last season – and their logo appeared on the back of players’ shorts.

Thriving local business The Fish House sees him run a restaurant, a takeaway and supply fish to chip shops across North Wales and the North West.

Chris, who was once a ballboy for the club, said: “My grandfather and great grandfather were fishermen.

“My grandfather was a chief engineer on trawlers so we are continuing the fishing legacy.

“I started selling fish in 1974 on local markets throughout Lancashire and Cheshire.

“Now we buy in cod and haddock and supply it to fish and chip shops across North Wales and North West.

“But the industry has changed over the years we now get a fish from further afield in Norway and Scotland.

“It was caught locally until the early 90s.

“The demise of industry started when European quotas started changing and the government offered to decommission trawlers.

“Fleetwood was a thriving port.”

The small business has three members of staff and is popular with the club which is nicknamed The Potters after the city’s long history with the trade.

The Potters sit 16th in The Championship.

“Pottery making was at its height in the 1930s/40s but it meant pottery workers had to work long hours, six days a week.

“As Stoke City became more and more successful pre-war, Pottery companies began to let their workers out early Saturday afternoon so they could go to the match.

“Just to make sure, Stoke’s usual kick-off time was traditionally 3.15pm – not 3pm – to allow the workers more time to get there.

“Pottery making has declined steadily since the last war in Stoke-on-Trent, and the remaining pottery companies concentrate on niche markets rather than the previous mass-production.”

Stoke is made of six towns, together known as The Potteries. One of its main shopping centres in Hanley is called Intu Potteries.

Business owner Anita Harris says there’s lots of small pottery businesses which don’t have the funds to promote themselves.

She said: “The pottery industry is still quite busy in Stoke – our pottery is sought after because we are known for the beautiful vibrant reds we produce.

“It has always been prominent in Stoke right the way back to Victorian times.

“It was the capital of ceramics and it can’t be beaten on tradition.

“But it’s sad that businesses don’t have the budget to promote themselves – there are lots of small pottery firms.”

Tony White works at Pittards which has produced high-quality leather, specialising in gloves, since 1826 in Yeovil.

The local club Yeovil Town FC is nicknamed The Glovers and are currently in the relegation zone meaning they could be forced out of the English Football League.

Tony has made gloves at Pittards for 20 years and has supported the club since the ‘70s.

Tony said: “I have supported Yeovil Town for a long time – it goes way back.

“I was interviewed on TV when Man Utd played Yeovil in the FA Cup last season [a game Utd won 4-0].

“Another highlight of my time as a supporter is when Yeovil reached the League One play-off final in 2013 when they were promoted to The Championship.

“The most enjoyable part of my job is the people and the banter.

“There is not really a set routine to the day – each day is different.”

Reuben Patterson, 25, is a chairmaker based in High Wycombe, Bucks.

Local team Wycombe Wanderers, currently 18th in League One, are nicknamed The Chairboys.

Reuben, who works for furniture manufacturer Bates and Lambourne, said: “I have been at this company for eight years, starting from when I was 18.

“I was never particularly academic but have always been good at building things so I left for college after year 11.

“Wycombe has a long history of chairmaking.

“One of my colleague’s great-great-granddad was a local chairmaker.”

High Wycombe was the chair making capital of the world in the 19th Century, famed for its Windsor designs.

Stuart Mitchell, 49, creates bespoke knives and ceremonial swords in the city of Sheffield – where local club Sheffield United is nicknamed The Blades.

The club, located at Bramall Lane a 30-second walk from his workshop, reflect the city’s long association with the steel trade and producing cutlery.

But crosstown rivals Sheffield Wednesday, who they battle each year in the Steel City Derby, originally held the nickname until 1912 before becoming The Owls.

Sheffield United are currently second in the Championship while Wednesday are in ninth, fighting for a play-off spot.

Stuart began in the steel industry aged ten but his family have been involved since the Victorian era, working in design and production.

He first learned how to craft knives for his mum’s business, Pat Mitchell Cutlers, which was founded in the 1950s.

Sheffield was established as one of England’s main industrial cities during through the 18th, 19th and 20th centuries.

But it entered decline in the 1960s, forcing the sector to streamline its operations and lay off the majority of local employment.

It has become largely automated and employs far fewer staff than in the past – after causing a huge rise in the city’s population between 1801 to 1951.

Stuart has learned to adapt by crafting specialist blades with personalised engravings at his one-man workshop – and he has a constant flow of customers.

Stuart, who has an 11-year-old son, said: “I started working in this industry when I was ten and that’s how I’ve learned my set of skills.

“The industry is very quiet these days which is why I made the decision to move from producing cutlery into bespoke. 13 years ago.

“I make knives and ceremonial swords with engravings.

I started my full-time employment with my mum and dad at the age of 15, straight into the trade.

“The business, set up in 1950s, was called Pat Mitchell (Cutlers) after my mum Patricia.

“An increase in competition from overseas has meant I’ve adapted over time.”

David Johnson owns The Saddle Company in Walsall where the local football club is nicknamed The Saddlers.

Walsall FC are currently in a relegation fight in League One.

The master saddle maker, 68, has worked in the industry for 53 years.

He said: “Walsall has always been the centre of the leather industry and especially saddles.

“But the industry has been shrinking over the last 20 years as a result of competition from abroad.

“I employ ten people – there’s less competition in Walsall but more competition from abroad such as China and Argentina.

“We are highly-skilled and leaders in our field despite not being as powerful as we were before
We export about ten per cent of products.

Saddle makers lived on the back of their reputation for quality in the 50s.

“These days we are trying to do different things using different materials such as synthetic.”

A shopping centre in Walsall, West Mids, is named Saddlers.