By Jack Peat, Editor of The London Economic A damp afternoon in South East London welcomed Graham Fenton’s travelling army of Tynesiders. As Wembley is prepared to host Chelsea and Spurs in the Capital One Cup the quarter final of the FA’s non-league trophy is about to get under way at Welling United’s Park View […] 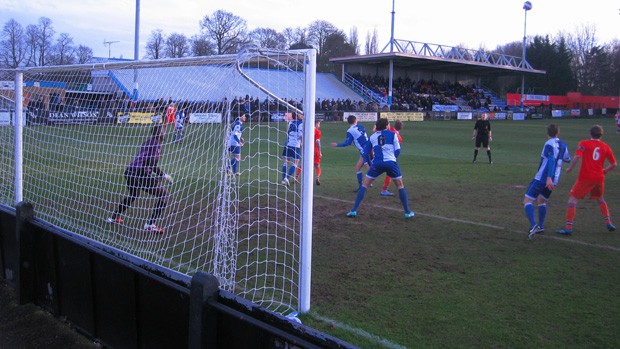 A damp afternoon in South East London welcomed Graham Fenton’s travelling army of Tynesiders. As Wembley is prepared to host Chelsea and Spurs in the Capital One Cup the quarter final of the FA’s non-league trophy is about to get under way at Welling United’s Park View Road Stadium as Erith and Belvedere of the Southern Counties East League play host to the Northern League’s North Shields.

The Robins have made easy work of a tough set of fixtures to reach the last eight, beating Phoenix Sports – top of the Southern Counties East League ahead of Erith and Belvedere – 4-1 at home in the previous leg in front of a packed Daren Persson Stadium. Erith and Belvedere, who were exempt from the preliminary rounds, struggled in the first round proper, narrowly beating Eastbourne Town after extra time, but the Dares come into the quarter finals on a good run of form winning eight of their last ten games and suitably rested after their mid-week game was postponed.

Park View Road has been used by Erith and Belvedere in a groundshare agreement with Conference Premier outfit Welling United since ’99, with improvements made to the stadium last season in order to maintain Welling’s standing in the top league of the non-league pyramid. Whether or not a renovation of their drinking facilities was part of that remit I don’t know, but the Wings sports Bar proved to be a cracking venue for a pre-match pint with various Sky Sports channels playing on TV screens that litter the room.

The game got off to a lively start with both teams moving the ball well in the early exchanges. Shields looked like a team full of confidence which exuded from the progressive style of play and the chants from the terraces, “Tell mi ma mi ma, I won’t be home for tea, we’re going to Wembley” reverberated from the impressive following of away fans. #

But for all the positive football Erith and Belvedere were able to suppress the pressure in the centre of the park with Shields forced into long-range shots and speculative crosses into a deserted penalty area.

After a goalless first half Shields came out with more conviction in the second period, keeping the ball on the deck and using skilful exchanges that clearly troubled Erith and Belvedere’s defence. Within the opening five minutes the Robins broke down the middle and Dean Holmes coolly slotted home to the cheers of about 25 per cent of the travelling fans, most of whom were still enjoying the South London hospitality.

The Tynesiders doubled their league not long after with some great ball control down the flanks and a neat finish from Adam Forster, making the most of a tight angle to give Shields a lead that was no less than they deserved from their second half performance.

Erith and Belvedere struggled to mount a significant threat in response and a classy Shields were able to see out the game in relative confidence. They looked real contenders for Wembley in May, but with an away trip to Cornish outfit AFC St Austell on the cards in the semis, a near 900 mile roundtrip could stand in the way for the Robins.