By Math Morrison  Yesterday two sets of football fans united off the pitch for a protest march. Charlton Athletic and Coventry City fans stood shoulder to shoulder in protest against their respective owners, owners who through their clueless knowledge of football seem hell-bent on running their clubs into the ground. Fifteen years ago the same two teams […] 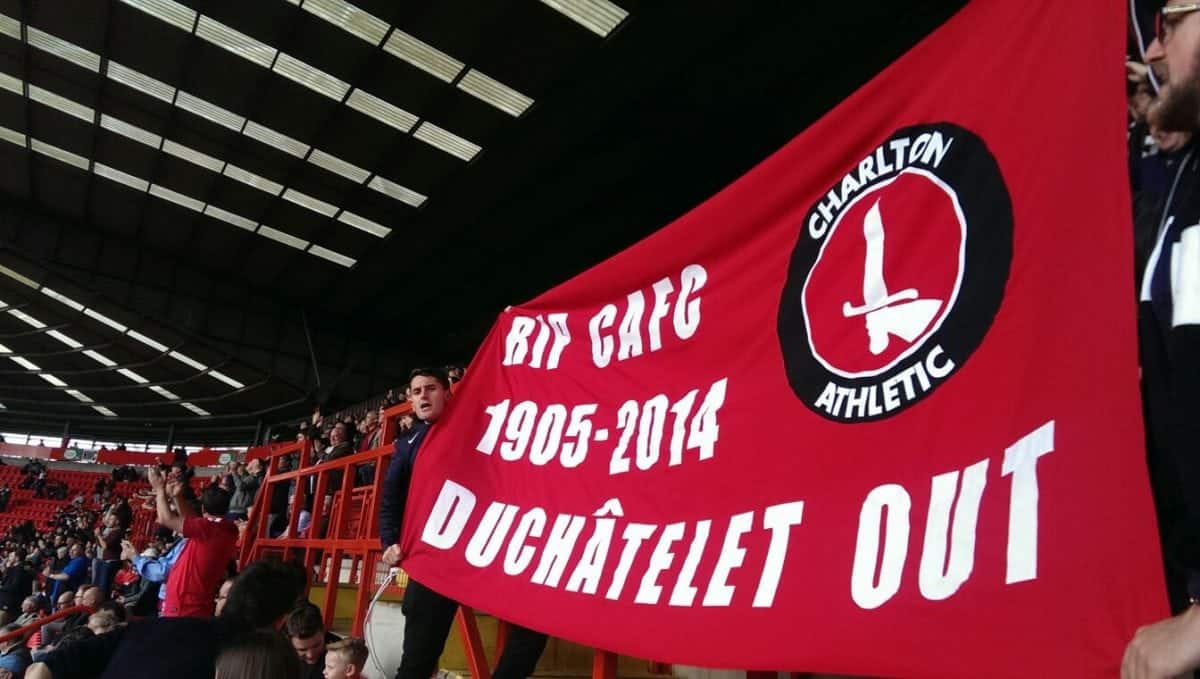 Yesterday two sets of football fans united off the pitch for a protest march. Charlton Athletic and Coventry City fans stood shoulder to shoulder in protest against their respective owners, owners who through their clueless knowledge of football seem hell-bent on running their clubs into the ground.

Fifteen years ago the same two teams met in in the Premier League, yet this weekend the clubs meet in League One, the third tier in English football. The going-ons off the pitch has seen match attendances dramatically tumble at both clubs. Charlton have lost 4,000 season ticket holders this season and Coventry have seen their gates reduced by 25 per cent as many supporters are choosing to vote with their feet.

While neither Charlton or Coventry are seen as glamorous football clubs, they are both well established clubs with rich history, a history which is being jeopardised by misguided owners. Sadly it is all to common now, owing to the fortunes that can be found in the Premier League, for green eyed owners seek to take football matters in to their own hands, many without any real clue in how to run a football club. Blackpool, Leeds United, Blackburn Rovers and Leyton Orient have all seen fans protesting against their owners over the past 12 months. No doubt we will see more emerge this season too. Charlton were bought by Roland Duchâtelet at the beginning of 2014. He began his tenure by selling some of the better players and replacing them with lesser players from Duchatelet’s wider football network. Not long after that the club stalwart and manager Chris Powell was sacked and rumours started spreading that Duchatelet was involved in picking the team, something that he has strenuously denied. There have been no fewer than seven managerial changes, as well as long standing backroom departures. It culminated with Charlton finishing 23rd in the Championship last season and being relegated after only four seasons in the league. That, muddled with a sense of growing despair, prompted Addicks fans to form CARD, the Coalition Against Roland Duchatelet. an umbrella organisation for Charlton supporters’ groups campaigning to rid owner Duchatelet from the club. Coventry City’s fans on the other-hand have had to endure nine years of punishment. SISU, fronted by Joy Seppala who purchased Coventry City back in 2007, have mismanaged the club into a state of disrepair. Fans see the club as huge mess right now, a club with no direction. They are a club with no ground of their own, having to pay rent on the Ricoh area, a contact that is due to run out in 2018. Off the pitch they are involved in complicated court proceedings with Coventry Council regarding a £14 million loan from 2013, a court case that they have lost twice already. They are also involved in another case regarding the purchase of Ricoh area by Wasps Rugby team. The club is on the verge of losing their academy set up when they will have to leave their current home next year. Fortunes on the pitch are not much better either. The team are currently rooted to the bottom of League One with only one win in 11. Yesterday ‘Fighting the Jimmy Hill Way’, a collaboration of Coventry City fans who want SISU to put Coventry City up for sale, joined ranks with CARD, to march on together against their clueless owners. Football owners come and go, just as players come and go, managers and even grounds. But fans are here to stay. A football club is its fans, its band of loyal supporters, and its a wonderful thing to see fans marching together, putting pitch rivalries aside to fight for the greater good.