The Devil's Stone Inn in Shebbear, Devon, is said to be one of the most haunted pubs in Britain 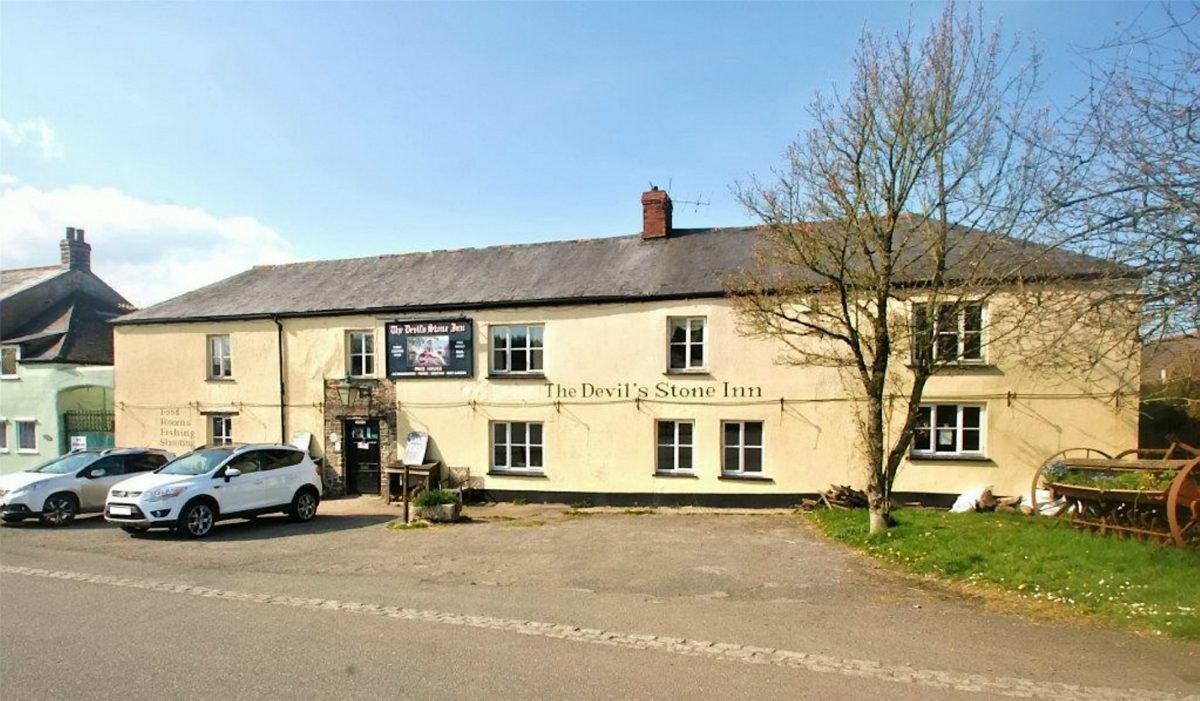 The Devil’s Stone Inn is said to be home to a number of ghosts but could now be passing over to a new owner.

Located in Shebbear, Devon, the pub is named after the village’s unusual tradition of annually turning a one-tonne stone.

It is said that the stone fell from the devil’s pocket as he fell from Heaven to Hell, and turning it keeps evil spirits at bay.

The stone is located opposite the pub, near the village church, and is a type not found anywhere else in Europe.

The Devil’s Stone Inn is said to be attached to the church by a hidden tunnel.

The pub is currently for sale at an asking price of £450,000 and has a bar, games room, function room, eight letting bedrooms plus owner’s accommodation.

The pub is described as a characterful village inn comprising of eight letting bedrooms, one private bedroom, and a beer garden.

Dating back to the 17th Century, the Devil’s Stone Inn also benefits from a games room, 30 seater restaurant plus an overflow room.

The pub is a beamed and flagstone-floored building with several open fireplaces and ample parking.

The sales brochure reads: “In the heart of the West Devon village of Shebbear on the edge of the village square, the pub is in an eye-catching position which is easily accessible to tourists and locals alike.

“Shebbear is a thriving village offering a pleasant atmosphere with a historic church, general
store/off licence and a private school: Shebbear College.”

A former farmhouse, the pub was converted into a coaching inn 400 years ago.

The pub fronts onto the village square is a free house. The current owners are selling up so they can retire.

The brochure continues: “The pub is in the heart of the village and is famous for the turning of the stone – namely the ‘Devil Stone’ which is turned on the 5th of November every year.

“The stone is 6ft x 4ft and is said to weigh a tonne. Legend has it that when the stone is turned the village will be safe from harm in the forthcoming year.

“The pub is also reputed to have a tunnel from the pub function room to the village church. It
is also reputedly one of the most haunted pubs in the United Kingdom.”

On Tripadvisor the Devil’s Stone Inn has a rating of four out of five, and many of the comments are from visitors who went looking for ghosts, but were unsuccessful.

One review reads: “An old coaching inn reputed to be haunted which we used as a base for an extended golf weekend” and is titled simply: “We saw no ghosts”,

Local legend says the Inn is haunted by a young girl aged around seven-years-old.. In 1982 a student staying at the pub saw her in his bedroom, accompanied by a grey bearded man.

Another visitor came across her in the upstairs toilet. By all accounts, however, she is considered to be a friendly ghost.