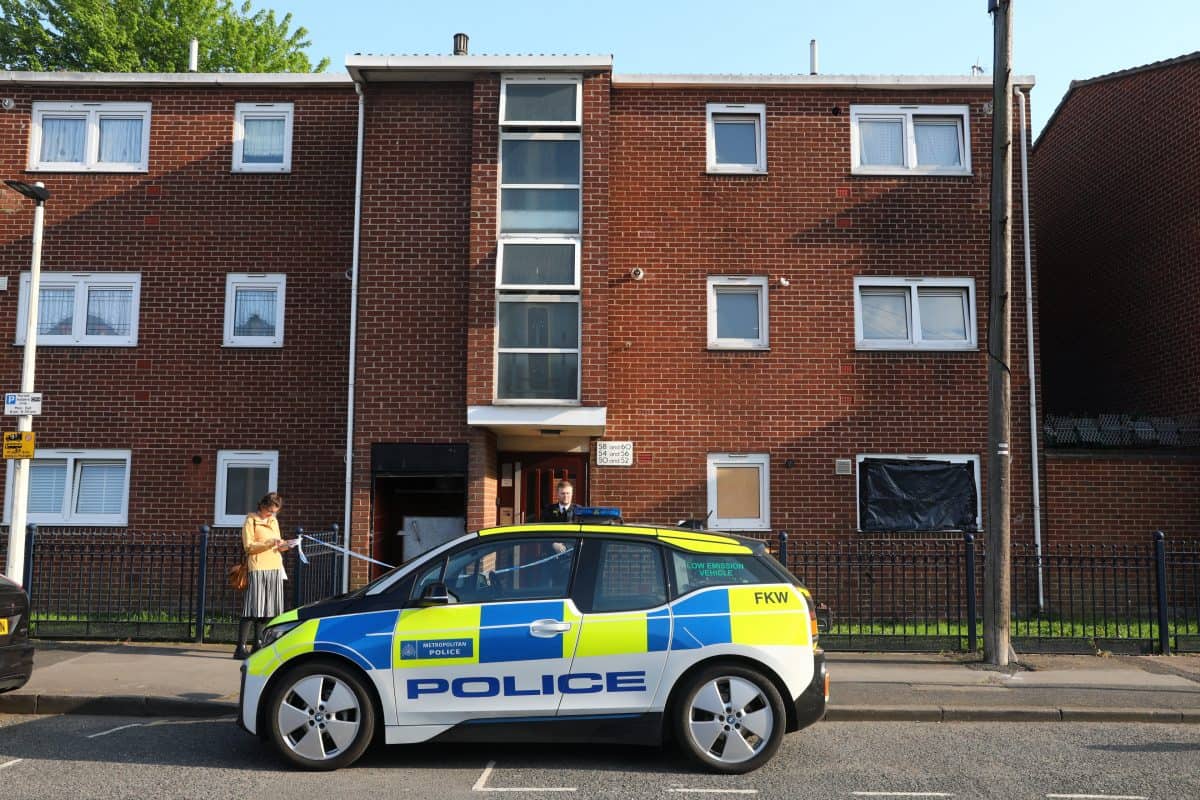 Murder squad detectives are searching three addresses in the capital after the bodies of two women were found stuffed in a chest freezer in east London.

The two were found piled on top of each other in a chest freezer and they were so frozen it will take ‘a week’ before they can be identified.

They were found crammed inside the ‘not particularly big’ freezer ‘with their clothes on’ in Canning Town, east London on April 26.

Detectives are searching two addresses in east London and another one in Ladbroke Grove.

Detective Chief Inspector Simon Harding said in his 28 years he had encountered many crime scenes, and this is “completely unusual”.

Speaking outside New Scotland Yard he said: “It is a completely unusual scene. We would ask the public to bear with us.

“My offices are working 24/7 to identify who these women are.”

When asked how long he thought the bodies had been kept in the freezer he said: “It is difficult to say at this stage.

“Honestly it is such an unusual scene I haven’t seen something like this where you have the nature of two bodies frozen as they are.

“They are clothed and that is also causing a complexity to it as we wait to be able to start post-mortem.”

When asked why it is taking so long to identify the bodies he said: “It is just a completely complex situation.

“You have seen the chest freezer that they are in, it is not particularly big, it is one body on top of the other.

“The nature of being in a chest freezer has caused the bodies to freeze so the time it takes to forensically retrieve as they start to thaw makes it complex and just takes time, unfortunately.

“The address is known where people might go in a transit nature and stay one or two days as they do it.

“It has been known that people that go there are users of drugs. It is a council flat.”

When asked the size of the freezer, the officer motioned with his hands the width of around three feet.

DCI Harding refused to comment on whether the bodies had been dismembered or speculate whether the victims were the same age or adults – but did refer to them as “girls“.

The senior officer said: “We have got three scenes under control in London, two in East London and one in West London – St Ervans Road W10.”

Describing how the bodies were found he added: “The officers were there for something else and saw the freezer and opened it, that was a discovery I can’t go into detail.

“We still have somebody in custody. We have been given extended time to question them.

“There is also the idea that some people might not have been reported missing.

“Without describing what is unfortunately a terrible scene, it is just not possible at the minute to make an identification.

“I can’t say how long the bodies have been there at the moment, not because I don’t want to, the idea is because of the complex nature of phrasing it is not allowing me to put a time dates on it.

“We could be a week away from identifying them, we have done the conventional DNA checks and they are not known to us.

“Everybody that comes to that address we are trying to find them to make sure they are safe and well.

The officer denied claims that the house was a crack den,but did say that drugs were quite possibly used there.

In a statement read out he said: “I have encountered many crime scenes over 28 years and this one of the most challenging and complex to deal with.

“At the heart of this investigation are two women who were found inside this address and my primary focus is to identify them and inform their families.

“I can assure you that we are doing this as fast as is possible given the circumstances using a number of approved methods as part of formal identification processes.

“It is so important for these women’s families that we are 100 per cent sure who the victims are before we name them and I would respectfully ask that people refrain from speculation and attempts to confirm their identities while this work is ongoing – this is not helpful and accentuates an already distressing situation.

“The post-mortem examinations are scheduled to begin on Friday, 3 May but it is unlikely we will get a cause of death and a clearer picture of how these women died for some days given the challenging conditions in which they were found.

“I have a full homicide team working day and night on this case and we are continuing work to build up a comprehensive picture of activity that took place at this address in Vandome Close.

“We know it is a property that various people used to stay at, transient members of the community who moved from address to address.

“It is also linked to drug activity. It is too early to say whether either of our victims had a similar lifestyle and again I would ask people to be respectful and not speculate.

“I would appeal to anyone who has visited this address over the last year, or has information about people who frequented the property to come forward and speak to my team.

“I am aware that casts a wide net in terms of my appeal but we do need to build up an accurate picture of life at that flat and what occurred there.”