"I know I'm not alone and there are lots of people who don't know what to do, and this is a simple thing they can do to show they stand with Ukraine." 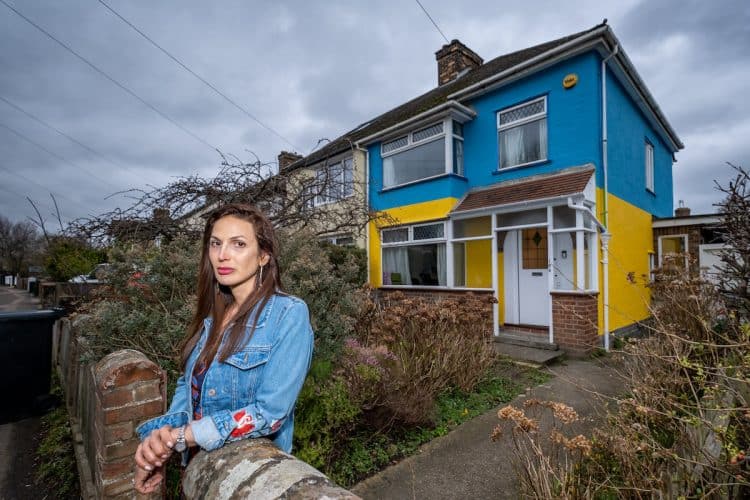 Rend Platings outside her house in Cambridge, Credit:SWNS

A woman has painted her house the colours of the Ukrainian flag to show her support for the war-torn nation.

Rend and husband Michael Platings spent all of Sunday (27/2) repainting the front of their semi-detached home in Cambridge blue and yellow.

“We just wanted to express out support for them and let them know we’re not forgetting about them, and they’ve expressed their appreciation.”

Mum-of-one Rend is from Iraq so understands first-hand the horrors of living through war, and also has many friends in Ukraine.

She said: “My brothers were conscripts in the Iran-Iraq war, that was not their choice and there was a long time we were separated and I didn’t know if they were alive or dead, it was very worrying.

“Most problems seem very trivial at the moment, most things are not really that bad when you sit and analyse them.

“But war is one of those things, from my experience, that the more you sit and analyse it, the more horrendous it is.

“That experience has made my heart bleed for the people in Ukraine right now who are facing this assault in their home.”

Charity founder Rend pursued fertility treatment in Kyiv after the pandemic made it difficult for her to access IVF treatment in the UK.

Their strong connection to the country motivated Michael to re-paint the front of their £400,000, cream-coloured home, while Rend was at a rally.

He spent all day painting with a neighbour’s help, spreading the contents of two five litre pots of paint they bought for £76 across the face of their house.

Rend, who has an eight-year-old daughter, said: “It’s very very sad, I don’t want to even imagine people what people are going through over there.

“Part of me feels guilty that I’m not able to help more.

“They are just so brave, so incredible, and have the strength of character and stubbornness – in a good way – has been really heart warming and it’s very humbling.

“Whenever I think about moaning about the rain, this puts everything in perspective, nothing I can experience in England right now can compare with their experience.”

While most neighbours have been supportive of the splash of colour in the area, the couple have received mixed responses.

She said: “Most people get it, they get why the house is suddenly blue and yellow, but some people, particularly older people, say ‘that’s nice and bright!’

“We’ve had people beep their horns and lots of people stop and take pictures –
we’ve had really warm responses.

“You can’t necessarily paint your house blue and yellow, it’s not practical, but just having a Ukrainian flag on your window and showing some support that way can make a big difference.

“It shows a degree of public concern and support, how it’s not just Ukrainians but the whole nation wants to help Ukraine as much as we can.

“I know I’m not alone and there are lots of people who don’t know what to do, and this is a simple thing they can do to show they stand with Ukraine.”

Related: The Russian property market hotspots with £500m in bricks and mortar value