"Why won't you give that £2 million back that Putin-linked people gave to your party?", the Labour MP asked. 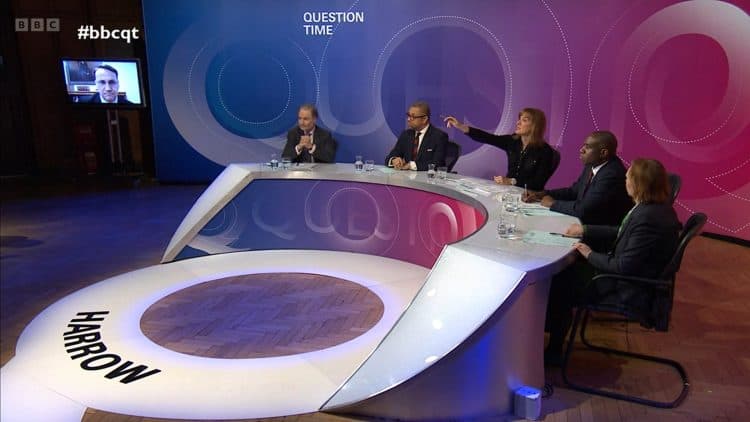 Labour MP Lammy said: “I’ve got to be a bit critical because the authoritative piece of work on the resilience that our country needs was done in a cross-party way by our intelligence committee of MPs across the House of Commons and the House of Lords and they produced the ‘Russia Report’.

“And we are still waiting to see that report properly implemented.”

Host Fiona Bruce, 57, asked about what action he wished the Government would take to deal with the ongoing threat of Russia.

Lammy replied: “We need to know who owns those houses where the lights are off in Kensington, 250 houses owned overseas, we’ve got no idea!”

“We need to crack down on those shell companies. We’ve got drug-running in London, with money going round.

“Why won’t you give that £2 million back that Putin-linked people gave to your party?

“And if you’re not going to give it back then give the money to the Ukraine resistance fund.”

Cleverly argued that many of the donations to the party had come from British nationals, but was cut off by Lammy who quipped: “Dual-nationals, many of them.”

However, Cleverly bit back to that comment and said: “Woah, woah, woah. So we’re now writing off dual-nationals? Is that what you’re saying?”

Cleverly went on: “The donations we have received were from British nationals, legitimate donors, registered with the Electoral Commission, and I think you should be very careful at just implying that all Russians are dirty…”

“You know I’m not saying that,” Lammy snapped back, as the argument became even more heated.

Mr Cleverly, who has family from Sierra Leone in Africa, also argued he would be “deeply offended” if people were to imply all Sierra Leoneans were “dirty” because of the corruption sometimes associated the country.

He added: “To suggest that all donations from Russia are somehow dirty because some Russians are corrupt is deeply, deeply racist and if you are to do it against any other racial group you would be pilloried.”