Boris Johnson could wave quarantine rules for thousands of Uefa and Fifa VIPs. 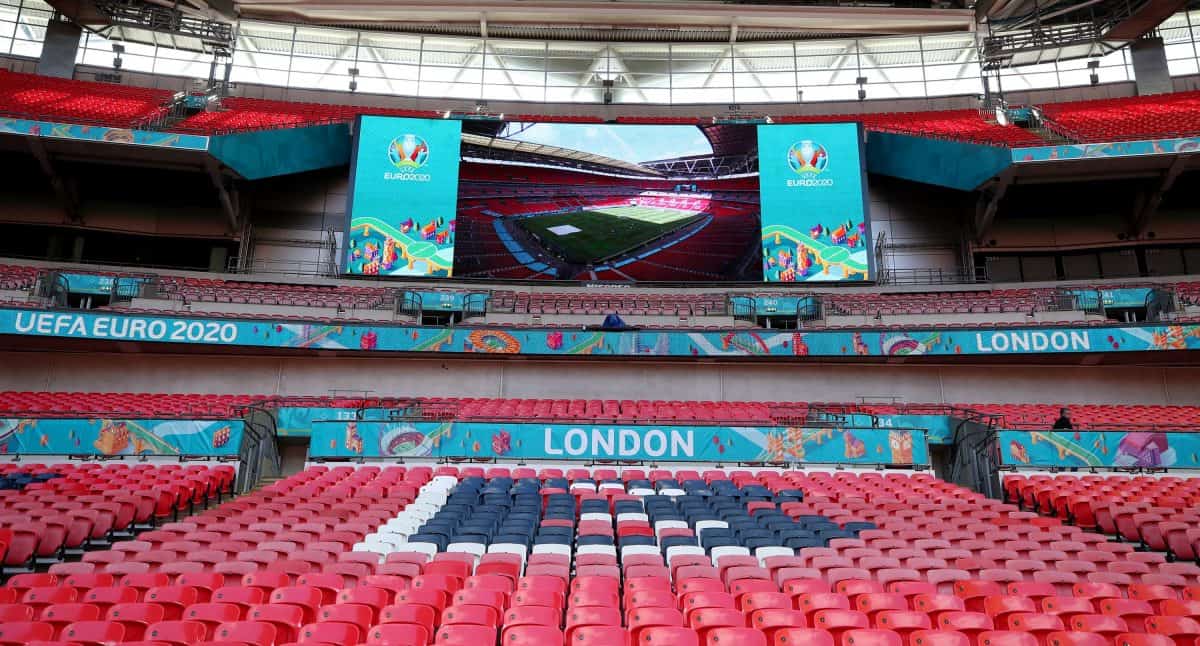 Thousands of VIPs could be let into England without having to quarantine under plans to stop the final of the European Championships being shifted from Wembley.

Ministers are reportedly considering a proposal to exempt Fifa and Uefa officials, politicians, sponsors and broadcasters from having to self-isolate on arrival – despite concerns over a possible coronavirus spike and a public backlash, The Times reported.

European football’s governing body released a statement on Friday saying it was “confident” the final week would be held in London but pointed out “there is always a contingency plan”.

Budapest is understood to be the first option if the games were switched, with matches at the Puskas Arena currently being played at 100 per cent capacity.

UEFA’s statement suggested it might be possible to admit overseas spectators into London for the final week, using a method similar to that deployed at last month’s Champions League final in Portugal where fans flew in and out within 24 hours.

“At the moment, we are in discussions with the local authorities to try to allow fans of the participating teams to attend the matches, using a strict testing and bubble concept that would mean their stay in the UK would be less than 24 hours and their movements would be restricted to approved transport and venues only,” the statement read.

“We understand the pressures that the (British) Government face and hope to be able to reach a satisfactory conclusion of our discussions on the matter.”

About 2,500 designated VIPs attending games at Wembley would not have to stick to the strict quarantine rules imposed unordinary travellers. They would be allowed to attend knockout matches in London – as well as training sessions and meetings with the government.

However cabinet ministers are understood to be anxious about amending a law on border restrictions at the same time as millions of Brits are unable to take holidays abroad.

Boris Johnson is reportedly drawn to the plan on the basis that it could boost a joint Home Nations bid for the 2030 World Cup. The exemptions would allow the prime minister to meet senior figures from Uefa, as he seeks to secure their backing.

The government confirmed on Monday that the final four Euro 2020 matches at Wembley could be played in front of crowds of at least 40,000 despite the decision to delay the final easing of coronavirus restrictions.

The games will be part of the government’s Events Research Programme (ERP) which has been running since April and has been used to test various ways to get fans back into venues without the need for social distancing.

Currently, overseas fans coming in from countries on the amber list – which the vast majority of Europe falls within – would have to provide a negative test before leaving their country of origin in order to enter the UK and then strictly isolate for at least five days using the ‘test to release’ scheme, or for 10 days.

‘Too early to say’

The Department for Digital, Culture, Media and Sport declined to comment on the UEFA statement, but it is understood its ministers and officials are  focused on putting on safe and secure games and are in discussions with UEFA on the detail.

Euro 2020 tournament director Martin Kallen spoke on Thursday about his hopes for overseas fans to attend the final stages.

“We are in discussion for the knockout rounds, especially the semi-finals and final, on this question to have also overseas spectators,” he said.

“We are in discussion every day with the authorities and we hope to come to a good conclusion with the English government.”

Asked if it was realistic that the government would grant concessions, Kallen added: “I hope so. At the moment it is too early to say it but we have seen some signs that there could be a possibility.

“But it’s too early to give a clear answer, we have still some time on that side.”